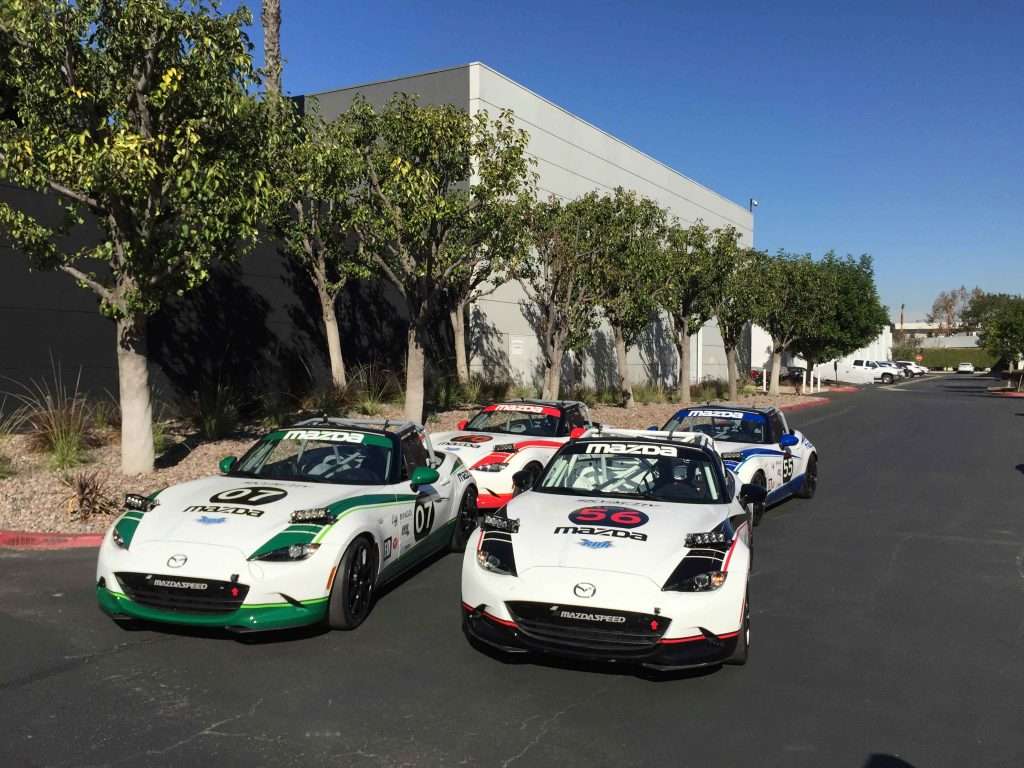 Two years ago, Mazda North American Operations (MNAO) threw down the gauntlet, pitting Mazda employees against Mazda dealers in the longest endurance race in America, the National Auto Sport Association’s (NASA) 25 Hours of Thunderhill. After two years, with the score tied between the dealers and employees, this year is about the bigger picture of teamwork and debuting the new 2016 Mazda MX-5 Cup race car.

“While we joke about the rivalry between the factory guys and our dealers, the truth is that our success is directly linked,” said Robert Davis, Mazda’s senior vice president of U.S. Operations, of the company’s official four-car 2016 Mazda MX-5 Cup entry. “For 2015, we are allowing a very select group of dealers AND employees to race alongside each other in the new 2016 Mazda MX-5 Cup car. While the development testing by Long Road Racing has been superb, nothing compares to a bunch of club racers beating on each other for 25 hours to really test the hardware.”

The team will race four brand new 2016 Battery Tender Mazda MX-5 Cup spec cars, with the only changes being the installation of additional lights for the very dark Northern California track. Since the MX-5 Cup series consists of 45-minute sprint races, this race will be the equivalent of two full seasons of testing per car. BFGoodrich Tires will be supporting the effort along with the Robert Davis Racing team. The pit crew is 100 percent volunteer, mainly Mazda employees, racers and friends.

The twice-around-the-clock-plus-an-hour race will take place December 5 and 6, 2015, at Thunderhill Raceway Park in Willows, Calif. The action will be streamed live for all 25 hours from inside the MX-5 Cup cars at www.MazdaLIVE.com Additional live coverage will be posted to the Mazda Motorsports Facebook page, and via the Mazda Racing Twitter account.

On the driving side, the racers will be:

The four MX-5 Cup cars will line up alongside more than 60 other cars competing in seven different classes, including a dozen other Mazdas. This race, now in its 13th year, attracts an extremely diverse entry list of teams, cars, and drivers from around the world, ranging from professionals to club racers, and from Mazda Miatas to prototype racers.

The price for the turnkey ready-to-race Mazda MX-5 Cup car is $53,000. Long Road Racing began production last month and will be busy during the off season with more than 70 orders in hand. Details for the ordering process, including financing options, are available at www.MazdaMotorsports.com. Additional information on the MX-5 Cup can be found at www.MX-5Cup.com. You can follow the progress of the 2016 Global MX-5 Cup car development on the new Twitter handle: @GlobalMX5Cup