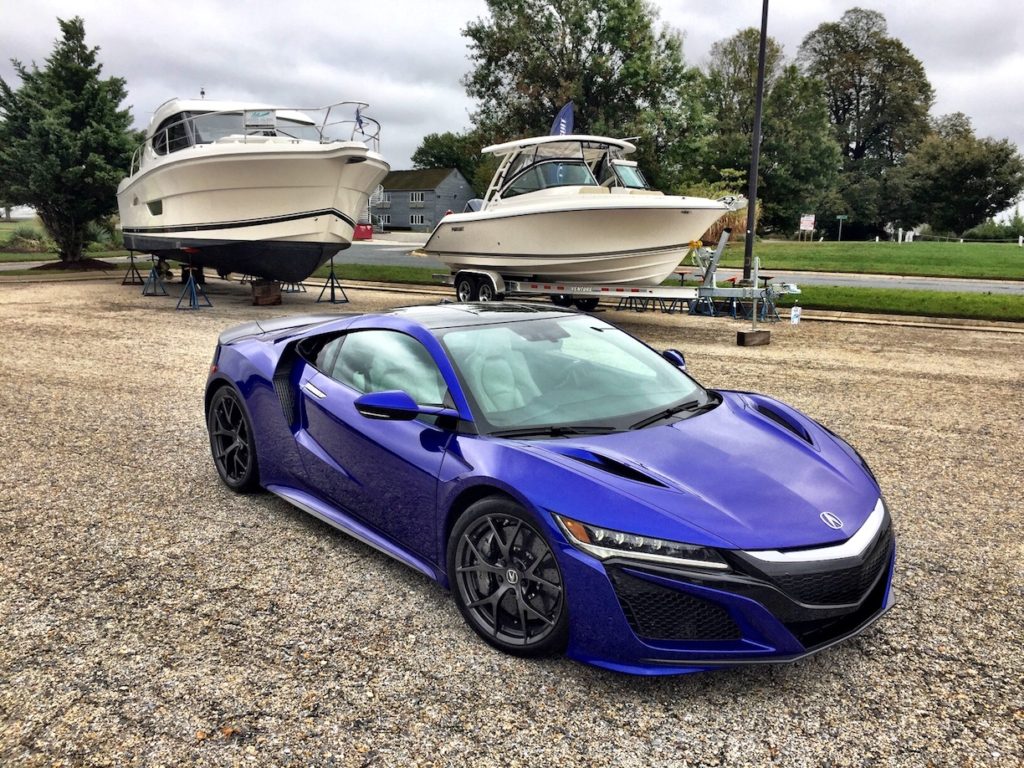 The Washington Automotive Press Association’s 2017 WAPA Rally at the Chesapeake Bay Beach Club in Stevensville, MD last week was pretty epic being that it featured the highly awaited supercar from Acura. I can’t say the NSX stole the show due to the fact that the opulent Rolls-Royce Wraith Black Badge was present as well, but it certainly highlighted the afternoon for a few automotive Blade Runners selected to pilot the Japanese machine. Nonetheless, my time slot behind the wheel was pretty empowering as the NSX felt like strong winds blowing by in the form of storms.

Acura is a scientific anomaly, going the route of Porsche where they produce serious output and supreme power from smaller packages. To honor the present you have to respect the past, and in this case Acura’s NSX heritage was manifested 25 years ago with a vision to evolve the performance-driven sector with a lightweight vehicle that was cleverly styled, technologically engineered, and ergonomically advanced. Though it took a hiatus for some time the DNA from the original work of art can be found in the latest 2017 NSX (aka New Sports eXperience) which is an explosive vehicle running the streets and embodies typical supercar traits for success from handling and braking to acceleration and weight reduction. 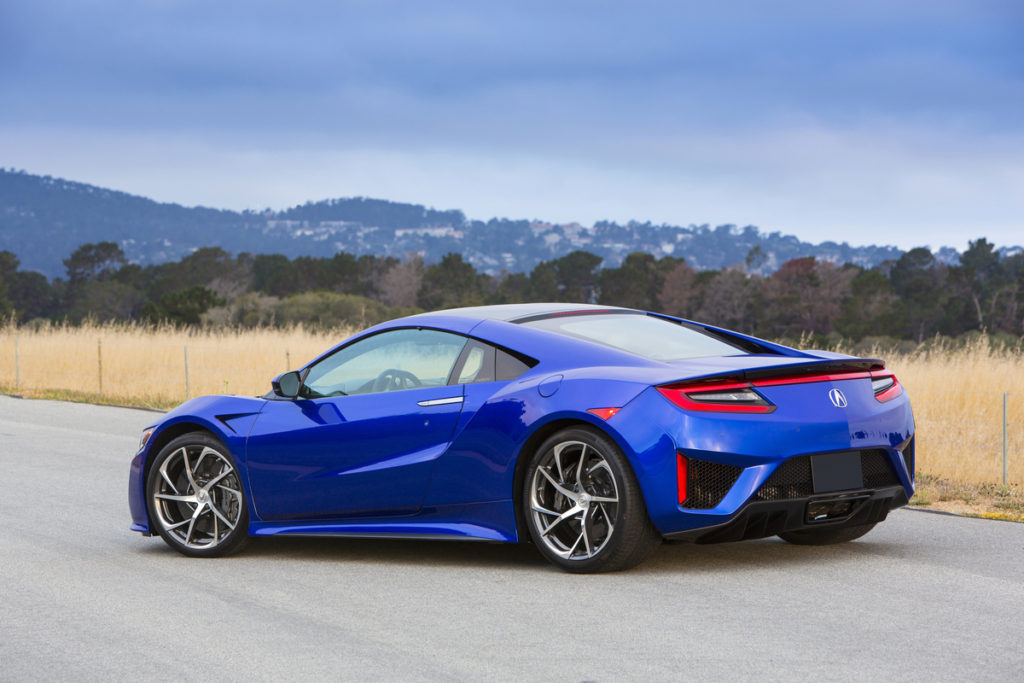 Back in Stevensville for testing company executive Chris Naughton showcased a Nouvelle Blue Pearl ($6,000 custom color upcharge) exterior and Orchid interior NSX that tallied $204,600 after upgrades and added packages. MSRP is $156,000 excluding the $1,800 destination and handling fee. More importantly, the NSX is the first Acura built-to-order and allows customers to customize their dream car online for a dealer to send away to the factory to undergo the automotive equivalent of neurogenesis. Yes, the NSX is a bit smaller than I like my sports cars and kept some taller journalists from experiencing, but it certainly is special.

The nucleus of this vehicular organism is a midship 3.5-liter V6 DOHC Twin Turbo engine and 3-mode Sport Hybrid Super Handling All-Wheel Drive (SH-AWD) commingling electric motors, batteries, the engine, transmission, and control systems for a combined 573-horsepower and 476 lb.-ft. of torque. It’s paired with a Direct Drive Motor (electric) and 9-speed dual clutch transmission (also located in the rear) with steering wheel mounted paddle shifters. Because of the supplemental torque from the Direct Drive Motor and the electric power from the front-mounted Twin Motor Unit, the NSX moves instantaneously upon acceleration while torque vectoring kicks in when needed from the independently operated front left and front right wheels which are each assigned an electric motor. Pretty ingenious! 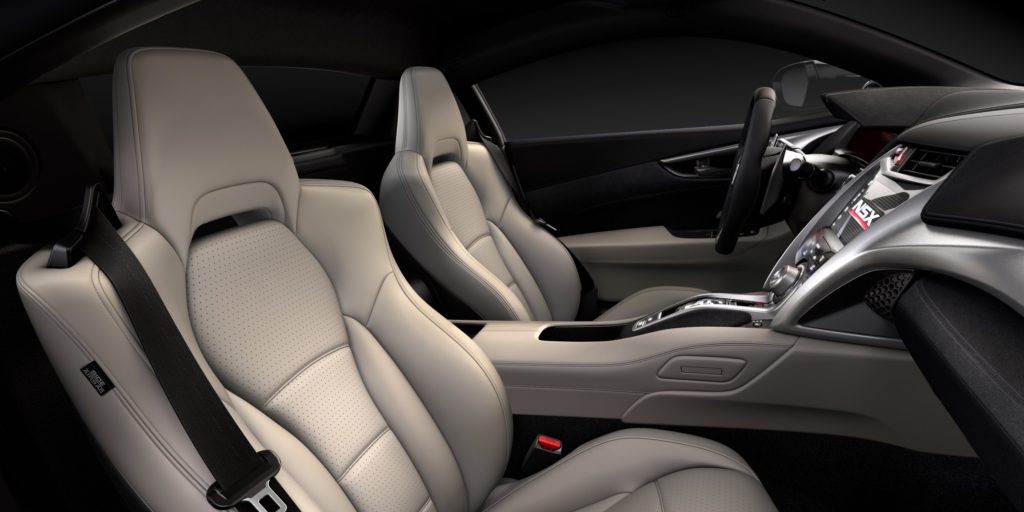 Speaking of the manually adjustable wheel, it is marginally flat on the bottom and the top for precision steering and added legroom. The race-inspired design is thick around the palms and functional enough to allow the driver to operate a faction of the vehicle’s settings. Built and outfitted with Carbon-Ceramic Rotors with Silver Calipers ($10,600), staggered Exclusive Interwoven rims ($1,500) tucked in Pirelli P Zero Trofeo R 305/30 ZR20 rear tires and 245/35 ZR19 front tires, a Carbon Fiber Rear Decklid Spoiler ($3,000), a Carbon Fiber Exterior Sport Package ($9,000) featuring a Carbon Fiber Front Spoiler, Carbon Fiber Side Sills, Carbon Fiber Rear Diffuser, and Dark Chrome Exhaust Finisher, the NSX dances around turns, cuts through wind like a katana dicing fruit, and stops on a dime. Our tester was further highlighted with a Carbon Fiber Engine Cover ($3,600) and a Carbon Fiber Roof ($6,000). Similar to competitive exotic brands from Italy and Britain you will always drop at least another $50,000 in carbon fiber for ultimate performance and adoration. 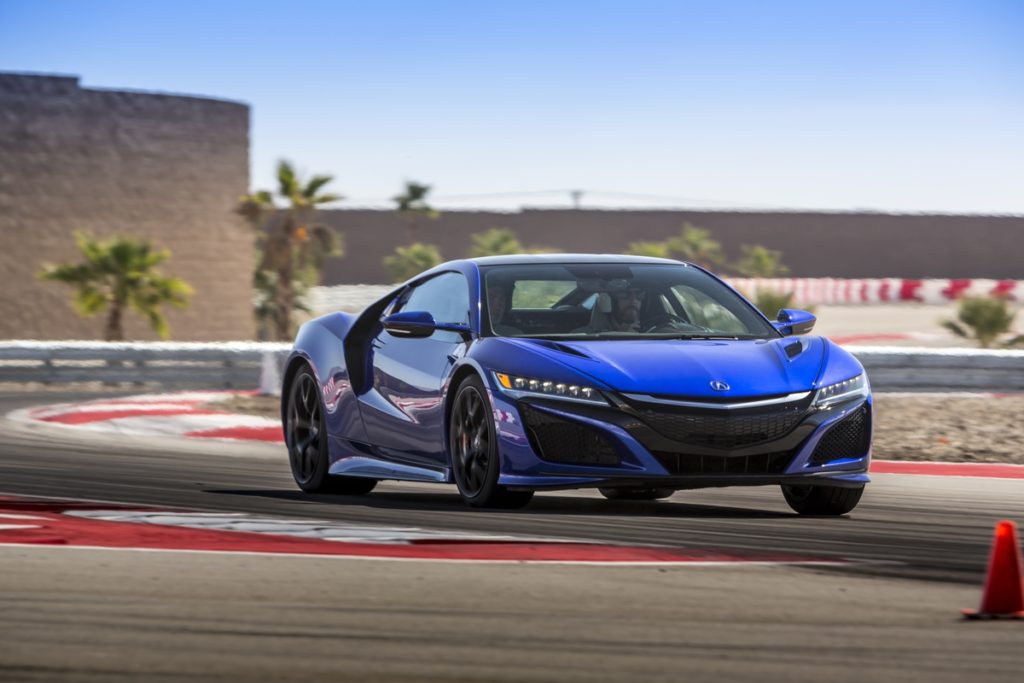 Inside the aeronautical cockpit was an atmosphere ripe with elite and plush materials, advanced gadgetry, and operational systems for both your safety and convenience. I was especially enamored with Active Exhaust and the Dynamic Mode’s rotary dial that let me engage the NSX in various manners including Quiet, Sport, Sport +, and Track mode. Quiet mode for example lets you roll out using only electric power so the NSX doesn’t awaken the entire neighborhood during early mornings while Sport + turns the vehicle into an aggressive and hungry feline as it growls intensely. The Japanese performance car also jumps out of its stance fiercely and quickly like a cat when you reign in its power. Of course you will find modern features like a 7” touchscreen, Apple CarPlay, Pandora, and a 580-watt ELS Studio Premium 9-speaker Audio System ($3,300 with the Tech/SiriusXM) but your attention span will always default to the singing of the 3.5L. Trust me! Semi-Aniline Full Leather Power Seats ($2,500) and a Black Alcantara Headliner ($1,300) topped off the rest of the first-class cabin. 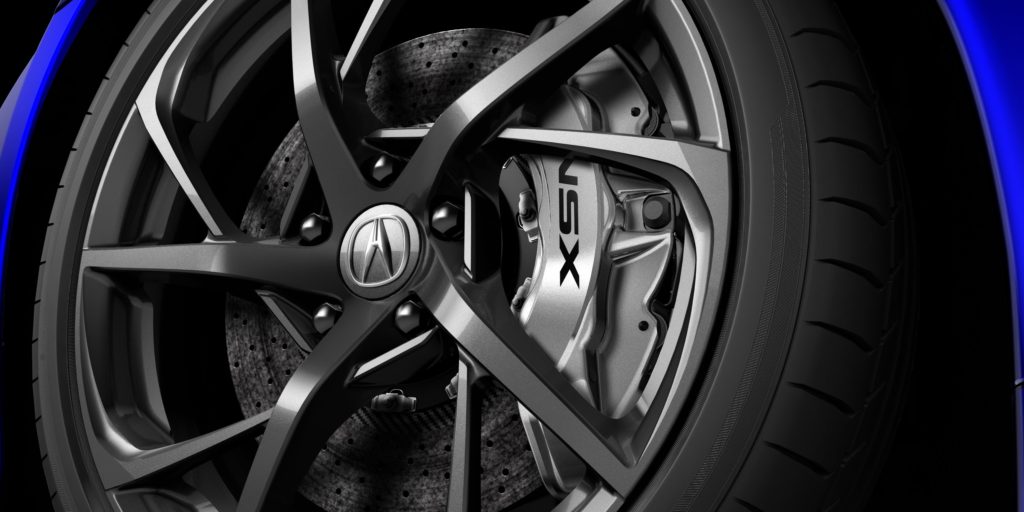 “From the beginning, Acura has always been about performance,” said Acura NSX Global Development Leader Ted Klaus. “Not only speed or power, but elegantly designed and engineered products that stir the soul and harness innovative technology on a foundation of industry-leading quality and reliability.” I couldn’t agree more.