2014 Rolls-Royce Wraith: Where it does not exist, design it!

It’s typical for Rolls-Royce to look backwards before moving forward when contemplation of new model is imminent. With a storied history and a reservoir of creativity at its disposal, the British automaker of bespoke innovations proudly introduced their 2014 Wraith to a cadre of auto journalists recently in Vienna, Austria at the magnificent Palais Coburg Residenz. The superior coupe is now Rolls-Royce’s fastest and most powerful vehicle and will certainly introduce them to a younger, yet still wealthy group of luxury buyers.

Charles Stewart Rolls was only 25-years old when he co-founded the company. With a penchant for distinguished feats and creations, the young pilot became the first man to double cross the English Channel non-stop. This is a testament of Rolls’ unwavering resolve to be the one of the greatest automobile builders of his generation. “Take the best that exist and make it better,” were the marching orders from co-founder Sir Henry Royce. Hence, the eloquent Phantom Series II. It was a task accomplished handsomely. Today, the Wraith honors both men and their impressionable accomplishments. “Where it does not exist, design it!”

Wraith, titled after a mystical Scottish spirit, represents new potential direction for Rolls-Royce and extends its level of luxury, refinement, and hand-craftsmanship, but also presents unique positioning defined by power, style, and drama. Originally conceived in 1938, the rebirth of the current fastback and its perfectly engineered features and technical contour introduces a younger demographic to the British brand. Roll-Royce says they have taken orders from individuals new to the company that hail from the four corners of the globe. 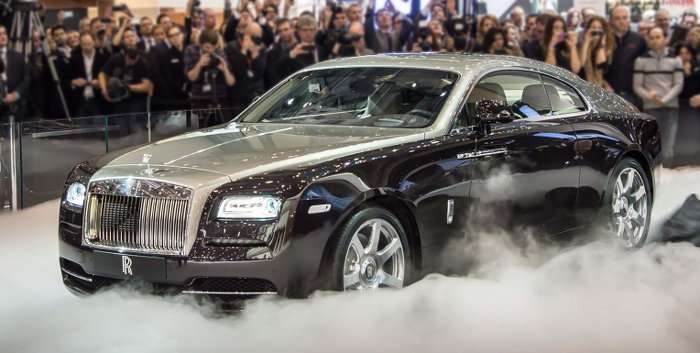 The sleek and vigorous Wraith is purely driver oriented with its Ghost-based twin-turbo 6.6-liter direct injection V12 that now outputs 624-horsepower and a whopping 590 lb-ft of torque. Amazingly, the 5,380 pound vehicle is able to accelerate from 0-62 mph in just 4.2 seconds. With this in mind, the majestic coupe becomes the most commanding Rolls-Royce ever built in the history of the company. It is mated to the 8-speed automatic transmission and air suspension from the Ghost. A new innovation lends itself to the British chariot in the form of a technology dubbed “Satellite Aided Transmission” which adapts to what the road is doing and selects the appropriate gear. For instance, it holds gears in corners and upshifts or downshifts appropriately. The Wraith also benefits from the technological and engineering capabilities of parent company BMW.

It was a lovely day motoring in Austria when we departed from the stately Palais Coburg — where the experience felt similar to what a Roll-Royce customer would be subjected to — in an Infinity Black Wraith in route to the popular Steirereck am Pogusch for lunch along winding Alpine roads. Our vehicle was bespoke, crafted with a Tan Black Interior and Piano Black Santos Palisander veneers. Hallmark coach doors see their way into the Wraith to unmask its rich cabin composed of Phantom-grade leathers and Canadel Panelling wood veneers. The elongated doors close automatically with a touch of a button and still feature an embedded umbrella for rainy days. Once you enter the ultra-rich cabin you instantly become royalty and feel some sort of entitlement. There is simply no way around it. Think about it, it is indicative of Goodwood (Roll-Royce’s home) to independently create each vehicle using the artisan skills of 60 individuals which requires more than 450 man hours to design, construct, and craft. All leathers are hand-stitched and fine woods are carved to perfection. A bespoke touch of imagination is displayed by way of the lustrous evening headliner utilizing 1,340 fiber-optic lamps.

Of course there is enough interior space to ride first-class in the rear while your chauffer escorts you around town. However, this is a true driver’s vehicle and slated for enthusiastic owners who’ll position themselves directly behind the wheel. The only downfall of the sloped roof design is that it limits rear visibility. The Wraith’s mechanical aggression certainly lives up to its numbers on paper. Yes, the vehicle still feels big and drives luxuriously, but it accelerates profoundly and brakes impressively. No, it doesn’t handle turns like a Bentley GT, or zip through switchbacks like a Porsche 911, but it will get you to your destination in style, and do so admirably. The aforementioned and innovative technology dubbed Satellite Aided Transmission applies GPS mapping algorithms to forecast the driver’s next move using current location-based and drive characteristics, and then pre-selects the most suitable gear from the 8-speed automatic ZF transmission appropriate for the impending topography ahead. Remarkable! Keep in mind, the Wraith offers no ability to self-adjust the gears such as with paddle shifters.

Another form of customizing is with the Wraith’s in-house built audio system. The 18-speaker sound package is amazing and kept us vibrant during the 6-hour drive. Dubbed Bespoke Audio, Roll-Royce benchmarked many other systems directly and designed one to their liking. For instance there is one channel for each speaker so engineers could have the capability of modifying each separately. True surround sound is offered by way of two speakers within the ceiling. This $6,500 option took a half-year to develop. More importantly, the Spirit of Ecstasy Rotary Controller (similar to BMW iDrive) operates the multi-media system which is one of the best in the business. Every scheme within the vehicle can be viewed and manually adjusted.

Roll-Royce loves two-toned hues which will been seen on mostly all of their exciting selections. The vehicle sits lower than a Ghost for better center of gravity and features stabilizing shoulders and a fastback silhouette. “Our new car will boldly shape the years ahead for Rolls-Royce, building on the success of Ghost, bringing more new customers to the marque. For Wraith is the ultimate gentleman’s Gran Turismo; it is the car we believe our great founding forefather and adventurer the Honorable Charles Rolls would have chosen to drive were he alive today,” stated Torsten Müller-Ötvös, Rolls-Royce Motor Cars CEO.

It’s currently a moment of introspection for Rolls-Royce as they position themselves for supplementary growth, heightened levels of performance, and enhanced expectations from their loyalists. Expect deliveries by end of the year to early 2014 with a current price of $284,900. Further pricing details will be revealed at a later date.