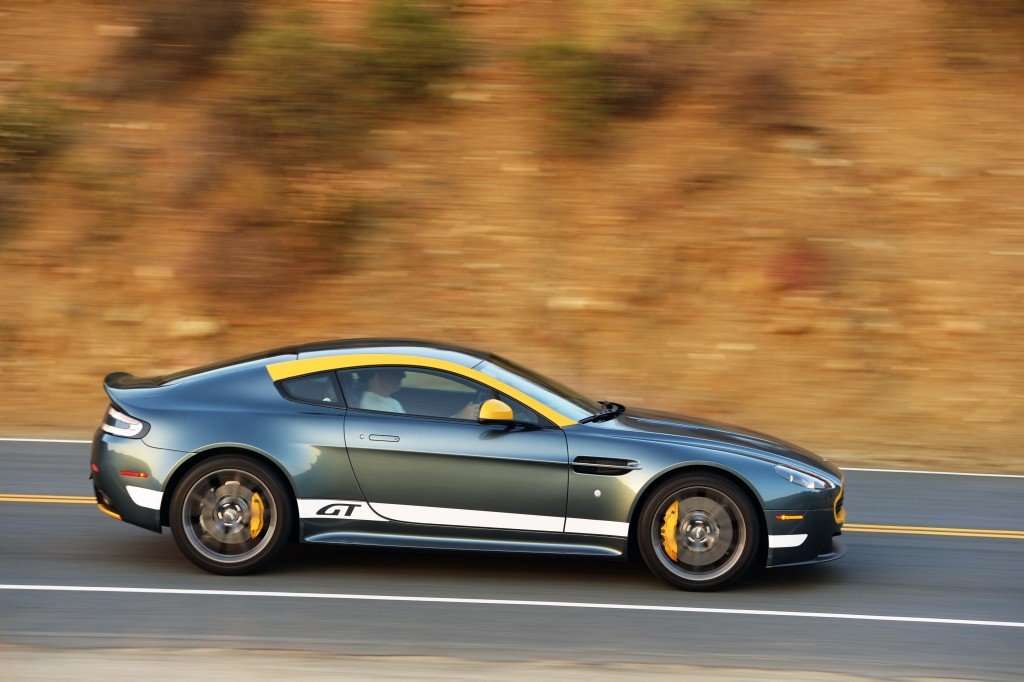 It was a very enthusiastic, compelling and brilliant afternoon when Automotive Rhythms tested the 2015 family of Aston Martins in Westlake Village, California a few days ago. As the purveyor of opulent, gentlemen sports cars, the British automaker from the parish of Gaydon in Warwickshire, England continues to exemplify intellectual strategies required for inherently orchestrating vehicles with unmitigated performance, idyllic, yet urbane cabins, breathtaking silhouettes and characteristics equating to valor and reverence. With that in mind I’ll have a go in the Vanquish Volante which casually escorts itself between destinations in 3.8 seconds per 0 to 60 mph interval.

An Aston Martin (AM) is the consummate vehicle for gratifying your soul with pure driving bliss after a smart day of working or entertaining clients. They are intriguingly attractive, extremely comforting and command auditory attention when they roll by with exhausts fully open. AM states that each car has to sound fantastic even though each is distinctively tuned. Their buoyant, cast-magnesium swan doors slightly rise when opened from the embedded door levers for optimal egress and ingress. Contrast stitching, reverse numbered tachometers, right-sided seat adjustments, one-push engine starter from a glass key and bespoke individualization programs are traditional and distinctive traits of a Gaydon sports car. Whether you like power emanating from a smaller, but progressive V8 or the sanctity of a flamboyant and unadulterated V12 engine hand built by skilled artisans, Aston Martin offers both with various horses and transmissions to engage from.

To explore the 2015 product updates and models changes of the AM portfolio the team journeyed to the planned community of Westlake Village, California where The Four Seasons resides north west of Los Angeles, near Malibu, Santa Barbara and settled close to the Santa Monica mountains. The Valley property is indicative of the lifestyle and means of a typical connoisseur of not only Aston Martins, but also Porsches, Lamborghinis, Bentleys, Maseratis and many more luxuriant auto brands. The driveway and adjacent parking lot was ideal for the fleet of Aston Martin vehicles represented by the new 2015 Vanquish Volante ($302,995), Rapide S Coupe ($204,995), V12 Vantage S Roadster ($199,495), V12 Vantage S Coupe ($184,995), V8 Vantage GT Coupe manual ($99,900) and the V8 Vantage GT Coupe Sportshift II ($105,200). Guests residing at the high-end property set amidst a sea of gardens were enamored by the various display models being interchanged and profiled on the front courtyard each day. 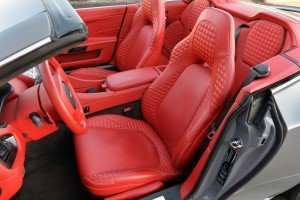 The stunner of course was the China Grey Vanquish Volante crafted with a cavernous Spicy Red interior (including steering wheel, seat accents and seat inserts) and accentuated by a large carbon fiber front splitter, Brembo Carbon Ceramic Matrix brakes painted in red, staggered 20” forged allow rims tucked in Pirelli P Zero tires (305/30/20 rear and 255/35 ZR20 front), a black grille and One-77 inspirations such as the LED taillights and rear diffuser. Lightweight but rigid construction using an aluminum frame and carbon body panels, in conjunction with the new ZF 8-speed Touchtronic III automatic transmission (also used in the Rapide S) and the massive 6-liter 568-horsepower V12 help reduce the vehicle’s 0 to 60 mph time down from 4.1 seconds to 3.6 seconds for the coupe. The Volante achieves the same in 3.8 seconds while the 4-door Rapide S completes the effortless task in 4.2 seconds. The front, mid-mounted V12 also produces 465 lb.-ft. of torque and accelerates to a top speed of 201 mph (197 mph for the Volante). Front spring rates were stiffened 15% and rear dampers rates by 35%. The revised Adaptive Damping System (ADS) with Normal, Sport and Track modes creates multiple personalities for your Vanquish’s demeanor. Around the winding turns of Mulholland Hill the Vanquish Volante isn’t as temperamental as you would expect from a larger two-door sports car. It felt light on its feet and the exhaust is very throaty upon accelerating. Sport mode focuses on the gearing, transmission and the One-77 based exhaust, but is not connected to the suspension setting. Though, the smaller Vantages felt a grade better streaking around bends at the same higher speeds. I asked AM about the lack of a dual-clutch gearbox like most of its competitors and they stated the brand doesn’t tend to be early adapters nor would they add more weight in their vehicles from the heavier transmission. But you will find intelligence in the form of the Touchtronic III’s four drive modes: Drive, Drive-Sport, Paddle and Paddle-Sport. One of the coolest features was the AM’s ability to downshift to the gear of choice to match vehicle speed when braking aggressively. Dubbed, Optimal Downshift, this technology allowed me to pull away without loosing a beat after acceleration out of a turn. 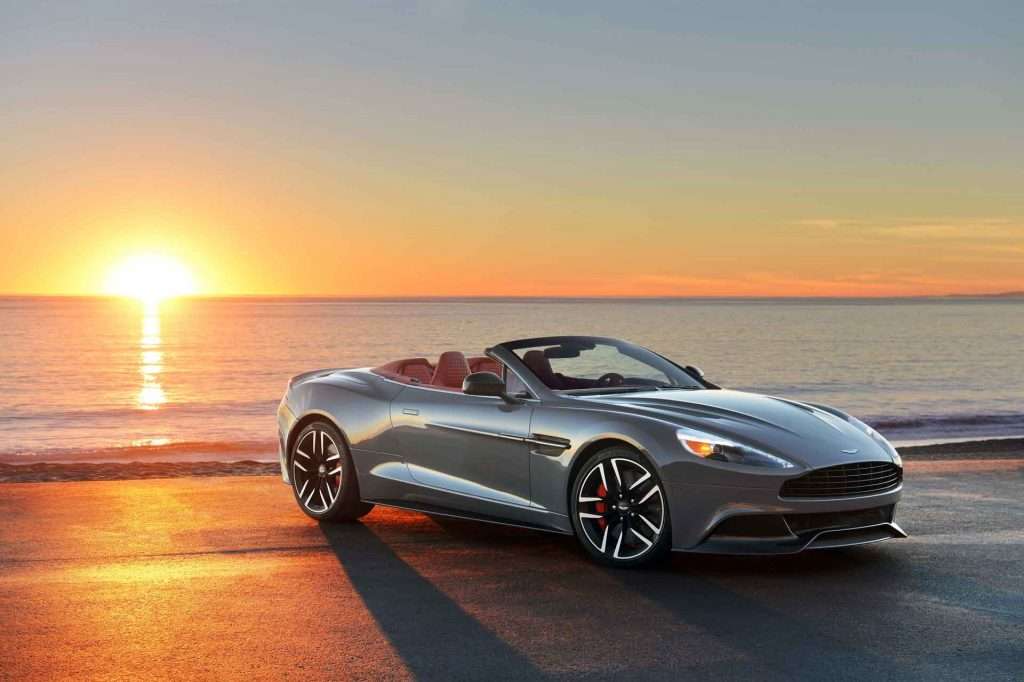 Other Vanquish notables include the immaculate and optional 13-speaker, 1000-watt Bang and Olufsen sound system with dual, dash raising tweeters; an updated multi-media system known as AMi (Aston Martin Infotainment) with haptic touch operations and a pop-up screen and rear back up camera; a perfectly wide dead pedal; and a convertible top that mirrors the outline of the coupe and unfolds in 14 seconds. The optional racing octagon steering wheel from the One-77 is a must-have for those looking for continuous, spirited driving. Keep in mind the rear seats are more for handbags than passengers and the AMi is not as intuitive as systems like BMW’s iDrive or Audi’s MMI but it’s far better than what is found in the Vantages. “More bold and dynamic interior and exterior treatments are the perfect offering for customers of the latest models,” stated Marek Reichman, Director of Design. AM believes they are competitive in the multi-media field, but is also adamant about driver distractions and the onset of too many technologies that may take away from the actual driving experience.

Install the aforementioned naturally-aspirated 6-liter V12 (with 565 horsepower) into Aston Martin’s Vantage model and pure sports performance is in your control. Titled the 2015 V12 Vantage S Coupe and Roadster, the smaller AM moves from standstill to 60 mph in a mere 3.7 seconds (3.9 Roadster) and tops 205 mph (201 mph Roadster). The updated motorsports influenced 7-speed Sportshift III ASM (auto-shift manual) transmission is paired with the beastly V12 to mimic the connected shifting of a manual. The power is flawless but the aggressive shift patterns require time acclimatizing to your style of driving. I missed many upshifts in the beginning which created uncomfortable transmission feedback. After lunch the technician explained that the Sportshift III ASM functions just like a standard transmission and that the driver has to be ready to engage shifts. After adjusting my technique in the Yellow V12 Vantage S Coupe with yellow cross-stitching and yellow paddle shifter trim, the drive felt synchronized. The visibility in this Coupe is extremely low but its design traits are extremely high. Our ride was embellished with four breathable nostrils fixed within the hood, a bold front carbon fiber splitter and a staggered 295/30ZR19 rear and 255/35ZR19 front Pirelli P Zero tire and wheel package. The convertible variant is AM’s fastest drop-top to date. 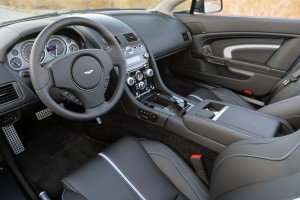 Is a V12 still too big for your liking? Perhaps you can dial it down a bit and seat yourself in a V8 Vantage GT with Aston Martin’s 6-speed manual transmission which offers the fun and excitement of a British pony car. The mechanical feel and short and strong gear throws truly made this a joy to dart around the Valley in. Its exhaust is audacious for a V8 and Aston still offers getty-up with 430-horsepower and a 190 mph top speed. Our Green/Yellow painted Vantage GT was rather daring, yet energetic. Its yellow brake calipers and matching grille ring presented the vehicle with visual excitement in addition to its dynamic driving characteristics. The downside to the Vantage is that the cabin is a bit small for bigger drivers like myself. At 6’ and 205 lbs., I could not find a comfort zone.

My Westlake Village experience was as visceral as it could possibly get and allowed me to see through the spectrum of an Aston Martin proprietor. Their performance parameters are impeccable and the fortitude of their personas timeless, spearheading the British automaker to continuously highlight the technologies and designs needed to inspire greatness.