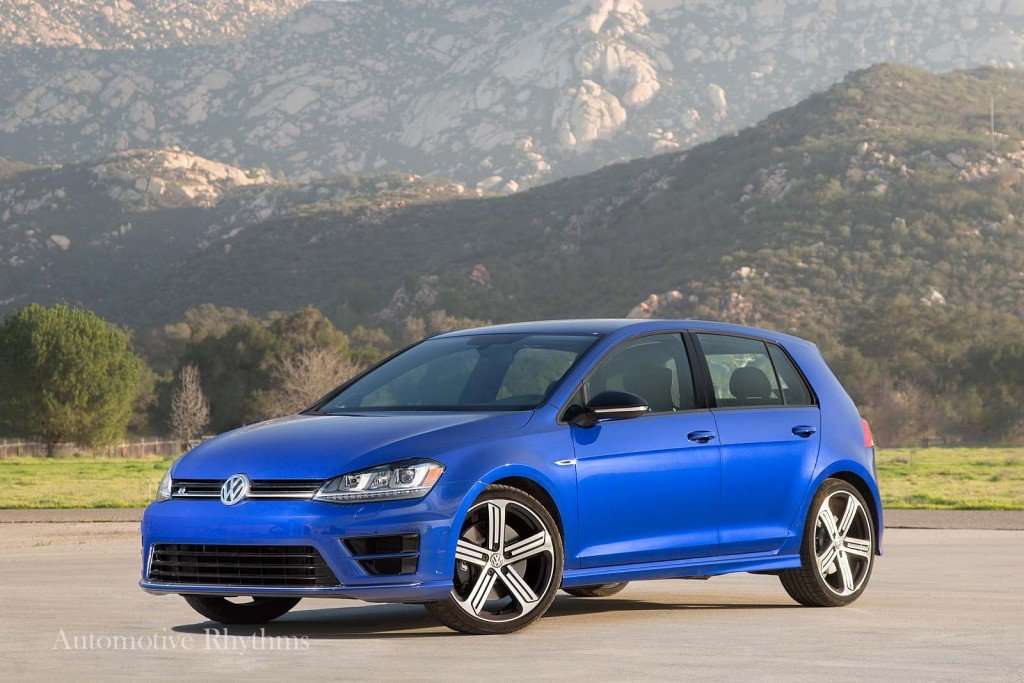 Automotive Rhythms arrived to the energetic vibe of San Diego, California for the 2015 Volkswagen (VW) Golf R media drive this past week with great anticipation. Given that the sportier and hipper edition of the recently crowned 2015 Car of the Year was launched on the West Coast, the redefined Golf R challenging the twists and turns of the popular region was an electrifying experience.

Based off the 7th generation Golf, which provided great insight into the upgrades the R would bring — such as its muscular stance — the hatchback is strong, bold and exudes confidence. VW utilized its experience in the World Rally Championship series to enhance the Golf R with the needed components for a successful performance package. Beginning with its profile, the R’s suspension has been lowered by .8 inches, adds quad exhaust tips, has a slightly extended rear and shares the same MQB platform as the Golf and Golf GTI. Impressive Bi-Xenon headlights with dual U-shaped LED DRLs continue to augment style and appeal to the German brand and literally shines light amongst their newfangled generation of sport editions. 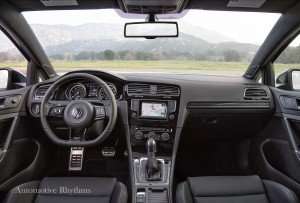 But what would vivid design changes and renovations be without respective alterations under the hood? The increase of 36-horsepower and 37 lb.-ft. of torque over the previous generation offers more roar when the pedal hits the floor. Its power packed and turbocharged 2-liter, 4-cylinder TSI engine with direct-injection never hesitated in the delivery of increased acceleration out of tight turns or approaching highway ramps. I was amazed at its cornering acceleration capabilities and all-out speed on open straightaways. With a total of 292-horsepower and 280 lb.-ft. of torque from 1,800 rpms, all-wheel-drive (AWD) and the availability of a DSG transmission (at launch), the 2015 Golf R is the fastest consumer VW in the company’s history. It runs from standstill to 60 mph in just 4.9 seconds (DSG equipped). Specifically, the DSG is a dual-clutch automatic with steering wheel mounted paddle shifters and features launch control to allow your rabbit to jump out the gate far faster than the hounds in pursuit. A 6-speed manual will be added to the 2016 model year. But not only is the Golf R’s throttle happy, it knows how to conserve fuel with 23 mpg/city and 30 mpg/highway.

Handling is improved by way of the hatchback’s 4MOTION AWD with the technologically enhanced 5th generation Haldex coupling and the DCC adaptive damping system, a feature that significantly elevates the Golf R’s handling attributes. DCC adjusts each of the four wheels independently based on their road characteristics allowing optimal traction in almost all conditions and at any speeds. While many in this field establish the Golf R as strictly a rally car, the sporty hatch proves that it is moving in the direction of overall appeal to a broader audience. DCC selections consist of Normal, Race and slightly customizable Individual modes as part of the Driving Mode Selection. Race mode as you can imagine signifies high-speed performance and stiffens the dampers further, shortens shift times and alters engine behavior to respond to performance effectively. In a Golf, it’s always simple maneuvering around town, finding parking and loading items in the cargo area. Now imagine doing the same but you have less time to complete each task. The extra ponies and safety features certainly come in handy as I found out in California.

The Golf R’s revised 4MOTION AWD as stated uses the latest Haldex system which spearheaded the major improvements in the vehicle’s responsiveness. Haldex as you know is globally recognized for advancements and innovative solutions that progress safety, dynamics and sustainability in consumer vehicles. Their AWD platforms are used in major brands such as Volvo and Volkswagen’s sister company Audi. Handling felt so precise because 4MOTION thinks before you can even blink. It actually monitors road mannerisms and anticipates when traction could be loss, engages itself and thus prevents as much wheel spin as possible. Moreover, it saves fuel by running only the front wheels when 4-wheel traction is not required. Supported on either Cadiz 18” or the upgraded 19’’ Cadiz aluminum-alloys tucked in performance rubber, the R feels perfectly at home on tracks or public roads. It’s the greatest asset of having a dual-themed vehicle. Also added, in conjunction with the included 13.4” front and 12.2” rear brakes, is the new Automatic Post-Collision Braking system which applies the brakes to stop secondary impacts in a collision. Thankfully, this is one feature I personally enjoyed not testing! 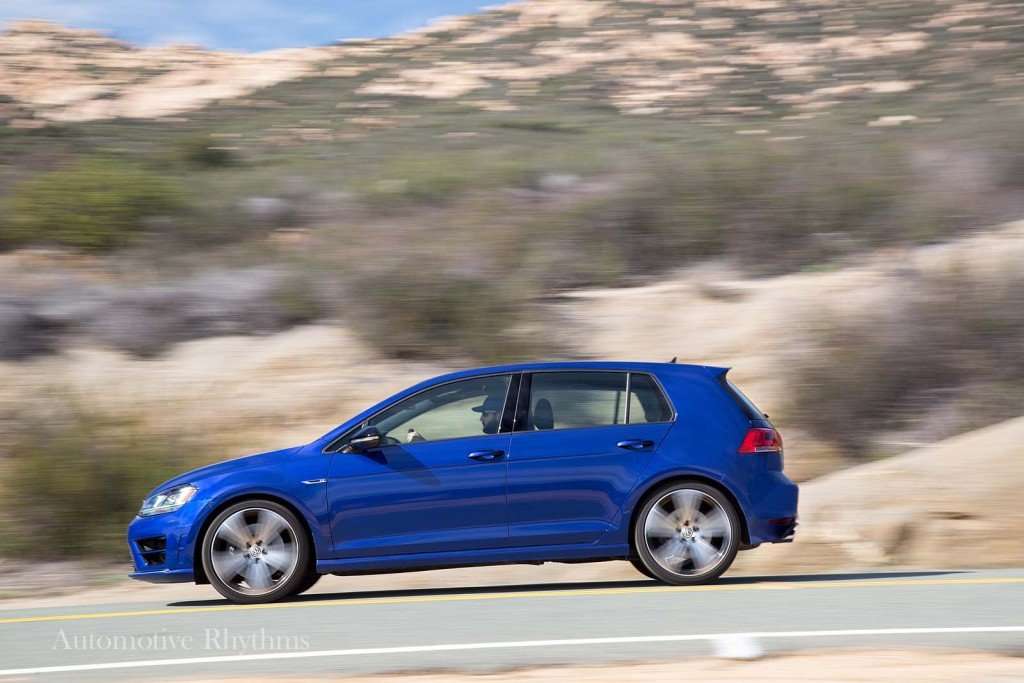 With the power, handling and excitement that the Golf R will bring to eventual owners, internal intelligence simultaneously increases optimism to the owner experience. The cabin is larger, the vehicle is lighter, a sleek blue instrument gauge (unique to this R) energizes the cabin, heated front seats, a power driver’s seat, leather throughout the cabin and automatic climate control are just a few interior niceties. The racing oriented, flat bottom, leather wrapped steering wheel provides most of the needed functionally directly while the navigation offers parking assistance by way of front and rear Park Distance Control. Through the infotainment and Fender premium audio sound system, syncing mobile devices will deliver home-like entertainment from your streaming audio. Although some of the responsiveness was a bit slow.

Excluding the $895 destination charge, the Golf R starts at $36,595 and increases to $39,090 for the Golf R with DCC & Navigation, which also adds the 19” aluminum-alloy rims, DCC of course, Fender tunes, a touchscreen navigation system and Park Distance Control. Currently it battles directly with the Subaru WRX STI and bears secondary competition from the BMW M235i and Mercedes-Benz CLA45 AMG. Five distinctive hues are available for your bunny of choice, or should I say jackrabbit. But make sure to put an order in soon before the Golf Rs bounce out of site.

A Preview of the 2022 Range Rover: New Levels of Emotional Engagement

GMC Introduces Its Most Luxurious, Advanced and Capable Sierra 1500 Lineup