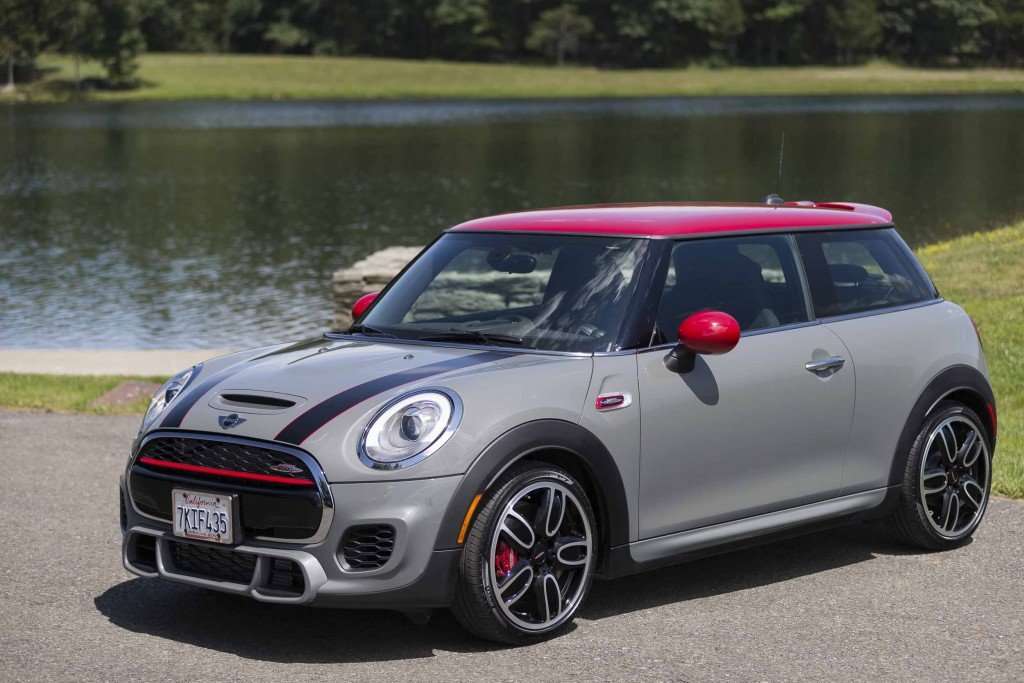 Not to long ago I ventured to New Haven, Connecticut of all places to explore the freshest offering from BMW’s MINI brand, otherwise known as the new John Cooper Works (JCW) Hardtop model. It’s spunky, courageous, zippy, and of course laden with the latest technologies expected from the small car’s loyal following. Upon first glance this compact, intelligent, yet playful ride seduces you with its allure and distinct, boisterous, fish mouth grille and vibrant, multihued styles. As they say, first impressions can either make you or break you. So I do believe we have a “made” winner here.

Although petite, MINI cars are daring with outgoing personas. For that reason alone I considered them Big Men On Campus since we settled in at the Study Hotel on the campus of Yale University. On day one our group of media were delightfully greeted and escorted to the Yale School of Management building for a presentation by Professor of Sociology Jeffrey Alexander on the significance and history of icons and how they were introduced into society. He eloquently continued on the affect of cars on human senses including the MINI brand. Automotive Rhythms can certainly attest to the appeal of the small car manufacturer after covering MINI United in the UK a few years back. With the copious number of patrons in attendance it felt like a national fútbol match opposed to a car show. And I can’t forget about our publisher Kimatni Rawlins’ Jamaican uncle Chokey Taylor and roots reggae singer who owns both a classic Cooper and a 2012 model which he uses to race on the island circuit. 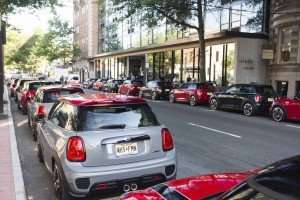 Continuously delivering models that dazzle with appearances such as contrasting roofs and mirrors (Chili Red on Moonwalk Gray Metallic for example), racing stripes, highlighted rims, and inspirational interiors with fierce cross-stitching, mood lighting, and premium seating materials, MINI vehicles are endowed with enough gadgetry, trims and accessories to differentiate your ride from the next. The main vehicle I drove was a $41,800 JWC Rebel Green ($1,000) with a Carbon Black Dinamica/Leather interior ($1,950), the Cold Weather Package ($650), the Premium Package ($1,800), and the $1,750 Wired Package. The flip switch for the ignition starter is a novelty with further uniqueness from the rings representing the gauges and center infotainment center. Stainless and aluminum trim increases authenticity while the optional MINI Head-Up Display included with the $850 Wired Upgrade (also comprises the rear view camera) increases sports performance parameters to your ride. Though the cabin is certainly spacious, at 6’3” I would definitely need time to adjust to everyday driving since I’m used to larger vehicles. Surprisingly, the front seats provided enough legroom for long rides without feeling cramped. However, the backseat passenger’s flexibility options when I’m behind the wheel would be minimal.

Of course a John Cooper Works model wouldn’t be itself without a profuse amount of performance dominance. Boy was I impressed with the power to weight ratio of the little guy! MINI outfitted the JCW with a 2-liter Direct Injected 4-cylinder engine with MINI TwinPower Turbo Technology. The revised piston designs, lower compression, and higher turbo boost (new turbocharger) instilled the JCW with 228 horsepower (increase of 20-horsepower from previous model) and 236 ft.-lbs. of torque which is available from a mere 1,250 rpms. Large intakes on the lower front fascia provides air for the powerful engine while the optional 18” Cup Spoke Two-Tone spins, Performance Control, and Dynamic Damper Control enhanced the platform thoroughly for the New Haven streets and trekking the highways of upstate Connecticut and New York. The feature that would impress the most on these switchbacks would be the larger and ventilated Brembo brakes. These, along with standard Corner Braking Control (CBC) and Electronic Brakeforce Distribution (EBD) increased my driving confidence since they help the vehicle corner evenly without the extreme worry of veering to far off in a turn. These systems were put to the test during a hot lap with Luis Perocarpi, the principal of the MINI Race team. Either a 6-speed manual or optional 6-speed Steptronic sports automatic transmission with paddle shifters are paired to the JWC. As well, MINI Driving Modes allows drivers to customize the vehicle’s mannerisms with either the standard MID Mode, the SPORT Mode, or the GREEN Mode for fuel efficiency. 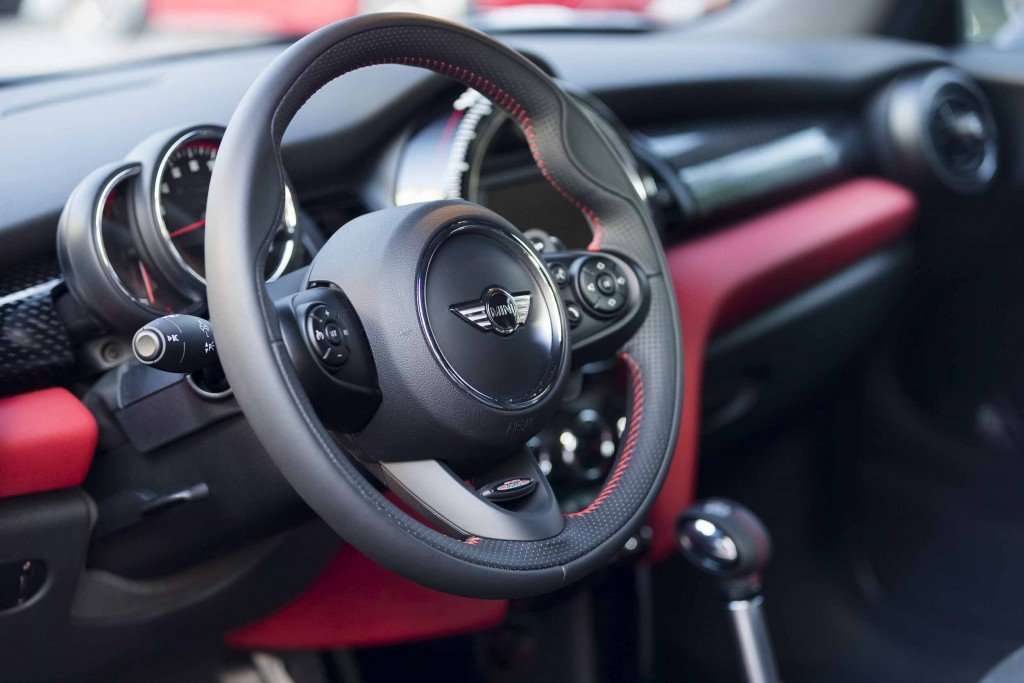 One of the only drawbacks would be the extremely limited space for storing anything bigger than a small bag and briefcase. With 10 hues to select between for your JWC, the unique rear spoiler stands out and provides a 30% decrease in rear lift and centered, dual chrome exhaust outlets have larger diameters. Back inside the JWC, its MINI Connected multi-media system in conjunction with intelligent navigation provides owners with advanced telematics, infotainment, and an array of Apps such as Google Send to Car. 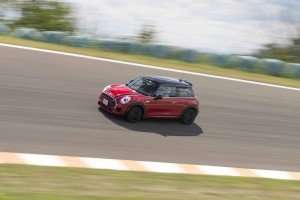 The adventurous journey to the personal track of Alan Wilzig ultimately led to testing the performance improvements of the JCW. At the Wilzig Racing Manor the MINI felt light on its feet and displayed agile handling that pushed the vehicle smoothly through the corners. Its manual shifted swiftly during acceleration and braking cycles and exhibited phenomenal corner braking.

With the standard pricing for the JCW Hardtop starting at $30,600, which is only an additional $500 over the 2013 JCW, optional packages can include the $1,800 Premium Package with the harmon/kardon premium sound system, Panoramic roof, Comfort Access Keyless entry, and storage package. Or you may opt for the $650 Cold Weather Package with heated front seats and power-folding mirrors or possibly the $1,750 Wired Package. Either or, you will be endowed with the tools required to Motor Hard in your new John Cooper Works Hardtop!