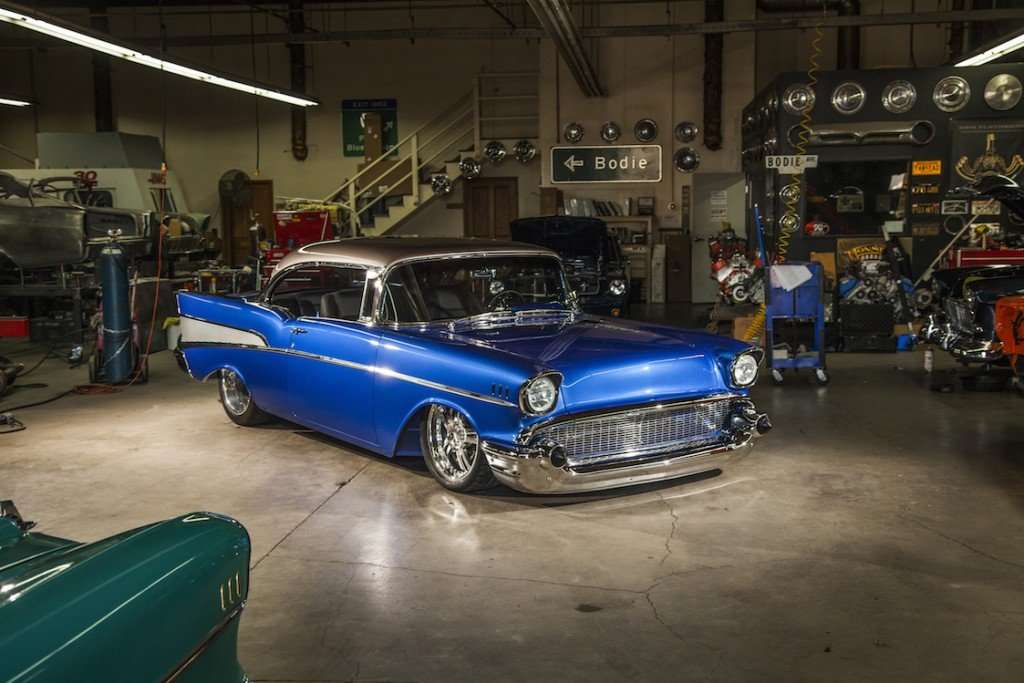 Bodie Stroud’s success story is quintessentially American. He worked for the same company for 15 years, starting out as a heavy diesel mechanic and working his way up the ladder until he decided it was time to pursue his dream of owning a own hot rod shop and founded Bodie Stroud Industries. Starting out in a small two-man shop in North Hollywood, California in 2007, he has since built a name for himself as one of the most skilled custom car builders in the world. Using his unique ability to work on both the aesthetics and mechanics of a vehicle, he has created some of the custom car world’s most talked about vehicles including the now legendary 1960 Starliner “Scarliner” and actor/comedian Tim Allen’s exquisite 427 “COPO” Camaro.

One vehicle that has always loomed large for Bodie has been the 1957 Chevrolet Bel Air, his father owned one when he was a child and Bodie was immediately enamored with all the chrome and the big metal turquoise dash on the ‘57. However, it wasn’t until Bodie’s childhood friend James Cole came to him that he had the chance to work his unique style on one.

Cole had previously owned and restored a 1956 Bel Air which he sold to start his business and support his family. Once his business was successful, he decided it was time to finally realize his dream of owning a 1957 Bel Air. Once a vehicle was sourced, James turned Bodie loose with only two requirements: it must have a big block engine and the car must match his wife’s “Blue My Mind” nail polish. With nearly limitless possibilities, Mr. Stroud set to work. 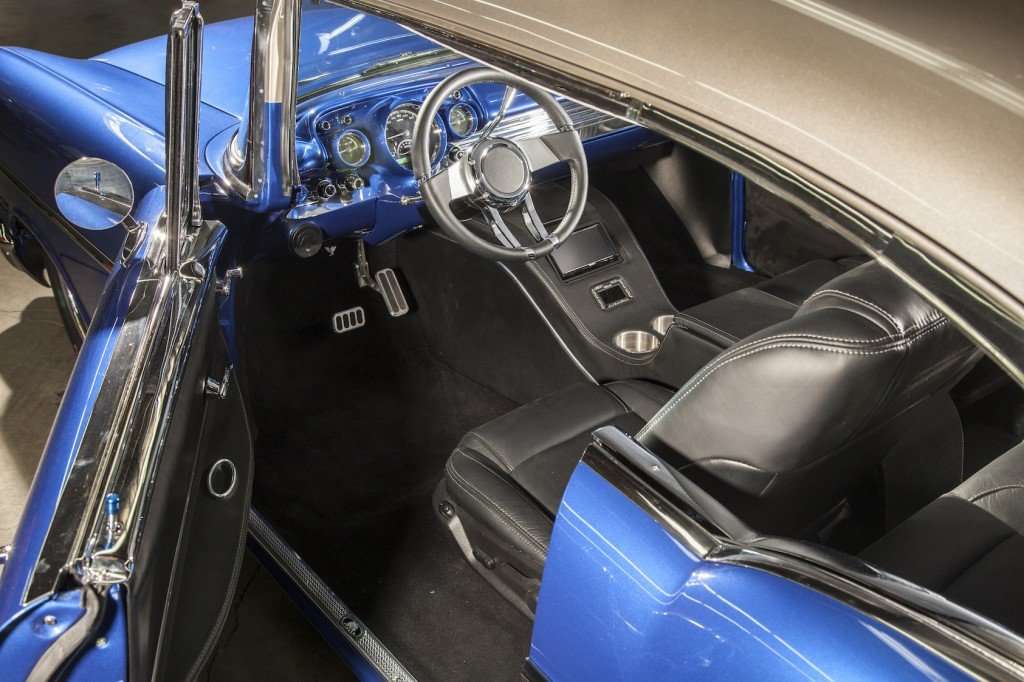 Bodie began by modifying the stock chassis to work with a custom four-link rear suspension and his newly designed bolt-on Tri-Five front suspension, both of which utilize Bodie’s ingenious (and patented) EZ-Aline system which makes alignment changes extremely simple, even with the wheels in place. Quality damping and easy ride height adjustment are provided by RideTech coil-overs. All of this amounts to an incredibly modern suspension that should be able to be tweaked to suit nearly any driving style. Bodie decided to go with a relatively conservative (relative to his past builds anyway) wheel and tire package with BF Goodrich G-Force tires mounted to Rushforth 19 x 8.5 inch wheels on the front and 20 x 12 inch Rushforth rear wheels clad in Mickey Thompson Sportsman tires. Ample stopping power is provided by top of the line six-piston Wilwood calipers and 13-inch rotors at all four corners.

As per Mr. Cole’s design brief, the Bel Air is powered by a massive Chevy 509 cubic inch big block engine from QMP Racing out of Chatsworth, California. Fuel injection is handled by a Kinsler Dragon Claw EFI system which brings modern power, control, and economy to the build while still retaining a super slick vintage look. Fuel is delivered by an Aeromotive A1000 pump which is controlled by a Fast XFI electronic fuel management. Exhaust duties are handled by custom headers and a custom three-inch stainless steel setup from MagnaFlow. 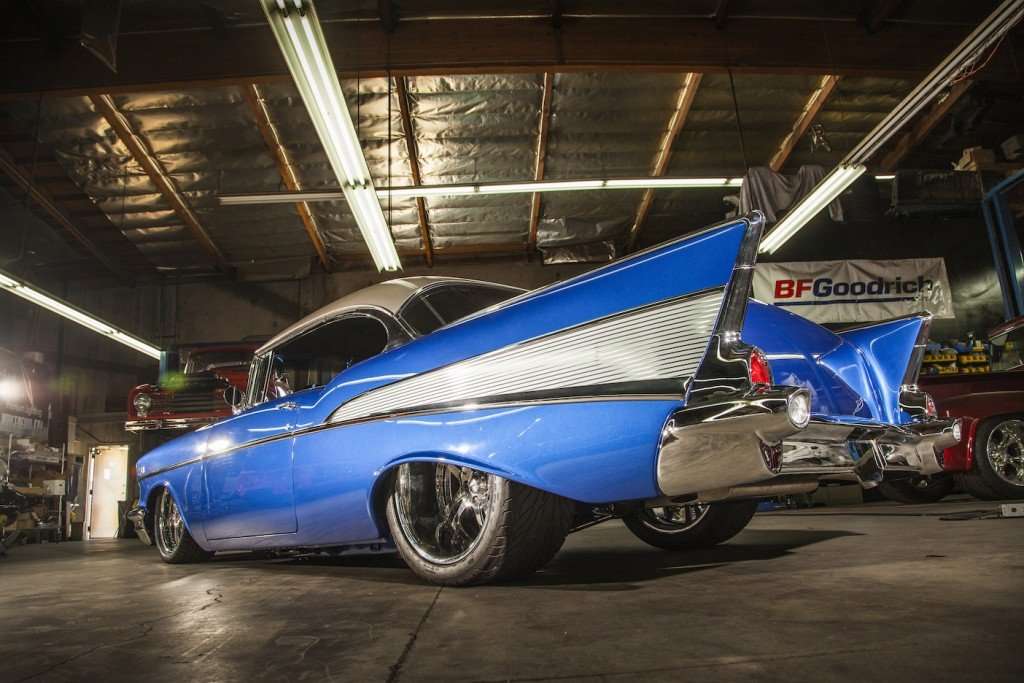 With an engine of this size and power, some serious cooling is needed and that is handled by a Matson’s radiator and dual 14-inch electric fans from SPAL. What do all these lust-worthy parts get you when all is said and done? How about a staggering 800 horsepower ran on 91 octane pump gas. Clearly, no ordinary transmission and rear end combination would hold up to the abuse that the big block will be dishing out, so power is routed through a 4L80E transmission that has been beefed up by the transmission gurus at TCI, a custom three-inch aluminum Inland Empire driveshaft, and a Strange-built Ford nine-inch rear end.

All of that power is going to create quite a bit of heat under the hood as well as inside the cabin. To manage the internal temperature, Bodie Stroud looked to the A/C experts at Vintage Air to help the vehicle’s occupants stay cool. The modern seats and interior have been upholstered in fine black leather with contrasting silver stitching from Corona Concepts. The billet steering wheel and column are both from Flaming River and the modern instruments come courtesy of Dakota Digital. The custom center console houses a Kenwood seven-inch touch screen double-DIN head unit and mini iPod docking station which drive Power Bass speakers, a combination which is sure to make itself heard, even above the thunderous roar of that big block power plant.

After the thousands of hours of work and six months the vehicle was completed in, the iconic 1957 Chevy Bel Air was finalized by being given a name worthy of its monstrous engine and sizable presence: “GMonster.” 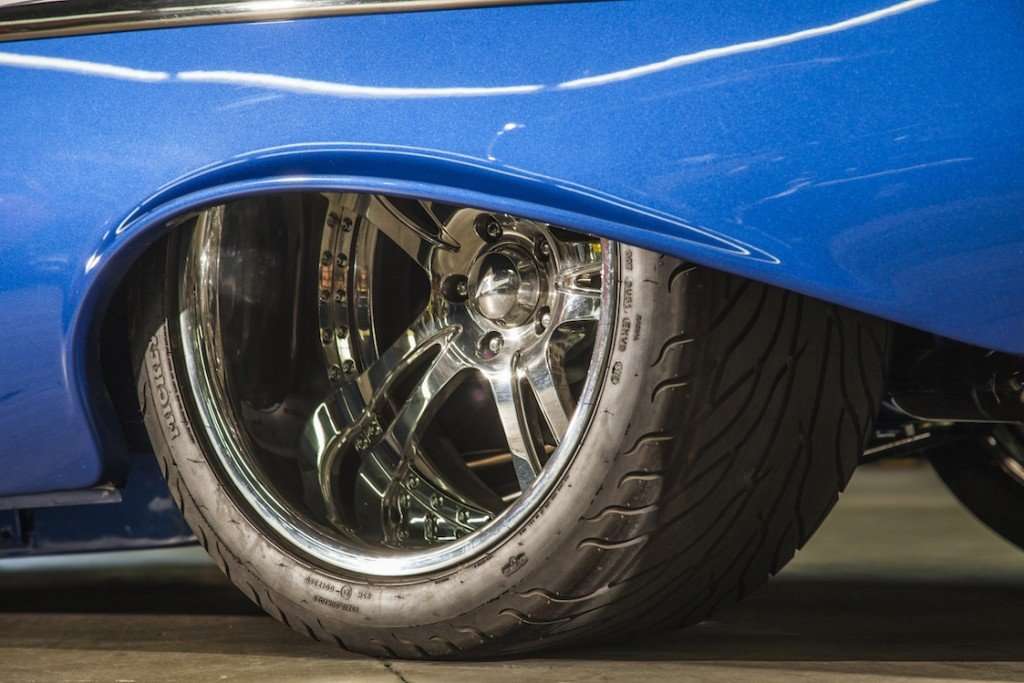 With a vehicle as recognizable as the Tri-Five Chevrolet, it’s tough to do something new, to really step outside the box and challenge preconceived notions as to what is and what is not acceptable, and to really make people pay attention. The ’57 Bel Air is the car that we’ve all seen a million times, and it has in some way been a part of our lives. It’s almost ubiquitous throughout the classic car world. This familiarity can be both a blessing and a curse for a builder.

Bodie Stroud has managed to do something that most people would have thought impossible – he’s taken something very iconic and has reengineered it to make it modern and new, while retaining that familiarity of the Bel Air. It takes someone with just the right skill set and perfect timing to do what he’s managed to do with the GMonster. Everything, from the gigantic engine, to the ingenious suspension, to the updated, but still classic interior speaks to his abilities as both a designer and a builder. What is even more impressive is that with his Tri-Five suspension, he’s made it repeatable and anyone with a Tri-Five can make it handle with bolt-on parts; that’s quite a contribution to the automotive community.

Bodie has a truly unique way of looking at a car. He has an extremely successful track record of building cars that are at once crazy in the sheer scope of their modification and yet familiar, still recognizable as the cars on which they’re based. This is why the world tends to pay attention when Mr. Stroud opens the door to his shop and rolls something out.