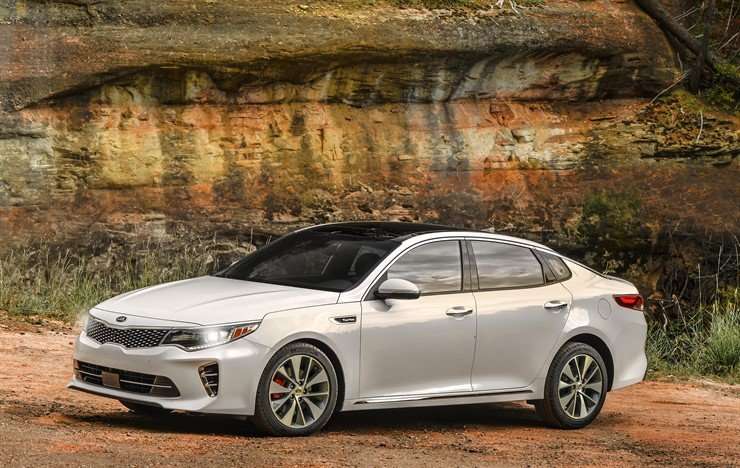 It’s autumn in Aspen, Colorado and the landscape is as idyllic as a Rembrandt painting of the inquisitive sea. Singing trees have shown their true colors as peaceful winds bring rhythm to the nature of Colorado’s energetic flow. A special place indeed with its colorful history, incredible roads and magnetic scenery, Kia was left with minimal location choices for the launch of their all-new 2016 Optima sports sedan. Already a highlight reel of itself, the old Optima has been invigorated with bigger proportions, stronger and more efficient engines and one of the better premium audio systems in the business thanks to harman / kardon by HAMAN.

If you haven’t noticed by now Kia is riding a title wave of success since 2001 when they were at the bottom of the J.D. Power Study in Initial Quality. After 14 hard-earned years Kia is now ranked second behind German sports car brand Porsche in the J.D. Power 2015 U.S. Initial Quality Study. Both the 2015 Kia Soul and the 2015 Sorento have received top awards in overall quality. Pretty impressive don’t you think?

As you can see the Korean automaker is continually challenging automotive convention with their innovations, styles and knack for technological breakthroughs while doing so with value pricing. As the 8th largest auto brand in the U.S. by volume, sales are currently up with 40% of the lion’s share emanating from Optima and Sorento. We can probably thank the LA Clipper’s superstar Blake Griffin for his commercial scripts, alter egos and death-defying dunks for the increased awareness of the Optima moniker over the last several years. Keep your eyes peeled for his hilarious “In the Zone” ad campaign! 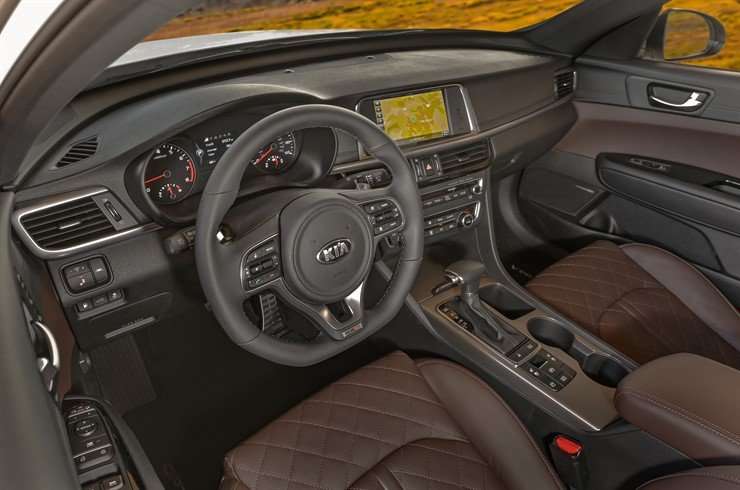 “The Optima changed the way people felt about the Kia brand, and Kia owes much of its growth and success in this country to the car’s head-turning design and sporty performance. The all-new Optima encompasses everything the outgoing model did so well but does it even better. It has matured in all the right ways, from the European sport-sedan design to the premium materials to its improved ride and handling,” said Orth Hedrick, vice president, product planning KMA.

Introduced at the NY Auto Show in 2010 the Optima is Kia’s best seller for last three years and has enjoyed increased sales ever since. It’s anything but ordinary in the eyes of the Koreans. A three-day trip and stay at the Viceroy Snowmass Hotel and Resort in Aspen, Colorado would soon reveal all of the vehicle’s latest attributes. In fact, the persona of the fully loaded White Optima conveniently displayed at the cornerstone of the Viceroy was primly correlated with the luxuriant mountain theme and needs of vacationing guests.

With three engines and five trim levels starting at $21,840 (same price as outgoing model) to decide between, the Optima becomes a situational vehicle for the various driver types in the market place. They consist of the LX, LX 1.6T, EX, SX and SXL, with the LX representing the most popular Optima. Power and performance resonates from carryover engines including the 2.4-liter GDI 4-cylinder (185 horsepower / 178 lb.-ft of torque) found on the LX and EX or the 2-liter GDI turbo engine (245 horsepower / 260 lb.-ft. of torque) that gives life to the SXL and SX models. Both are paired with Kia’s shifty 6-speed automatic transmission with Sportmatic. A new and third engine is the 1.6-liter turbocharged 4-cylinder with 178-horsepower and 195 lb.-ft. of torque. It gets down with a progressive 7-speed Dual Clutch Transmission (DCT). Not bad for a non-German auto! Trekking up to 12,000 feet of elevation on mountain roads the 2-liter turbo felt comfortable without any lag from the thinning of air. In addition steering was positive and on center. Not to mention the leather-wrapped, heated steering wheel itself was thick, bold and multi-functional. With thumb indentions, race-inspired flat bottom and paddle shifters, steering on my SXL model was prepared for the curvature of the snaky Aspen roads. Depending on your mood or road conditions the Driver Mode Select (DMS) lets you customize the type of ride you wish to enjoy between Normal, Sport and Eco modes. Overall, the Optima has been massively improved in every area of dynamics. 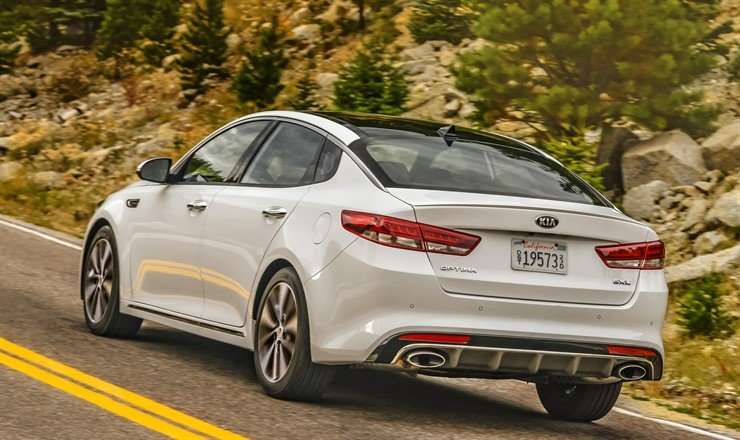 Aesthetically, the Optima was already a beautifully chiseled vehicle. It looked dynamic even when sitting still. Yet, Kia endeavored for more to clamor such as increased dimensions and intriguing touches like the Satin metal finishes on the grille. Attractive features include alloy rims (16” to 18”), dual exhaust tips embedded in the lower body rear diffuser, menacing front fascia and chin spoiler, a panoramic sunroof and new, wrap-around Bi-Xenon HID headlights and LED taillights. Around town during typical errand runs the Optima was fine maneuvering, parking and getting through simple traffic. For safety and added performance the rigidity of the Optima’s high-tensile strength steel frame and chassis have been increased considerably.

Step inside and the mass appeal continues. Redesigned front seats, precision stitching, Nappa leathers (rich Merlot and Dark Aubergine) and UVO with either Android Auto and Apple CarPlay raise the stakes. The seats in particular are comfortable, dynamic and offer the option of heating and cooling. UVO, Kia’s infotainment center, is upgraded with new capabilities including Geo-fencing, Speed Alert, Curfew Alert and Driving Score. The 8” touchscreen is simple to operate whether its navigation or music selections. And with Apple CarPlay UVO basically turns itself into an iPhone as it replicates your top featured apps. For the extended drive Bob Marley never sounded better as I rocked station 42 The Joint from the aforementioned harman / kardon premium audio system. With 10 speakers and 630 watts, it uses Clari-Fi to restore audio signals from music compression and QuantumLogic Surround to replace original recording inputs.

Welcome to a brave new world for Kia. They take on positions that most brands are afraid of, and do so with consistency and excitement. Yet, they still keep you safe and sound with advanced technologies such as Blind Spot Detection System, Front Collision Warning System, Rear Cross Traffic Alert, Lane Departure Warning System, Surround View Monitor and Autonomous Emergency Braking which can bring the Optima to a halt if need be. With all this, I must be In the Zone!