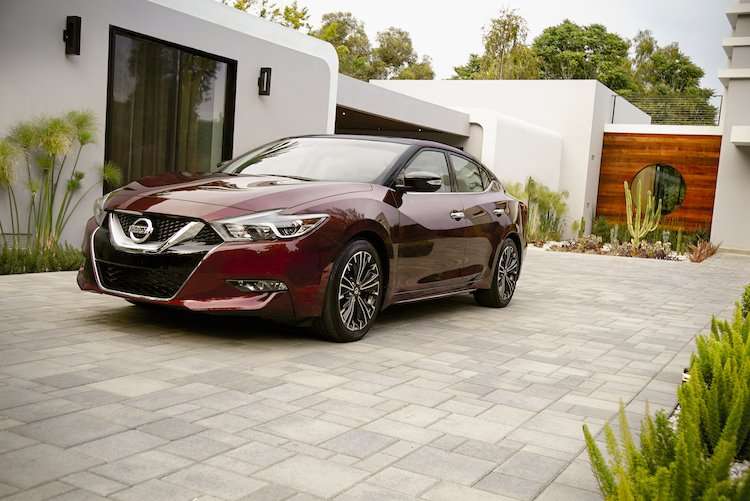 The Max is back with more energy and flavor than ever before. And for the first time since I was scouting used Maximas in 1993, I can emphatically say Nissan’s sports sedan has returned to my radar. In between then and now the Japanese vehicle has been an afterthought that rarely made it into our conversations. Previously, Automotive Rhythms had been receiving requests for performance and technology info on the Hyundai Genesis, Kia Optima and Dodge Charger with limited mentions of the Maxima. Well, look ahead because times have changed considerably for the 8th generation Maxima.

“Design is communicating emotion from designer to customer,” stated Shiro Nakamura, Nissan SVP of Design. I agree wholeheartedly with Shiro as the 2016 Nissan Maxima is furious, explosive and artificially intelligent. At times I felt like I was in their higher end sister brand Infiniti. Built stateside in Smyrna, TN, the silhouette of the four-door sports car features chiseled cut lines like that of the GT-R and a sloping rear quarter reminiscence of the Jaguar XJ. As the longest running nameplate for Nissan, designers knew this latest iteration had to be a game changer. So they began the process by steering towards the Blue Angels fighter jets for design inspiration. Multiple visits and research at the Naval Air Station in Pensacola, Florida manifested the blueprint of the design including the cockpit for example. Diamond Cut 19” rims sit on a lower, longer and lighter body which is capped off with a floating roof, blacked A and B pillars, a dual split, fish mouth grille and razor sharp head and tail lamps. 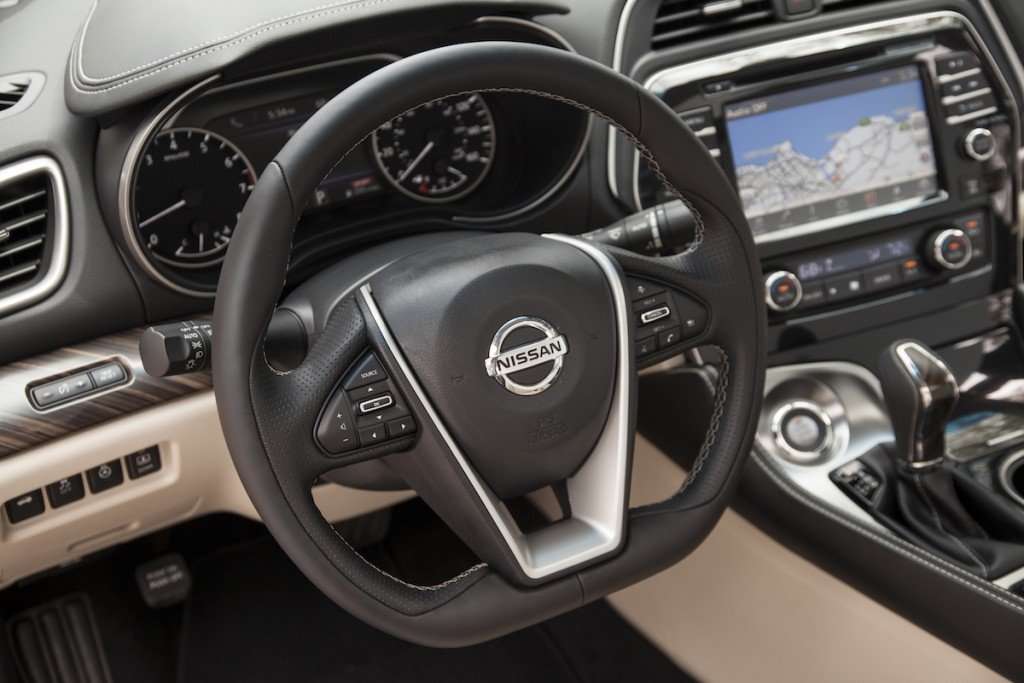 To experience the Maxima first hand we headed to Nashville, TN for a day of excitement with the tech-laden vehicle. My first appreciation was becoming familiar with the mechanics of the vehicle. Nissan likes CVT performance since they feel it offers the best combo of fuel economy and response. Yet, they still have not adopted AWD which is a must for those living in four season regions. Of course you can do fine without, but your vehicle will excel with it. Especially when snowfall hits and you slap on winter tires. Everything on this ride was challenged including the engine with 61% new parts, the transmission and the chassis. The new Maxima is now 25% more rigid, the transmission’s D-Step and Active Shift Control improves shifts, a new suspension has been installed and incorporates Intelligent Dynamics-control Module (IDM) and Active Ride Control on the SR trim, and Sport mode (alters RPM response, stiffens steering and activates Active Sound Enhancement and IDM) is featured on all models; all of which gains 14% better fuel economy with supplementary energetic flow for the Nissan. Not to be forgotten, the 300 horsepower 3.5-liter V6 with the Xtronic CVT moves rapidly when acceleration is needed.

Place yourself behind the multi-functional racing wheel of the Maxima and begin to feel like the pilot of a Fighter Jet. The entire wrap-around cockpit is aeronautical inspired which injects endorphins into every drive. Seriously, I mistakenly asked the engineer if Nissan borrowed the GT-R steering wheel and he jokingly laughed and said no. The thick, flat bottom wheel is infused with switches to control the vehicle’s digital technology and displays, long paddle shifters (SR model only) and thumb imprints for performance oriented steering. I did find the steering a bit stiff even without deploying Sport mode. Around town maneuvering should be relaxing. The driver-centric cabin uses a start button on the center console and hosts 15 inches of graphic screen space including the 8” standard Navigation unit which is touch actuated, but can also operate from the central Display Commander. Designers reduced the number of controls from 25 to 10 for ergonomic purposes. The technology is perfectly balanced with opulence by way of Diamond quilted leathers or Alcantara, cross-stitching and liquid chrome faceted finishers (wood grain is also an option). 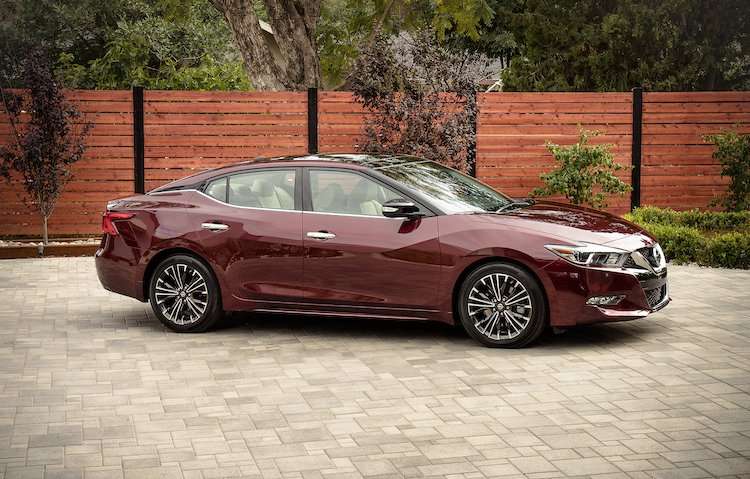 While cruising around the Southern roads of TN I tuned into Bob Marley to satisfy my soul by way of the Bose 11-speaker surround sound audio. The system emits powerful energy but with clarity. Additional algorithms built into its characteristics include Active Noise Cancellation. Rather than inserting mechanical solutions that may have added weight to the vehicle, Bose decided to cancel unwanted sound with sound. Yet, since Nissan’s Sport button has another specific role to bring engine notes into the cabin, Bose was instructed to boost certain tones so the two would synchronize instead of contrast each other’s roles. In addition to Bose’s audio stratagems, Acoustic Laminated Glass in the windshield and front windows was placed to minimize cabin din by engrossing engine and road noise. 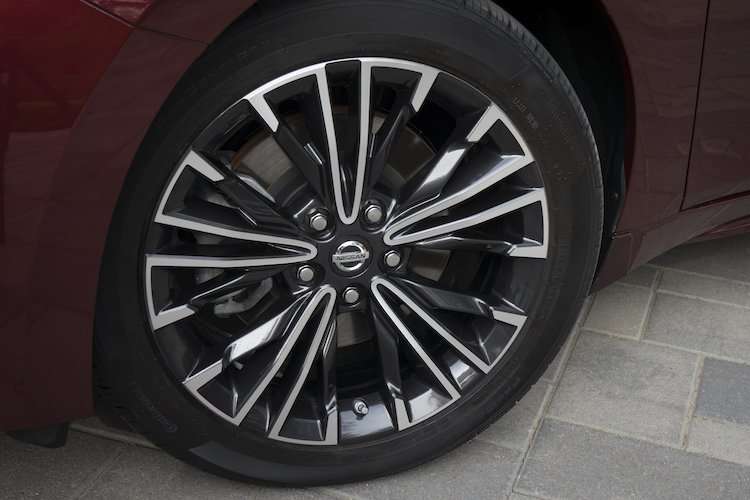 Additional, innovative technology comes in the form of Driver Attention Alert for drowsy drivers, which is related to 1 in 5 vehicular fatalities. Predictive Forward Collision Warning notifies the driver what the next two cars ahead are doing in case emergency braking is needed. Blind Spot Warning is nothing new but was on point as a car flew by us right before we were about to change lanes. NissanConnect is the future for safety, security and convenience. The remote connectivity between the app on your smartphone and your vehicle allows for automated controls, warnings and alerts. For example, you can set speed limit or boundary address alerts so your teen driver begins to respect your wishes. Owners can also lock and unlock doors, turn on the lights, honk the horn or turn on the vehicle.

With five various models to choose from including the $32,410 S, the $34,390 SV, the $36,890 SL, the $37,670, SR and the 39,860 Platinum — expect an $840 on average price increase over the outgoing Maxima models. The Gun Metallic Maxima Platinum I spent most of my day with had only the $825 destination charge as an additional fee. Now I am expecting much more conversation sparked since the Max is back.