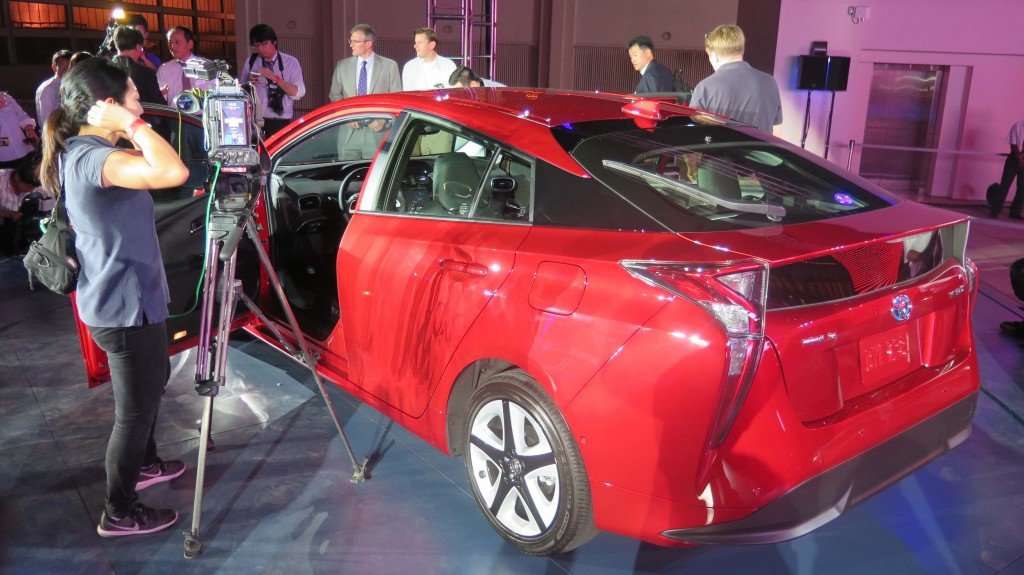 Not everything in Las Vegas is a must-keep secret, especially when it comes to the auto industry and the need to prophesize their latest innovations, infectious designs, and energy saving technologies. More importantly, when the topic of discussion is related to electric cars, hybrids, and sustainability of the planet, then volume of the news cycle must be intensified. Decidedly so, Toyota left no stones unturned in the anticipated reveal of the all-new 2016 Prius, which already holds a 23% stake in its respective category. 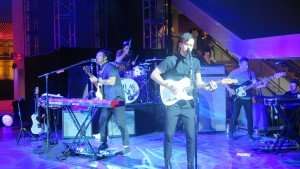 Held at Sin City’s entertaining Vortex complex located at the LINQ Hotel & Casino, the evening launch party was replete with the melodious sounds of alternative rock band Atlas Genius; gourmet food stations for the guest list of 350 media members, dealers, and Prius influencers; fancy Toyota branded gobos to decorate the walls and neighboring buildings; enough desserts to satisfy a gym full of kids; and the grand entrance of the Prius which slowly dropped from the sky like the ball on New Year’s Eve. Immediately after a short introduction of the vehicle everyone rushed the stage for photos and videos of the 0.6” wider, 0.8” lower, 2.4” longer, and bolder hybrid. Now in its fourth generation, the interior of the Prius offers more room stemming from the newfangled dimensions.

“Prius set the global benchmark for hybrids, but now is breaking its own boundaries with more engaging style and fun-to-drive dynamics,” said Bill Fay, group vice president and general manager, Toyota Division. “This Prius will invite new drivers into the category by delivering an impressive look and feel, built on the foundation of safety and eco-consciousness that define the vehicle’s heritage.”

Introduced worldwide in 2000, the Prius traditionally has provided outstanding fuel economy for its proud owners. Compared to 50 mpg for the 2015 model, Toyota says the 2016 model will see an average increase of 10% to about 55 mpg due to a lighter and more efficient hybrid system. Since sales are down from last year this just may be the play call to get loyalists back in the game. Especially since history has a way of repeating itself. Soon enough gas prices will rise again and hybrids and EVs will become the hot topic of discussion. Speaking of which, Toyota has sold 8 million global hybrids and 5 million Prius vehicles globally, of which 1.9 million Prius vehicles stem from U.S. sales.

Stylistically the little Prius appears to have adopted some of the edgy and aggressive design traits of the Lexus brand. Attraction comes from sharp and large vertical taillamps and an aggressive front fascia which is emphasized with LED headlamps and a glimmering Toyota logo outlined in Blue. The “Blue for energy” hue also shows up in the interior such as the stitching, ignition starter, and vents. Strong lines, a lowered rear spoiler, and two-toned Frisbee rims on the Hypersonic Red (seven exterior colors to choose from) body of the show model were a nice touch and give the Japanese ride additional character.

Inside, the cabin is reminiscent of something RSD2 would take enjoyment with. A large LCD screen featuring various Apps, a joystick drive unit, multi-functional steering wheel, a JBL audio system, and a centered but oddly placed digital information display are a few of the virtuous cabin elements. This particular model also came with the premium white ornamentation which Toyota says is similar to fine bone china. Safety technologies come in the form of Toyota Safety Sense, Pre-Collision System with Pedestrian Detection, Lane Departure Alert with Steering Assist, Full-Speed Dynamic Radar Cruise Control, and Automatic High Beams.

Engineering, mechanical, and battery details have not been released so stay tuned for more details. Thus far I like what I’m seeing. Expect the 2016 Toyota Prius on the streets early next year.