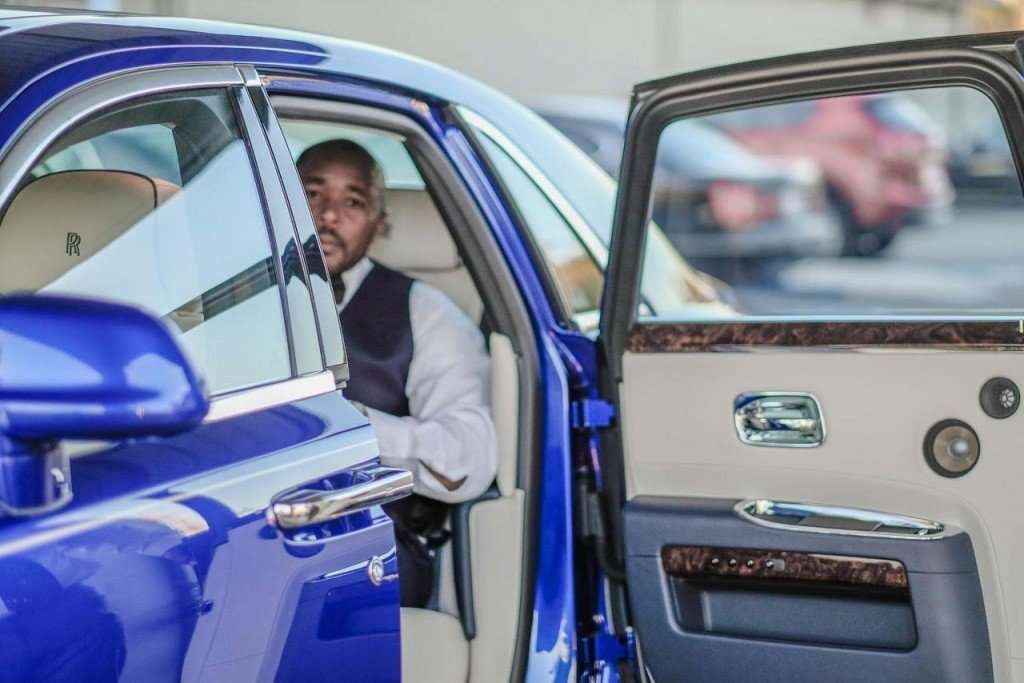 As the eternal saying goes, “it was a match made in heaven.” The union of Stephen and Jenn Redmond at the opulent Wedgewood Wedding & Banquet Center on the property of the San Ramon Golf Club in San Ramon, California was a most glorious and transformative day for mates and family of the exultant couple. The endearing moment in time reunited aged friendships and strengthened new relations. So, to enhance the unforgettable spectacle it was only proper for me to offer up a wonder indicative of the successful vocations of the couple. This common denominator, which amalgamated the wedding party and guests alike, is known as the Rolls-Royce Ghost.

Steve’s illustrious career as an educator is punctuated by decorations, honors and entitlements from the highest form. He has a cerebral understanding of how he would like to celebrate his hard work and marvels at some of the finer things in life. His Italian suits are tailor-made like the stitching on the handcrafted steering wheel of a Rolls-Royce for example. What he chooses to drive is symbiotic to how he lives, and that comes with a sense of appreciation for quality technologies that enhance the respect for innovation and comfort. For 25 years now Steve has always been a leader to the brotherhood and typically dictates the setting and level of entertainment for our assemblies. His wife Jenn is a tech software entrepreneur and enjoys life’s simplicities. Yet, both were equally enamored and appreciative of the $382,825 ($286,750 MSRP) Salamanca Blue Roll-Royce Ghost which sat front and center at all of their wedding activities. Unbeknownst to me when I scheduled the British Grand Tourer out of San Francisco was the fact that it also represented the hue of choice for the bridal party. In addition, Jenn was also ecstatic that the Ghost mirrored Cowboy Blue after her favorite sports team. 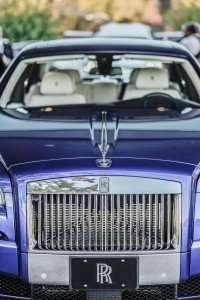 “Rolls-Royce Ghost has proven to be no ordinary power. It has been the cornerstone of our success around the world since its launch in 2009,” aptly stated Torsten Müller-Ötvös, Chief Executive Officer, Rolls-Royce Motor Cars. “It has propelled Rolls-Royce Motor Cars to new heights. In presenting a less formal, more contemporary and dynamic expression of Rolls-Royce luxury we have attracted a new generation of clients to Rolls-Royce – the Captains of Industry, entrepreneurs and successful business men and women who are the wealth and job creators in our economies.”

The Ghost felt right at home for both myself, and my friends of 25 years who now are music, fashion and real estate moguls. Roll-Royce manifested the Ghost for a younger generation of wealth proprietors who endeavor luxurious vehicles with style, taste and scintillating interiors which honor their home and workspace. Since I evaluate new vehicles for a living I did not mind escorting Steve, Jenn and some of the bridesmaids and groomsmen around during the vehicle’s short weekend stay. Its 6.6-liter aluminum-alloy V12 with 563-horsepower and 575 lb.-ft. of torque were a joy powering on the Bay roads and motorways. Vehicle hallmarks to point out that everyone marveled over included the retractable Spirit of Ecstasy figurine which sits atop the massive, vertical grille, the 21” light alloy rims with self-righting Roll-Royce logo center caps, door embedded umbrellas and Rear Coach Doors with power assistance. 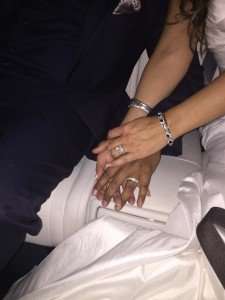 “I’m going to change your life” Mr. Redmond aptly stated to his new wife during the courting period. Now how special is that. A Ghost has similar affects on conscious thought. Such a vehicle – one with majestic traits and imperial nobility – can positively alter moods while producing elevated euphoria. Enter the stately Seashell / Navy Blue cabin of our Ghost to experience elation. The couple was treated to rear massaging chairs outlined with stitched piping, veneered table backs, lambs wool foot mats, picnic tables, a panoramic moonroof and much more. In route to the Chapel I played Steve’s favorite recordings through the 16-speaker and 600-watt Premium Audio System to set the mood and relieve any marital butterflies. The 10.2” high-definition screen and Spirit of Ecstasy Rotary Controller epitomized a mobile command center and allowed me to operate the multi-media functionalities of the Roll-Royce with ease. Upon arrival the photographers took over the vehicle as they snapped away while we enjoyed pre-wedding revelries.

After the ceremony, evening was upon us and time for Jenn to experience her newfangled husband alone. The Best man, Damon Redmond, escorted her inside the British chariot to ride off in style like Cinderella. I switched the soundtrack to a melodious flow and smiled as they congenially spoke of the magnificent moments that just transpired. She gazed at her ring and smiled congenially. Like a King he reveled the Kodak moment with confidence.

They say Diamonds are forever, but this is equally true for a Rolls-Royce Ghost. Cheers Steve and Jenn!