The Peninsula Classics Best of the Best Award, a 1936 Bugatti Type 57SC Atlantic

Now in its third year, The Peninsula Classics Best of the Best Award brought together eight of the world’s finest classic cars—the best of show winners from the top international concours—to compete for the title of the most exceptional motor car in the world. The Bugatti is co-owned by the Mullin Automotive Museum, and Rob and Melani Walton, located in California, USA, and was named “Best of Show Concours d’Etat” at the 2017 Chantilly Arts & Elegance.

Speaking of the award’s legacy, The Hon. Sir Michael Kadoorie, Chairman of The Hongkong and Shanghai Hotels, Limited and co-founder of the award said, “My great hope is that we not only succeed in thrilling long-term car enthusiasts, but that this award will also ignite a new-found passion for those just discovering the world of motoring.”

Powered by a supercharged engine and considered by many to be the first supercar ever made, the winning Bugatti is one of four Type 57 Atlantic models ever produced, with only three in the world remaining. The vehicle was designed at the height of the art deco movement by Jean Bugatti, Ettore Bugatti’s son. Jean based the car on his other design, the 1935 Aérolithe concept car, which was famously riveted externally, for fear of the magnesium-alloy body parts catching fire. Jean kept this signature riveted seam on the all-aluminium body of the Atlantic.

“The Bugatti Type 57SC Atlantic is the crown jewel of the automotive circuit,” said Bugatti Head of Tradition Julius Kruta. “This car was Jean Bugatti’s masterpiece with its beautiful and breath-taking lines, plus its unmatched performance for the time. Today, it remains the ultimate expression of the Bugatti legacy: unparalleled power and beautiful design.”

This model, chassis number 57374, was the first Type 57 Atlantic produced and is the only surviving “Aéro Coupé,” a designation given to the first two cars that were mechanically very similar to the Aérolithe. The car was delivered new in 1936 to Britain’s Nathaniel Mayer Victor Rothschild, third Baron Rothschild, and has since passed through few owners in its 82-year history. The car has been displayed internationally, and most recently, was on display at the Los Angeles-based Petersen Automotive Museum for the “Art of Bugatti” exhibit. 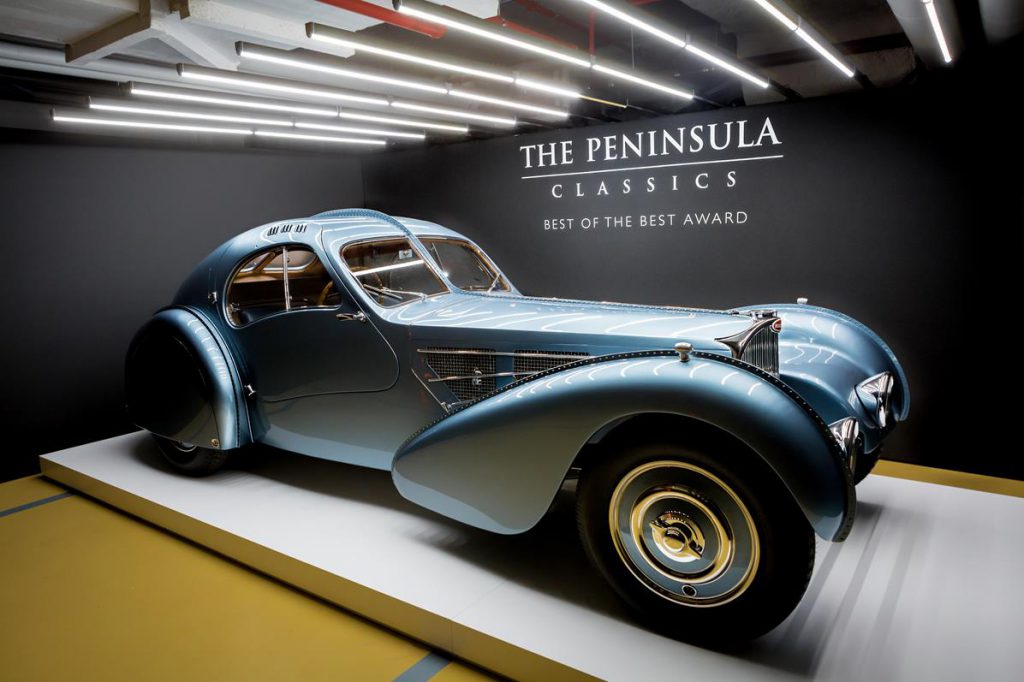 “The Atlantic represents the pinnacle of everything I adore about French automotive styling and is widely described as the Mona Lisa of the automobile collector world,” said Peter Mullin, Founder and CEO of the Mullin Automotive Museum. “From its signature curves to its aviation-inspired rivets, to the Jean Bugatti designed sleek all-aluminium body, the car is truly a remarkable piece of art. I’m very honoured to have shared it with the world amongst other worthy ‘Best of the Best’ contenders.”

“I second Peter’s thoughts – the other seven nominees were simply stunning, which makes winning the award feel even more special,” said Rob Walton, co-owner of the winning car. “What this award does is allow us to take a step back and admire the quality and beauty of the greatest classic cars in existence today. For an automotive fan like myself, it’s a joy.”

The founders of The Peninsula Classics Best of the Best Award are each known as some of the world’s foremost motoring experts, and were brought together by their shared passion for fine motor vehicles, impeccable restorations, as well as the preservation of tradition and heritage.

The Hon. Sir Michael Kadoorie, together with award co-founders Christian Philippsen, William E. “Chip” Connor and Bruce Meyer, created the award that debuted in 2016. The gentleman each cite a passion for automotive excellence as the inspiration behind the creation of The Peninsula Classics Best of the Best Award. 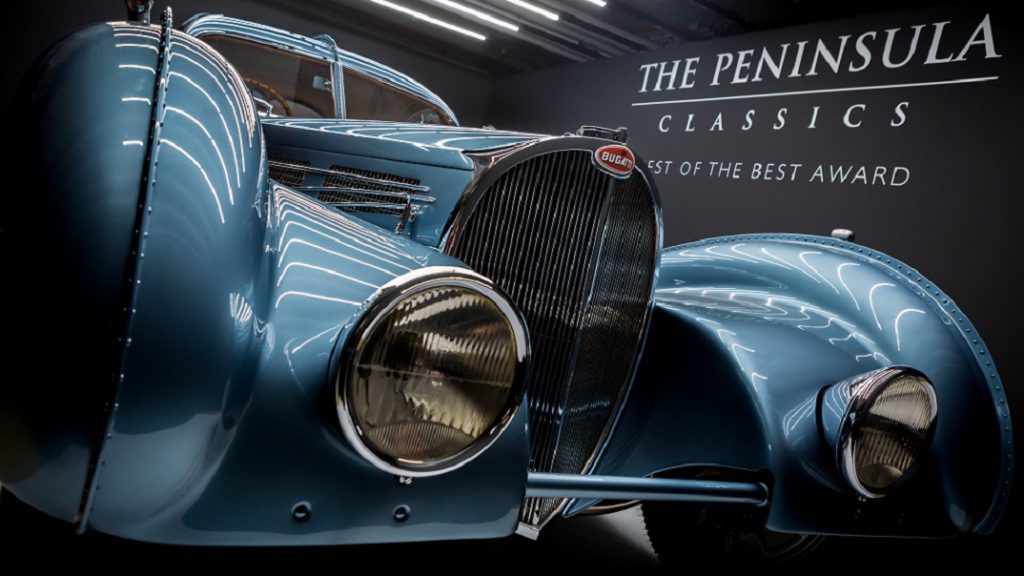 According to Bruce Meyer, “For the third year, the ultimate standard for judging The Peninsula Classics Best of the Best Award was that of uncompromised quality and design. Of course, this made the selection process most challenging for the esteemed group of panellists.” He continued: “In the end, the 1936 Bugatti Type 57 SC Coupé Atlantic emerged victorious, with its exceptional, bespoke design making it a marvellous combination of art and technology.”

Previously presented during Monterey Car Week, the award moved to Paris this year to be presented during the world-famous Rétromobile event. The Bugatti was presented at an exclusive reveal party in The Peninsula Paris’ subterranean garage, following a private dinner.

The winning vehicle was selected after being reviewed by 24 automotive experts, designers and notable celebrities within the motoring world. Learn more about each judge, in addition to the seven other nominees by clicking here.

The Peninsula Hotels, owned and operated by The Hongkong and Shanghai Hotels, Limited, is proud to sponsor The Peninsula Classics Best of the Best Award, a natural extension of the group’s passion and appreciation for luxury, travel and the motoring lifestyle. With 10 hotels in global gateway cities throughout Asia, USA and Europe, The Peninsula Hotels celebrate glamour in travel, and aims to showcase the ultimate in sophistication, innovation and design. Known for its timelessly elegant hotels, discreet integration of technology and functionality, and extensive fleet of luxury transport, the group aims to bring its heritage and expertise to celebrate the very best in the world of motoring. 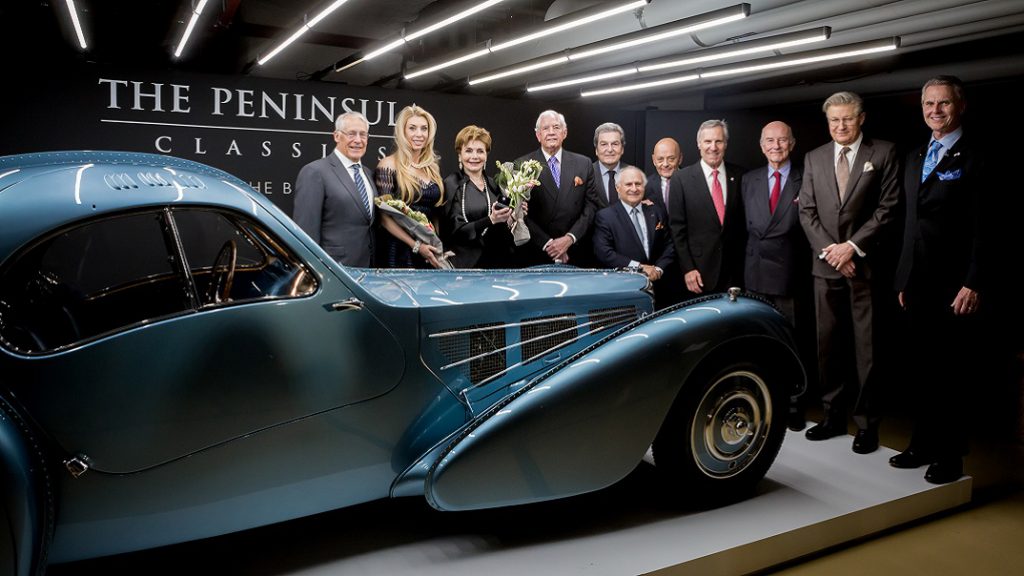