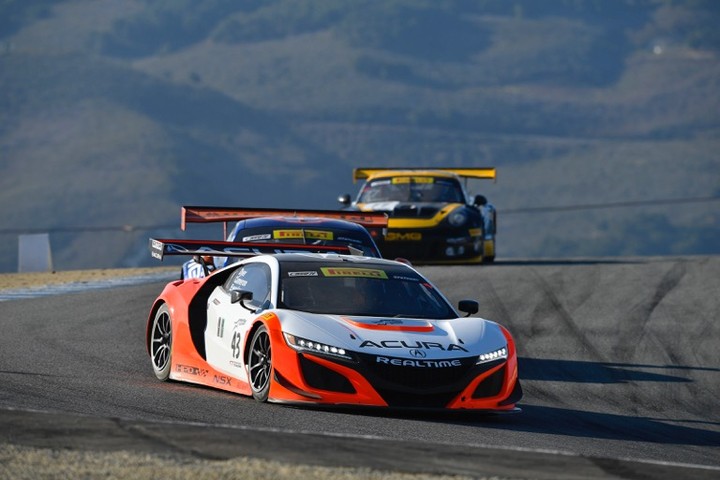 The RealTime Racing Acura NSX GT3 team capped the 2017 season with its most daunting challenge of the year, taking part in the inaugural California 8 Hour Challenge at Mazda Raceway Laguna Seca. The Acura NSX GT3ss were the same cars that finished in the top-10 in the Pirelli World Challenge GT season standings, but, unlike the series’ standard 60-minute sprint races, this weekend featured an eight-hour battle on the iconic Monterey layout.

The RTR Acuras acquitted themselves well in their first endurance event, with the #43 car of Ryan Eversley, Tom Dyer and Dane Cameron finishing fourth in the 22-car field, losing a chance for a podium following a contested mid-race safety car decision by race officials, followed by a drive-through penalty following a pit lane violation late in the contest. The #93 NSX GT3 of Peter Kox, Mark Wilkins and Jules Gounon ran well early before falling out with a cooling problem in the third hour.

“On a positive note, we were happy with our overall pace and certainly were on-target for a podium with the #43,” said NSX GT3 Project Leader Lee Niffenegger of Honda Performance Development. “Unfortunately, a procedural error by the safety car put us behind a lap, and the issue was never fully corrected.  All in all, however, it was a positive “international” debut for the NSX GT3, and we look forward to the car running all over the world in 2018.”

The #93 Acura led the team’s qualifying effort with a sixth-place grid position, but fell victim to a cooling problem in the first hour of the race. The team fought valiantly to recover, but the trouble eventually caused the car’s retirement in the third hour.

“I thought that we had a really good car,” Kox said of his time in the #93. “I could control my pace and run consistent times, which is what you want to do in an endurance race. It was tough to have the problem we did, especially in the last race of the year.”

The #43 Acura NSX GT3 fared much better, running as high as third through the first-half of the race before the disputed penalty during a caution period cost the team a lap.

“The safety car picked up the wrong car on track and that ended up putting us a lap down,” Eversley explained. “We fought hard to get back on the lead lap, and probably got back to a third-place car. On the last driver change between Tom and myself, we left the [engine] running, and that’s a drive-through penalty. I’m pretty happy we managed a fourth-place result. This team has been amazing all season long developing this car, and I’m really grateful for the hard work and dedication everyone showed.”

“As far as the race, I’m proud of everybody. It was our first endurance race,” Dyer said. “The team never skipped a beat. The only mistake was not turning off the car during the pit stop. That was [a result of] me trying to get out of the car quick, not the team. All in all, I thought we did a good job.”

The #43 team also featured the Acura debut for Dane Cameron, who will be part of the Acura Team Penske IMSA effort, which will campaign the new ARX-05 DPi prototype in 2018. The youngster came away impressed in his first outing with the squad.

“I was really impressed. The team made me feel right at home, right away,” Cameron reported. “It’s a team I’ve looked up to for a long time, since I was in junior formulae. It was a pleasure to work with them. I think the Acura NSX GT3 is going to keep getting better. Obviously, this is my first experience in it. It’s showed that it has potential against some of the best teams and driver combinations in the world.”

The Acura NSX GT3 racecar utilizes the production NSX’s lightweight multi-material body with aluminum-intensive space frame, and is powered by a 3.5-liter, 75-degree, twin-turbocharged DOHC V-6 engine. The engine uses the same design specifications as the production 2017 Acura NSX, including the block, heads, valve train, crankshaft, pistons and dry-sump lubrication system. The engine is paired with a 6-speed, sequential-shift racing gearbox, delivering power to the rear wheels. The NSX is produced at the Performance Manufacturing Center in Ohio.

Video recaps from this weekend’s Acura Pirelli World Challenge racing activities at Monterey are being posted on the “Honda Racing/HPD” YouTube channel.  Produced by the Carolinas Production Group, the video packages can be found in the 2017 HPD Trackside Video Playlist at: https://www.youtube.com/HondaRacingHPDTV.