ART-of-Motion: A Visual Art and Fashion Exhibition at the 2016 Washington Auto Show

Not even Blizzard Jonas of 2016 could stop the heat that the ART-of-Motion exhibit from Automotive Rhythms and Throttle Life were destined to bring to the 2016 Washington Auto Show. If anything, it only built upon the anticipation from the thousands of showgoers who heard many exciting things about the avant-garde design experience that befitted the culture of Washington, D.C.

With over 6,000-square-feet of space and a week full of excitement, the spectacle consisted of experiential graphic backdrops, bikes, fashion, autos, music and murals which all wowed the crowds. Each day consisted of unique activity sets, whether it was a live art installation from one of the acclaimed artists chosen to paint a vehicle or a stunning fashion show from Kas Collection. Keep in mind ART-of-Motion was noted as the most exiting display in the entire show.

To kick off the festivities on Media Day was Jamaal Newman aka Jamaal Lamaaj displaying his artistic talents on the Fit Fathers 2016 Kia Sorento SXL AWD. The Korean SUV has a progressive and sporty design and offers an appealing alternative to the competing five and seven-passenger utilities on the market, especially with its large cargo capacity. The Sorento features a 38.8 cubic foot cargo bay behind the second-row seat, with maximum capacity hitting 73.5 cubes after folding down the second row. With the amount of space to work with Jamaal had a tall task painting such a beautiful canvas. He went deep with the “As Above, So Below” conscious concept. A Yin and Yang on the hood symbolized the balance of the right side’s Lion (above representing land) and the driver’s side whale (below representing the sea).

Edward Joseph aka Ed the Artist arrived from Atlanta, GA to show off his artistic talent on the 2016 MINI John Cooper Works which was boosted by a 2.0-liter turbo 4-cyclinder with 228 horsepower and 236 lb.-ft. of torque. This is the most powerful MINI Cooper to date, zipping from 0 to 60 mph in about 6 seconds. The Automotive Rhythms MINI JCW packed a punch similar to the artwork that Ed designed it with. As an abstract artist, he specializes in lines that seek to achieve an influence using shapes, forms, colors and textures. With a smaller platform Ed wanted the vehicle to pop through vibration, so he chose to paint it in fluorescent colors and then shined black lights over top for a glowing effect. It is surely a sight to see and ready to make its way to many more art shows.

To kick off the consumer days of the Washington Auto Show was Demont Pinder coating a 2016 Jaguar XE. Visually, the XE is formed with a long hood, short rear and coupe-like roofline that is very reminiscent of the XF. The front fascia is highlighted by narrow headlamps and the symbiotic British grille, while the rear has narrow lights and bumper. Jaguar has definitely focused on a sportier appearance with this vehicle. Demont’s inspiration for the painting originated from a trip to Paris. He decided to bring this vibe back to Washington, D.C. ART-of-Motion was the perfect platform where he could create that magical feeling using the Jaguar XE as his canvas alongside a miniature structure replicating the Louvre. Demont went with satin and glossy acrylics to paint the #ParisInDC theme that consisted of the Eiffel Tower blending into the convention center and then the Big Chair monument. He then inscribed the Jaguar logo along with the British flag on a quarter panel of the hood which discreetly featured their company values. On the driver’s side homage was paid to the SS Jaguar 100 aptly dubbed after both an animal and its theoretical ability to reach 100 mph. Demont painted the entire classic on the XE using this vision and brought it to life by placing a brick wall behind it.

Next up was the GM Design team flying in from Detroit to strategically splatter a 2014 Corvette Stingray. The idea for a Corvette art car was inspired by famous artists such as Andy Warhol, Peter Max and Frank Stella, all of whom previously transformed vehicles into rolling works of art. The ART-of-Motion Corvette was created by Deadra Bell-Smith (Creative Sculpting Model Manger, Buick Design and a graduate of Detroit’s College for Creative Studies), Brett Golliff (Lead Designer, Chevrolet Performance Global Color & Trim and graduate of Detroit’s College for Creative Studies) and Tyler Mars (Senior Digital Sculptor, Cadillac Exterior Design and a graduate of Detroit’s College for Creative Studies). The trio used acrylic, water-soluble paints to generate a contemporary art design on the white vinyl-wrapped Corvette. Using brushes and paint bottles, the designers implemented a mix of patterns to decorate the sports car over the course of four hours, accompanied by music played by DJ Blinks spinning with a special Bose L1 and LS audio system that energized the artists and kept the crowd grooving.

Batting next was the Blind Whino SW Arts Club to bring vibrational dynamics to the 2016 Toyota RAV4 Hybrid which has been freshly updated with new front and rear fascias, restyled rocker panels and a newfangled tailgate design. Toyota’s latest RAV4 is powered by a 2.5-liter 4-cylinder gasoline engine and two electric motors located in the front and rear. When running both the gas engine and electric motors, the RAV4 will reach up to 194 horsepower and produce up to 206 lb.-ft. of torque. “Live Colorfully” was the chosen theme for the masked marauders who spray painted the Japanese utility with energetic flow. Blind Whino reiterated the same scheme on a mural highlighted by painted Reebok kicks.

Also on display were two Mazdas from Georgetown University. Professor L. Collier Hyams showcased the “Sassy Lassie” tartan Miata and a vibrant CX-3 at ART-of-Motion which also highlighted Mazda designs from 11 Georgetown students and Hyams. The art project is part of a partnership between Mazda and Professor Hyams’ Introduction to Graphic Design class that challenged students to create exterior artwork relating to the theme “Kodo,” a Japanese word roughly translating to “soul of motion.” Nearly 130 designs were submitted by students in November and the top three winners were chosen by Mazda North American Operations Design Director Julien Montousse. Elle Vernerey’s “Flash” took first place and Zack Bennett-Engler’s “Hyper” placed second. “It was the last thing I expected, to be honest,” Vernerey said of her pick. “I felt good about my designs, and I thought they looked cool, but there were other people in the class who were very artistic.” Flash incorporates strokes of color that make the car look as if it is moving when it is stationary. Conceiving the design took Vernerey a little more than a week, but only five hours to design it on the computer. Bennett-Engler’s second-place car was on display at ART-of-Motion alongside a decorative wrap designed by Hyams. This is the first year that Hyams has partnered with Automotive Rhythms and the second year with Mazda for the competition. 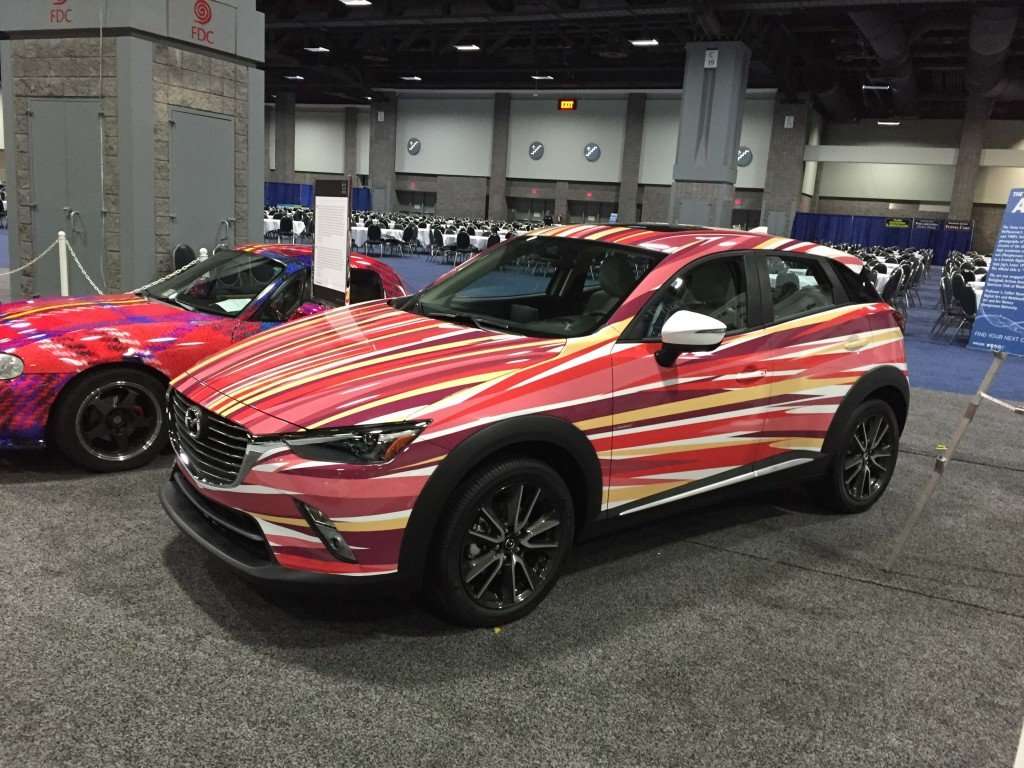 Two attention grabbers were the “APAC Auto Liberty Walk” 2014 Nissan GTR and the Star Wars 2016 Dodge Viper ACR. The Viper ACR was done up in a black livery inspired by Kylo Ren – one of the villains in Star Wars: The Force Awakens. Also on sight were two custom Polaris Slingshots from the DMV riding group known as DMV SS Riders, one of which was a custom Washington Redskins theme. The second was customized and painted to the awareness of pancreatic cancer. The owner’s mother passed away from this horrible disease so he has dedicated this Slingshot to her memory and to the awareness of the debilitating disease. 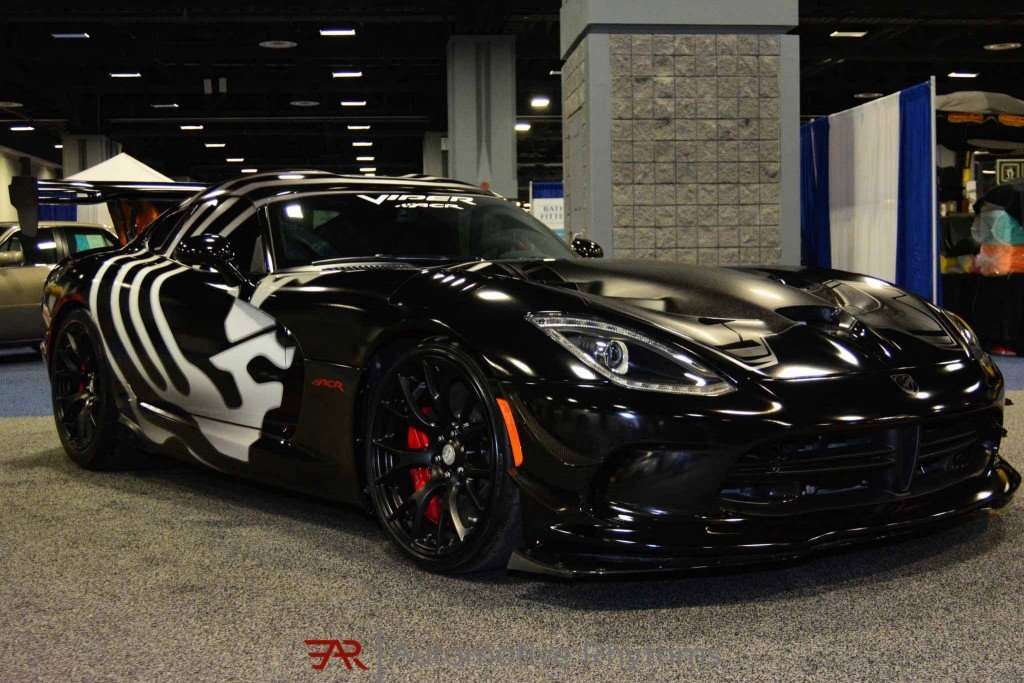 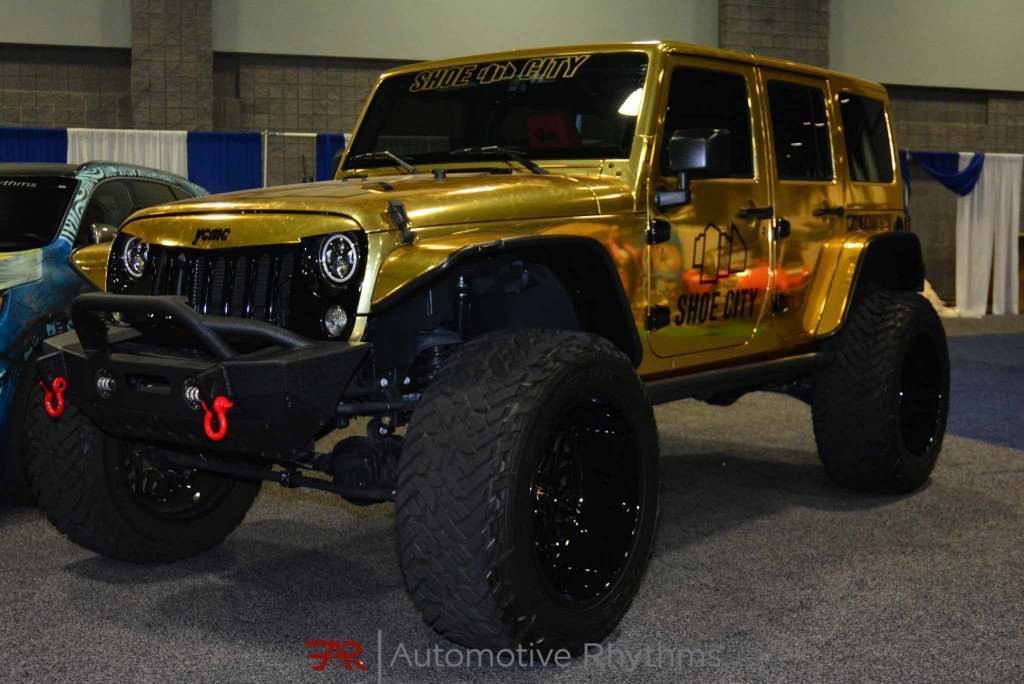 ART-of-Motion is definitely one that will go down in the history books as well as setting the standard for Car Art from remaining shows and Art Basel from here on out. A huge thank you must go to WANADA for believing in Automotive Rhythms and Throttle Life to bring this idea to life. Product sponsor Mothers Car polish supplied the exhibit with giveaways to ensure that patrons kept their rides clean with the best. And a very big thank you to our amazing audio partner Bose! Entertainment wouldn’t be the same without them.

News coverage was heavy from stations such as NBC 4, Fox 5, ABC 7, News Channel 8, CBS 9 and many more. As exciting as this year’s installment was, team AR already anticipating the 2017 show. Enjoy our photo gallery.

View more details on the bikes and slingshots by clicking here.