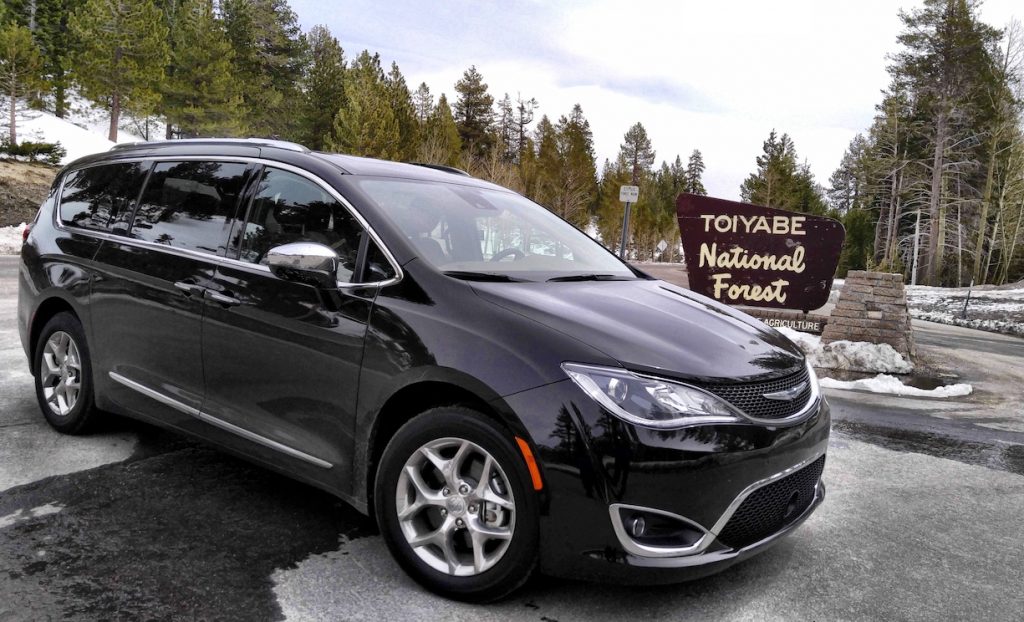 My wife and I are the proud parents of three active children so you would think with an on-the-go family of five I would be the ideal candidate for a minivan. Maybe so, but traditionally we have always been devote anti-minivan individuals. Under no circumstances have I ever wanted a minivan, considered a minivan or found them remotely cool enough for either of us. That is, however, until I spent time behind the wheel of the 2017 Chrysler Pacifica Limited.

As we approached our vacation vehicle for a West Coast spring getaway my preconceived opinions slowly started to fade when taking note of the Pacifica’s surprisingly stylish Dark Cordovan Pearl exterior hue set off by 18″ aluminum polished rims. Nevertheless, it was the opening of the automatic sliding doors revealing the cavernous cabin with the Deep Mocha Nappa leather trimmed bucket seats that garnered some of the most enthusiastic WOWs I’ve ever heard from the Brittain clan. Although the interior’s design, along with the second and third row seating configurations, impressed us I was really blown away with the rear storage area that fit three large suitcases along with three overstuffed backpacks without the need to fold down the third row seat. This feat would be absolutely unimaginable in my much larger Lincoln Navigator. 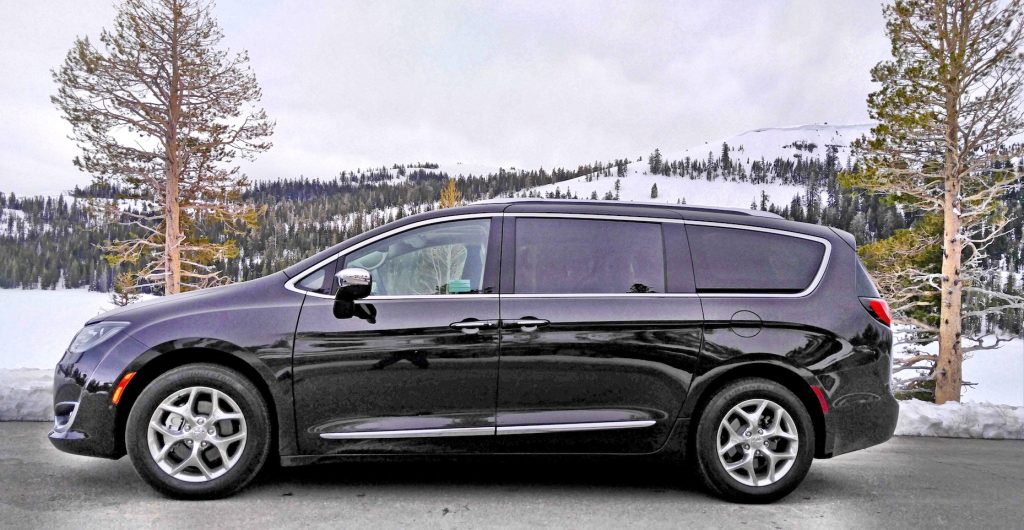 We picked up our new friend at SFO after a long flight from Maryland. Each passing mile and minute was literally a treasure trove of discovery to keep everyone occupied. Included hallmarks were the the tri-pane panoramic sunroof, the glossy and intuitive 8.4″ UConnect touchscreen entertainment and navigation system (the best the auto industry has to offer along with BMW’s iDrive in my humble, professional opinion), headrest-embedded 10.1″ HD touchscreens with Blu-ray players and downloadable games, the multitude of USB ports and 115-volt auxiliary power outlets ensuring that each passenger’s device would remain just as charged as our newfound energy. The kids immediately found and effortlessly mastered the pre-loaded game apps consisting of License Plate Game, Backstreet Bingo, Tic-Tac-Toe and Math Flash Cards to keep their creative, young minds engaged on our 2-hour road trip from the Bay Area to Sacramento.

But before leaving San Francisco we tackled this iconic cityscape without a qualm thanks in part to the Pacifica’s Hill Start Assist. The technology enabled us to pull away safely when parked on the steep incline of Leavenworth Street devoid of dreaded back-roll before making our way down infamous Lombard Street where the Pacifica navigated these snake-like, hairpin turns with the greatest of ease from the van’s efficient turning radius. 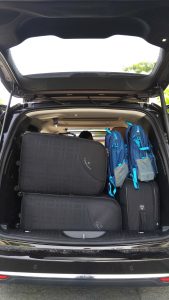 After a couple of days in Sacramento it was on to Lake Tahoe where we experienced the amenities and driving pleasures of the Pacifica in greater depth. I topped off the tank prior to departure and soon realized how fuel-efficient our getaway vehicle was. The 3.6-liter Pentastar V6 engine linked to the fluid 9-speed automatic transmission provides up to 28 highway mpg and 18 city. With the many elevation changes while twisting through the mountains — including constant acceleration when safely passing slow moving vehicles — the front-wheel drive people mover barely broke a sweat and still had 3/4th of a tank of fuel left upon arrival after 120 miles. Although weather conditions were nice for the most part Tahoe received a mix of snow and sleet which made some of the roadway a bit hazardous. Though, the Electronic Stability Control kicked in to apply braking and reduce throttle as needed and help ensure we remained in the right direction which was most comforting when looking down a 6,000 foot drop-off.

The High Def Blu-ray player along with the included wireless headphones combined with the cadre of USB ports kept our four younger passengers entertained (we picked up an extra in Sacramento) and quiet for the entire trip while the wife and I enjoyed our favorite SiriusXM stations.

After a full week in The Golden State it was time to venture back East to delve into routine. However, one final stop was calling my name. Being the motorcyclist I am I couldn’t leave the West Coast without paying homage to a Harley-Davidson dealership so I proudly parked in front with no shame doing so in this wonder-van. Of course pickups are the prototypical vehicle for bikers so most were amused when we rolled up. 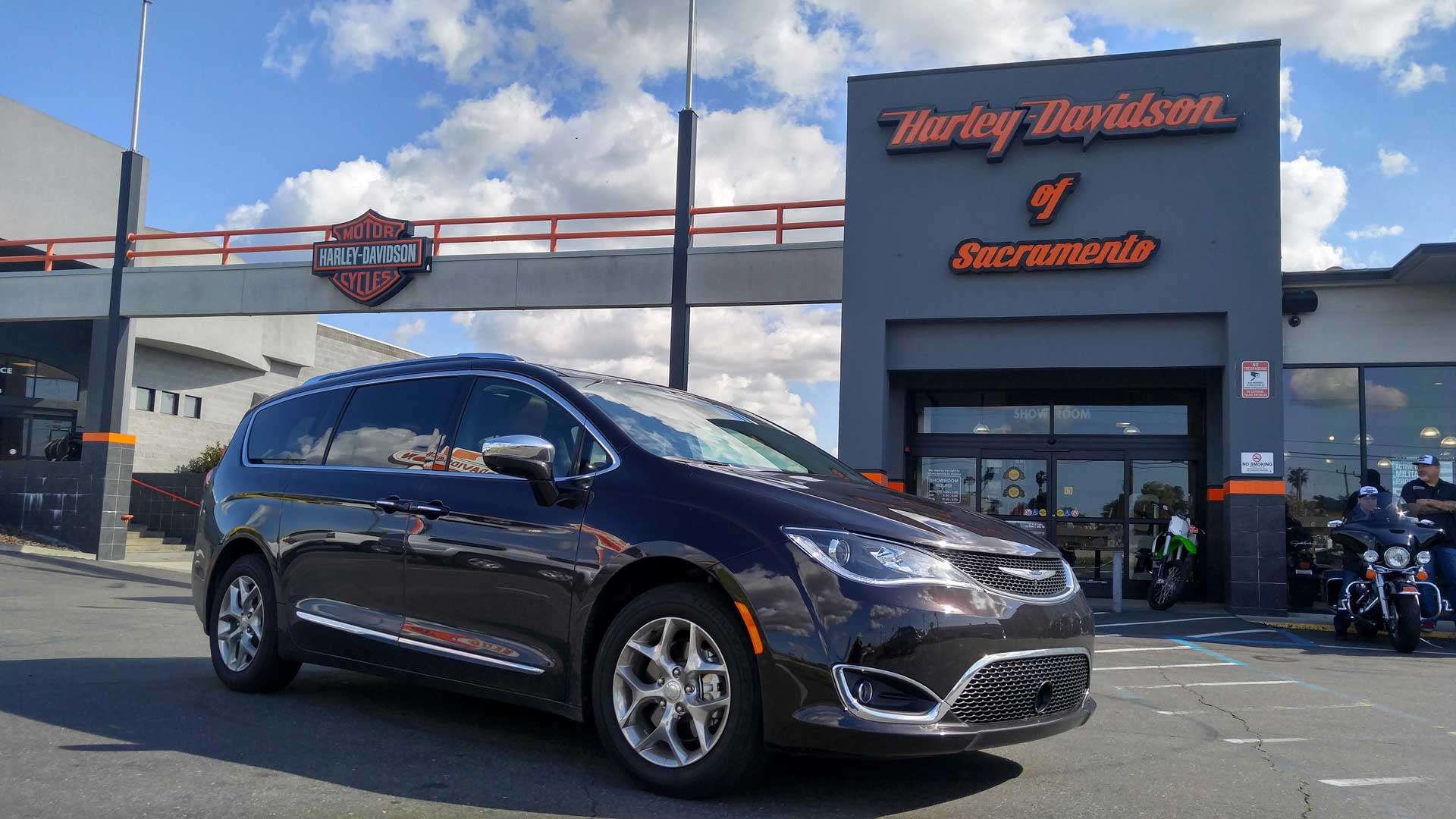 With an MSRP of $42,495 our loaded model tipped the scale at $48,280 and offered a peace of mind with an abundance of safety features such as side curtain airbags, advanced multistage front airbags, Lane Departure Warning and a 360-degree Surround View Camera. Add in a comfortable drive experience, respected fuel economy, commodious storage and the plethora of entertainment options and the 2017 Chrysler Pacifica Limited becomes not only a game changer but a mind changer as well.