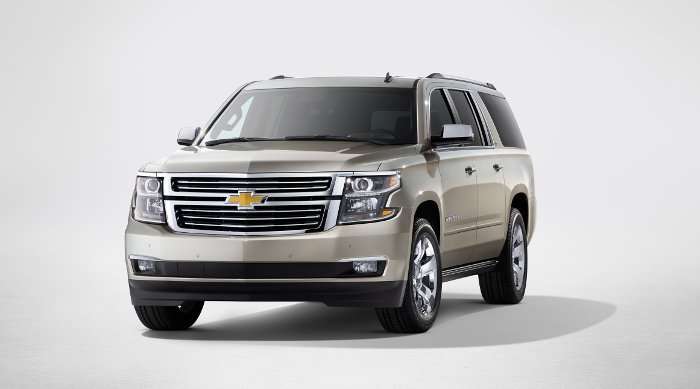 Their story is as successful as a college “Cinderella” hoops team completing a perfect season, making it to the Big Dance and leaving as champions. And as the decades passed, their stash of stealthy SUVs have only gotten better, more efficient, and of course more advanced within the world of user-friendliness and technological ergonomics. In fact, in a field of 264,000 average annual sales they dominate with 74% of the lion’s share. Since customers hold onto their pride and joy for roughly 11 years, it was essential that the all-new models were a hit right off the bat. So meet the 2015 GMC Yukon, Yukon XL and the 2015 Chevy Tahoe and Suburban. In my book they are essentially “undefeated.”

Both Napa Valley and Lake Tahoe were the destinations of choice to evaluate these four new Sport Utes from General Motors. Actually, some of these roads were adept for a Corvette than a Tahoe or Yukon. Yet, that’s where the third generation Magnetic Ride Control works its magic. Standard on the Denali, this suspension technology helps the vehicle adapt to varying road conditions like typical sports car performance. Along with StabiliTrak electric stability control with a rollover mitigation feature, new Electric Power Steering, stiffer bodies constructed from high strength steels, and better handling tires, the sizeable utilities do not ride like boats on water like their predecessors. I precisely recall a delayed steering response from some of these vehicles. You could lightly turn the steering wheel right or left and the vehicle would still be traveling straight. Not any more! Steer right and the SUV immediately turns right.

Upon first approach the basic style premise of both the Tahoe and the Yukon still exists, but with a few more curves, firmer angles and a rectangular rear fascia. The windshields have been flattened a bit for acoustic quietness but the massive side view mirrors are a tad bit noisy in the wind.  In the rear, the wiper is hidden in the spoiler of the tailgate for a cleaner and smoother look. As well, there is an option on both brands for a tailgate with programmable height settings. GM says there is no sharing of sheet metal between the two SUVs and their pick-up cousins. Yet, each receives aluminum hoods, grilles, fenders, and headlamps akin to their respective brands. But without a doubt the massively enlarged and designer metal grille and chrome rims from the Yukon and its extended Yukon XL variant are far more attractive than what the Tahoe and Suburban offer. Of course GMC recognizes that styling is key for their consumers who have an average age of 49 for the Yukon and 47 for the Yukon XL. So the final recipe was paramount to maintain the passion and energy to represent the brand, which has sold 625,000 Yukons since 1999, of which 20% is represented by the higher-end Yukon Denali moniker. GMC originally introduced the Yukon in 1992 to replace the Jimmy. 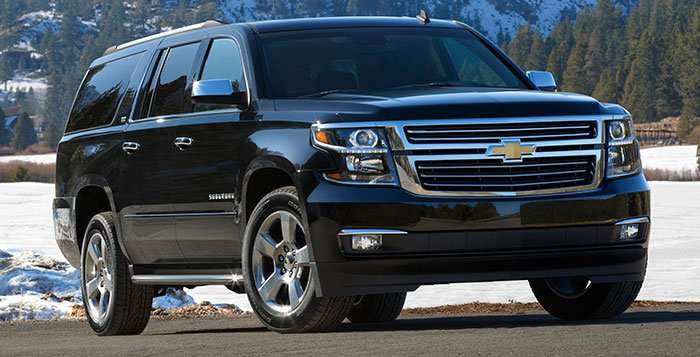 The Chevy Suburban is as timeless as the air we breathe. Can you believe this SUV limo will celebrate its 80th birthday in 2015? It’s almost mind-boggling to fathom that an automotive nameplate can withstand so many eras and still be very relevant. I personally know scores of families, including a close cousin, who owns a Suburban for the simple fact that it holds their hockey team of kids and gear or luggage. It’s meant to travel with eight passengers and a bevy of supplies without qualm. There was never a need for fancy gadgets and stylish interiors. The basics, along with volume, were the elemental equation for the Shaq of SUVs. However, in the latest generation Suburban and Tahoe, you will step into an interior world reminiscent of a base Cadillac Escalade. What you see is what you get including leather seating, heated steering wheel, Safety Alert Seat (vibrates when you veer out of lane without signaling), digital tachometer, push-button start, 2nd and 3rd rows that fold flat, heated 2nd row seats, and 8” MyLink touchscreen and multi-media system, available Wi-Fi with OnStar 4G LTE that can connect up to 7 devices (available 3rd quarter for an additional $10 a month to your AT&T plan), and as many charging locations as eggs in a carton. So as you can imagine I was highly impressed when I sat behind the wheel and immersed myself in all the fun, entertaining, and engaging functions and amenities of the Chevy trucks, of course wondering what my cousin and her army of children would think. Chevy says both the Tahoe and Suburban are EPA estimated to reach 16 mpg city and 23 mpg highway for the RWD which is representative of almost a 10% highway increase and a 7% city increase. Expect a $44,600 MSRP for the 2015 Tahoe and $47,300 for the 2015 Suburban excluding destination charges.
Yes, the Yukon and Tahoe and their long-wheel base variants are nice, luxurious, comfortable SUVs, but as with all trucks power and towing capabilities are always pivotal factors. So GM empowered them with a 5.3-liter V8 with 355-horsepower, 383 lb.-ft. of torque, Active Fuel Management and Direct Injection. A 6-speed automatic transmission is paired to this engine, and along with RWD, and a solid rear axle, the SUV can haul 8,300 lbs. (8,000 lbs. with 4WD) admirably. This powertrain felt strong with effective acceleration points without feeling weighed down. Though, the Denali XL’s 6.2-liter V8 with Active Fuel Management and Direct Injection with 420 horsepower and 460 lb.-ft. of torque I drove on the morning leg was a pure beast!

Speaking of the Denali, my favorite truck during the scenic drive from Sacramento to Lake Tahoe was the 2015 Yukon XL Denali 4WD. It offered a mix of capability and refinement. Chrome trimmings and 20” chrome rims sparkled like jewelry and the interior emotionally stirred the soul. GMC uses real burl wood, a retractable 8″ touchscreen LCD screen — the principle feature of IntelliLink and the navigation — connectivity in all three rows, and of course a sunroof, but it didn’t extend to the second row because of the old school DVD entertainment system that hangs from the ceiling. The icing on the cake is the 10-speaker Bose Center Point surround sound audio system which is also used in the new Escalade. It is by far the most advanced work of art Bose has ever engineered. Yet, you have to pay to play and this model starts at $68,380 with options totaling it to $73,535 including a $995 destination charge.

GM calls it “360 degree safety” for a reason. The evolution of their preventative protection measures and driver conveniences includes nine new active safety technologies. Radar, cameras, and ultrasonic sensors work in unison for Adaptive Cruise Control, Lane Change Alert and Forward Collision Alert, and Front and Rear Park Assist, while a front-seat center airbag deploys upward to keep passengers from hitting each other in a crash. Moreover, OnStar is enhanced with Automatic Crash Response that unlocks doors and shuts off the fuel system. And what about keeping your precious vehicle safe from predators? Well, these SUVs are highly sought after on the black market by auto thieves. To help foil offenders, they now have up to 14 anti-theft enhancements such as a glass-break sensor, interior movement sensor, and redesigned mechanisms to prevent Slim Jims from doing their dirty work!

Chevy and GMC are in a great place right now. They’re atop of their own kingdom with continuous advancements to appease consumers. It is pretty much a shoe-in that things will remain the same for years to come for the Yukon, Yukon XL, Tahoe and Suburban. Job well done General Motors.