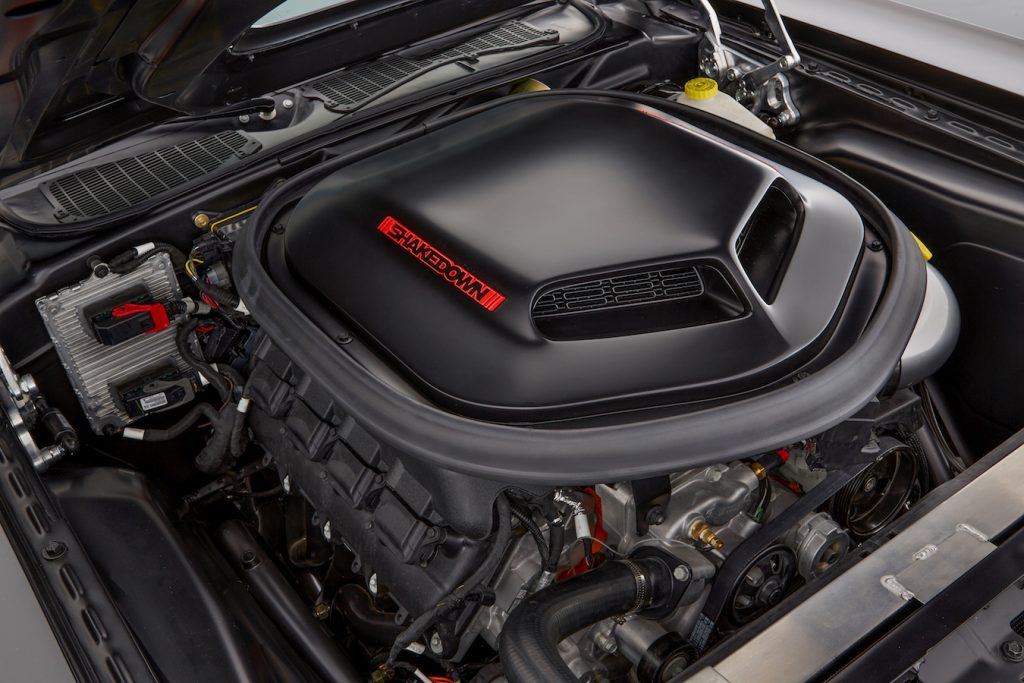 The Mopar brand announced today during a press event at the Specialty Equipment Market Association (SEMA) Show in Las Vegas new Mopar Crate HEMI Engine Kits that provide enthusiasts a factory-backed, efficient option for plugging Gen III HEMI engines into iconic Mopar vehicles from the 1970s and earlier. The new Mopar 345 Crate HEMI Engine Kit for the 5.7-liter engine and Mopar 392 Crate HEMI Engine Kit for the 6.4-liter HEMI can be paired with model year 1975 and earlier vehicles, enabling owners to inject modern HEMI power into muscle-car era machines such as the Dodge Charger, Dodge Challenger, Plymouth ‘Cuda and many other makes and models.

“Our new Mopar Crate HEMI Engine Kits answer enthusiast demand for a relatively simple solution for plugging modern-day HEMI engine power into their classic Mopar rides,” said Pietro Gorlier, Head of Parts and Service (Mopar), FCA – Global. “The engine kits include the hardware to plant a 5.7-liter or 6.4-liter HEMI engine under the hood with the factory-backed confidence that comes when using Mopar parts. They also offer optional front-end accessory kits like power steering or even exhaust manifolds to make installation easier. Starting today, our fans can order the kit online and start working on their favorite project with the peace of mind that comes when using a Mopar product.”

The Mopar 345 Crate HEMI and 392 Crate HEMI Engine Kits, both available for purchase now through FCA US LLC dealers either in-store or online at www.Mopar.com/CrateHEMI, include a power distribution center, a powertrain control module (PCM), engine and chassis wiring harnesses, an accelerator pedal, O2 sensors, ground jumper, charge air temperature sensor and in-depth information sheets on installation. The kits, compatible with respective 5.7-liter or 6.4-liter engines built in 2014 or newer, are shipped in distinctive packaging featuring either the 345 or 392 logo. 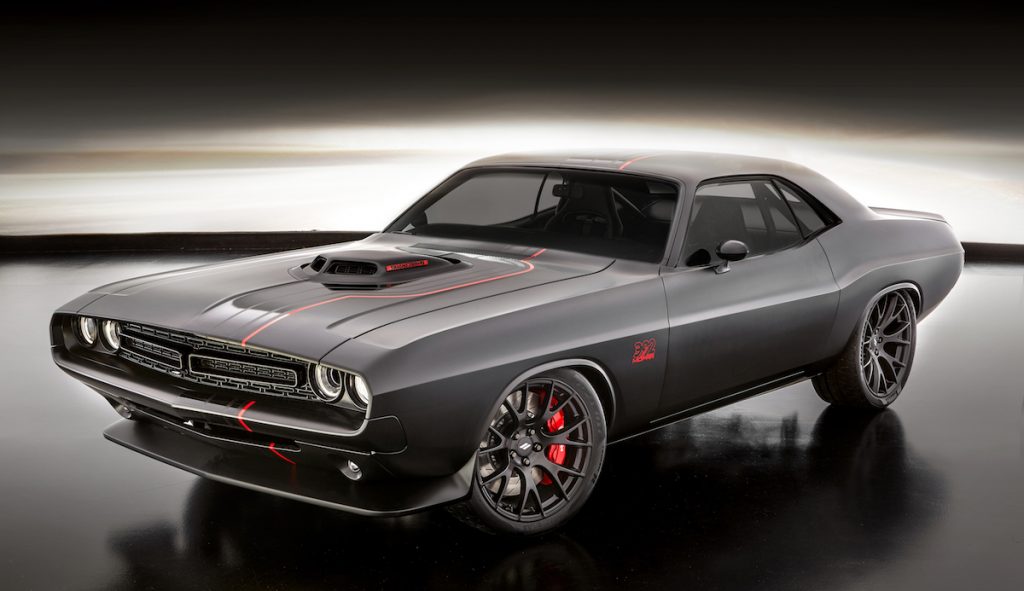 Dodge Shakedown Challenger
The Dodge Shakedown Challenger weaves together design cues from the past and present to create a uniquely original Mopar creation. The blend of yesterday and today is distinctly visible through exterior and interior styling, but comes to throaty fruition under the hood, where Mopar installed its new 392 Crate HEMI Engine Kit to help administer a 6.4-liter HEMI jolt to the heart of the classic 1971 Challenger.

The Shakedown Challenger drives 485 horsepower to the pavement via a Viper Tremec T6060 six-speed transmission, and the Mopar 392 Crate HEMI Engine Kit-enabled 6.4-liter HEMI is further augmented by a Mopar concept cold-air intake and Mopar custom dual exhaust with black powder-coated Mopar exhaust tips. The custom front and rear suspension is lowered, dropping the Shakedown closer to the road — or to the track — creating a capable performer versatile enough to tackle the street or Pro Touring/Drift-type motorsports competition. Braking power is supplied by Brembo-red SRT® Hellcat six-piston front brakes and four-piston rear brakes.

The merging of old-school muscle with the 21st century is quickly evident on the “Bitchin’ Black” exterior, hung on a unique hand-built, one-off frame with a removable body. The Dodge Shakedown Challenger rolls on concept SRT Hellcat Slingshot-designed 19-inch by 9 1/2-inch front and 20-inch by 9 1/2-inch rear wheels, providing a “coiled” stance. A heritage-inspired 1971 Shaker hood scoop is added with help from select parts from the Mopar brand’s modern-day Shaker hood kit, feeding fresh air to the HEMI®powerplant.

The Shaker hood scoop is accented on top with a black “Shakedown” badge outlined in red, tying in neatly with custom gloss-black and gloss-red stripes that hug the scoop and flow down to the fascia and also up and over the roof to the tail, extending around and underneath the valance.

The 1971 Dodge Challenger body is shaved, deleting the door handles, drip rails and fuel door, which is relocated to the trunk. The Dodge Shakedown Challenger incorporates concept front headlamps and taillamps from the 2017 Dodge Challenger “massaged” to mesh seamlessly with ’71 Challenger proportions. The headlamp bezels are Satin Black, as are the housing and surround of the tail lamps, which feature lenses trimmed in red. The modern Challenger grille and surround also get the Satin Black treatment, set off by gloss-black grille bezels. Satin Black also colors the concept rear spoiler and chin spoiler, fog lamp bezels and mirror caps. Matching red Mopar 392 Crate HEMI Engine Kit logo decals on the front fenders complete the exterior.

The Shakedown’s potential as a track performer is catered to with a custom roll bar and rear seat delete, replaced with netting and a console shelf for storing racing essentials. The fuel cell and lines are stored in the black-carpet lined trunk. 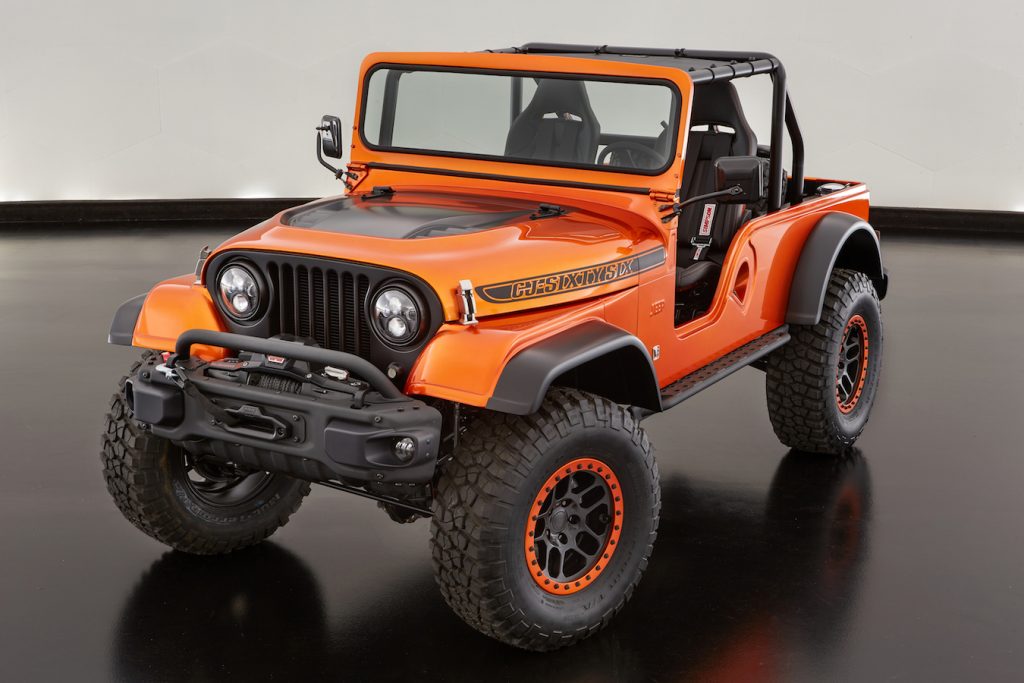 Jeep CJ66
Take a Jeep Wrangler TJ frame, hang a 1966 Jeep Wrangler CJ universal Tuxedo Park body on it, add in Wrangler JK elements and power it all with a Mopar 345 Crate HEMI Engine Kit-enabled 5.7-liter HEMI and you’ve got the Jeep CJ66. The unique cocktail of three Jeep vehicle generations and HEMI power demonstrates that Mopar Crate HEMI Engine Kit applications are also just a plug ‘n play away for those more at home on the trail than the street.

The narrow-bodied Jeep CJ66 harnesses the 383 horsepower of the 5.7-liter HEMI engine with a six-speed manual transmission. A Mopar 345 Crate HEMI engine cover shelters the HEMI, and a Mopar cold-air intake and Mopar cat-back exhaust bump up off-road performance a notch or two. Front and rear Mopar Dana 44 Crate axles help the HEMI-fueled Wrangler easily crawl over rocks and boulders.

The Copper Canyon skin is highlighted on both sides with a custom matte-black CJ66 graphic stripe that runs along the side of hood and trails down to the cowl. The concept hood, bezel and latch are also colored matte black, along with the iconic seven-slot Jeep grille and bezels of Wrangler JK headlamps. Mopar LED amber fog lamps and a Mopar Warn winch, with a fair lead adapter to guide the winch cable, augment the CJ66’s off-road capabilities. The custom, race-car inspired fuel filler cap is shifted to the inside fender wheel well.

Looking out from the two-inch cropped windshield, the driver and passenger are perched in custom Viper seats featuring concept seat risers. The cockpit is surrounded by a custom-built roll cage, mandril-bent to match the windshield surround. A bikini top netting offers shade and cover from the elements. The center of the custom steering wheel, stamped with the special 50th Anniversary Moab Easter Jeep Safari logo unveiled by the Jeep brand earlier this year, reveals the CJ66’s Moab-inspired origins. A Wrangler JK center console and shifter were imported, with Mopar instrument panel gauges and Mopar all-weather mats completing the interior.

The green ‘Cuda, one of Worman’s personal vehicles, hitches the HEMI engine’s horses to a Tremec T56 Magnum transmission, modified to bolt to the 6.4-liter powerplant. The build is a pure, ground-up restoration, aside from the brand-new Mopar Crate HEMI Engine Kit and engine under the hood, and a tweak to the ‘Cuda’s rear HEMI graphic, altered to 392 to reflect the new Mopar kit. Worman installed more than 100 factory parts supplied by Mopar, many available via the brand’s new restoration parts site, www.Mopar.com/restoration, created to connect enthusiasts with the brand-approved products needed to bring a classic Mopar back to life.

Head of Mopar Pietro Gorlier visited Worman’s shop in September to check out the progress of the build, and Worman joined Gorlier onstage at SEMA to participate in the reveal of the kits and also preview footage from the ‘71 Plymouth ‘Cuda/392 Crate HEMI Engine Kit build.

About Mopar Brand
Mopar (a simple contraction of the words MOtor and PARts) was trademarked in 1937 with the launch of an antifreeze product, but it truly made its mark in the 1960s during the muscle-car era. From Mopar Performance Parts to enhance speed and handling for both road and racing use, the brand soon expanded to include technical service and customer support.

Mopar parts are engineered together with the same teams that create factory-authorized specifications for FCA vehicles. This offers a direct connection that no other aftermarket parts company can provide. A complete list of Mopar accessories and performance parts is available at www.mopar.com.