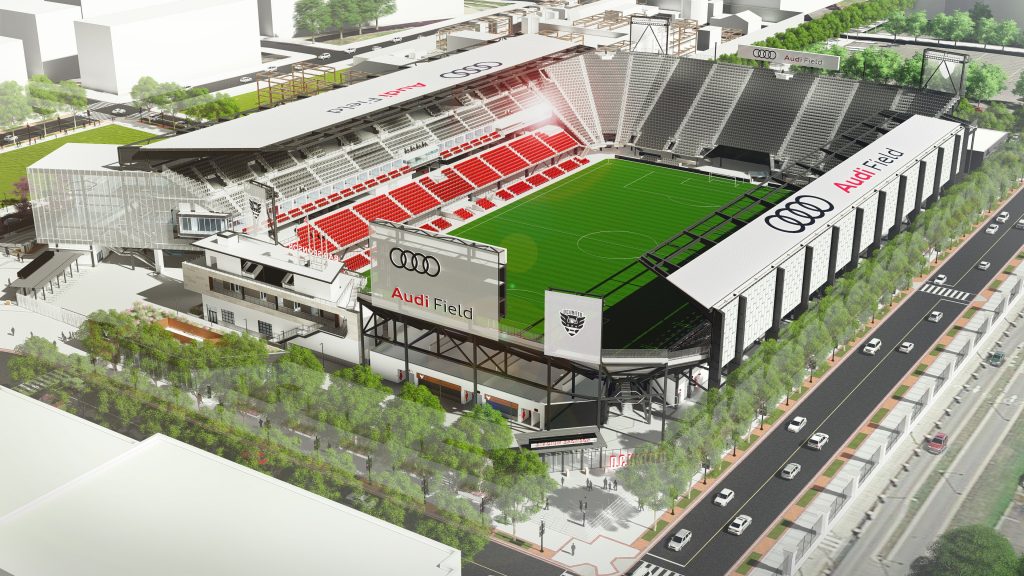 Audi Field will be the home for D.C. United, the most decorated franchise in U.S. soccer history and the most successful professional team in the nation’s capital. Opening in 2018, the state-of-the-art, Audi branded facility will also host a variety of sporting, music and cultural events along the newly developed D.C. southwest waterfront.

“We are excited to work with D.C. United and to continue our support of soccer in America as well the community near our Northern Virginia headquarters,” said Loren Angelo, vice president of marketing, Audi of America. “This commitment helps Audi connect with passionate soccer fans of all ages and the greater community through unique experiences that continue to elevate their excitement in America’s fastest-growing sport.”

Audi has long been a champion of soccer and the progress of the sport. In 2015, Audi of America became the official automotive sponsor of Major League Soccer in the U.S. The league sponsorship helps Audi reach a diverse, passionate and fast-growing audience that has supported the brand’s strategy of reaching the next generation of Audi buyers. Through this partnership Audi of America continues to fuel the enthusiasm of soccer stateside and help drive participation of the sport in a new way such as the 2016 introduction of the Audi Player Index.

“We are thrilled to partner with such an incredible brand that is not only recognized in North America, but throughout the world. Audi has transcended the automobile industry and fully embraced the culture of soccer, especially in MLS,” Jason Levien, United Managing General Partner, said. “We couldn’t think of a better partner to name our stadium and we look forward to forging extraordinary memories for years to come at Audi Field.”

In addition to its U.S.-based relationships, Audi Germany has sponsored FC Bayern München since 2002. Highlights of the partnership include the Audi Cup held every two years since 2009 and the Audi Summer Tour abroad. Last summer, the brand accompanied Bayern’s training camp to the U.S. where the team played AC Milan, Inter Milan and Real Madrid.

Audi Field
With the support of Audi and through an integrated design approach, the cutting-edge D.C. United stadium will be a leader in progressive mixed-use accessibility. Helping ensure a commitment to environmental sustainability, upon completion the facility is expected to receive a Leadership in Energy and Environmental Design (LEED) Gold certification. The development will ensure a facility of aesthetic, architectural, and functional excellence for the greater D.C. area fans.

D.C. United plan to break ground on Audi Field in the first quarter of 2017 with a primary goal of creating a fantastic experience for all D.C. United fans. The state-of-the-art urban facility will feature 31 luxury suites with capacity for 20,000 fans, as well as a bike valet and 500,000 total square feet of retail space on site, making it at 365-day destination for fans and D.C. residents alike.