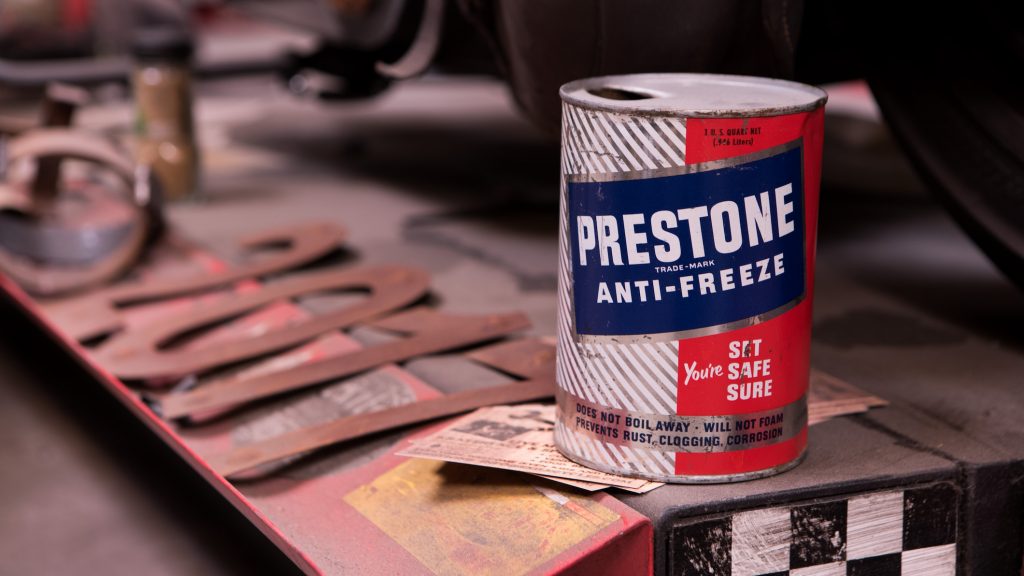 Lake Forest, Ill. – Before Prestone started in 1927 with the introduction of its breakthrough ethylene glycol formula, drivers had been using highly flammable alcohol. Now celebrating its 90th Anniversary, Prestone Products Corporation has grown to become the leader in under-the-hood chemicals and its iconic yellow jug continues to be the overwhelming choice to protect today’s automobiles. Throughout its history, Prestone has offered premium fluids to protect engines.

While the official anniversary date is June 5, Prestone is getting a head start on a long-term campaign to celebrate this momentous year. The brand has planned multiple activities throughout the year, including a large-scale, nationwide search for branded memorabilia to uncover previously lost or unknown artifacts from the brand’s past. The company is looking for vintage Prestone signs, cans, bottles, advertisements and any other historical items. Found items will ultimately come to rest in permanent display at the Prestone corporate archives. Noteworthy submissions may also be included in nationwide museum exhibits.  Longtime fans and users can learn more about how to participate on the official Prestone Instagram and Facebook pages.

Additionally, the brand is engaging in exciting new partnerships this year, including a new deal with premium automotive auction house, Barrett-Jackson. Prestone will also continue its partnership with The Ringbrothers, who will be building a custom 1972 AMC Javelin AMX in honor of the brand’s anniversary. To celebrate the brand and highlight the build, Prestone will kick-off the 2017 Specialty Equipment Market Association (SEMA) show with a rally from Los Angeles to Las Vegas. More details on this rally will be shared in the coming months.

Prestone is also launching a Truck & Trailer Program that features a customized Ford F-750, currently being designed and built by the DieselSellerz. The program will activate at key auto and aftermarket events around the country, including the Hot Rod Power Tour, SEMA, PRI and multiple Goodguys Rod & Custom Association events.
As the company continues to celebrate all car enthusiasts in this landmark year, Prestone will preserve its leadership position for the next 90 years and beyond.

“It’s incredible to think about how far the automobile has come in 90 years and how Prestone products have led the industry with innovative technologies to keep those cars in optimal condition,” said Steven Clancy, President of Prestone Products Corporation. “We’re extremely proud to have pioneered hundreds of technological advancements that help car owners safeguard one of their biggest investments.”

Prestone will continue to release details about anniversary plans for the year. For more information, please visit prestone90years.com.