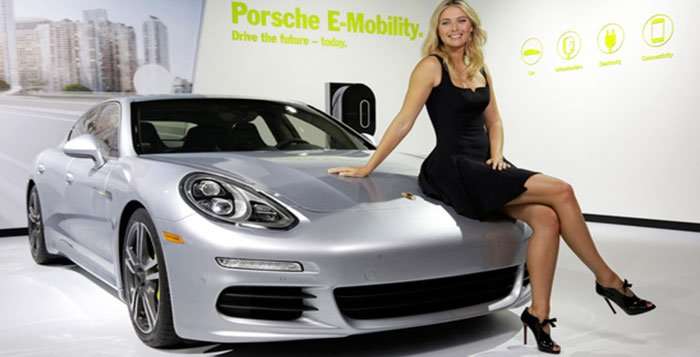 If beauty is heralded by the eye of the beholder, then it can be righteously articulated that performance remains in the clutches of the pilot. Whether it is superior match play at the Sony Open, riveting road bending on Germany’s infamous Autobahn or touring Miami’s Biscayne Blvd, accelerated performance, bespoke craftsmanship and defining leadership are precursors for elitism. So do you think it was coincidental that tennis great Maria Sharapova and Porsche collaborated and interchanged brand identities with one another? The answer is an emphatic no.

Through the diverse roster of the Panamera family, Porsche is currently able to meet customer’s needs emblematic of style, grace, comfort and earth-friendly compassion with the introduction of the Panamera S E-Hybrid which is geared towards — not only power and opulence — but also efficiency and electric progress. Since past performance is not always indicative of future results the S E-Hybrid is instilled with a stronger electric motor than the prior generation model. In addition, its higher capacity battery is more energetic allowing for longer charges, which can be restored at home or via public charging stations. The “corporate social responsibility” factor benefits both Porsche and owners equilaterally. Though, let’s make no mistake, the Panamera is a polarizing piece of machine with nothing understated regarding its silhouette. Now a pillar of society, the 4-door sport car is a German symbol of success.

Of course Miami elevates the mind states of residents and visitors alike with tropical weather, delectable culinary experiences, entertaining nightlife and immense cultural experiences such as the Perez Art Museum, Bal Harbour, New World Center, Ziff Ballet Opera House and the Lowe Art Museum. Visiting the Sunshine State to attend the Sony Open and watch the “elegant assassin” in action was breathtaking. Especially since the 26-year-old, Russian-born player adopts beast mode when striking to her opponent’s service box, yet moves pleasantly like a butterfly off court. It’s the allure of pro sports where the athlete represents multiple personas while attracting millions to their respective fan base. Sharapova, who is Porsche’s brand ambassador for the next three years, is no stranger to greatness. Not only does she adore the aggression of a Porsche 911 but also craves the amenities and ease of a Panamera, especially when traveling on tour. The relationship is a score for both parties since she’s been victorious at all four women’s Grand Slam tournaments and ranked number 1 for an aggregate 21 weeks in her illustrious career. “Maria Sharapova is an exceptional athlete. She combines top performance in her sports with elegance and power. These are precisely the qualities that are embroiled in our sports cars,” stated Matthias Mueller, CEO of Porsche AG.

To be specific, our White S E-Hybrid plug-in was civil and well-mannered on the sun-kissed roads of Miami Beach. Acceleration was gradual and quiet as expected. It plugs into typical home outlets for convenience and is able to regenerate power for the 9.4 kWh lithium-ion battery when driving (E-CHARGE). Starting at $99,000, this model can deliver up to 22 miles on a good day in full electric mode (E-POWER) and is defined by its Acid Green brake calipers and trim highlights.

As stated the Panamera has a specification for every character type. Unlike many larger vehicles, it feels light on its feet and agile around seriously, curvy roads. Since the cockpit plants you low in the driver’s position in correlation to the center console, you literally feel like a pilot, especially with its advanced array of switches, toggles and input buttons to engage various functions. For instance, press the center console switch (picture of exhausts tips) and the Panamera sings enchantingly through every gear. Here is where adjustments can be made manually to the suspension height, transmission, traction control, rear spoiler deployment and HVAC settings. Select “Sport” mode and the system measures the Panamera’s road reactions and adjusts steering, throttle, damping and gearing accordingly. “Sport Plus” elevates those algorithms and remains continuously aggressive through all gears. The busy but intelligent cockpit layout continues into the center stack which features another set of buttons to operate the navigation, audio, telematics and each entertainment service bundled within the Porsche Car Connect app. It’s a vehicle you take your time with in Miami. On Ocean Drive you want to be recognized with infatuation.

It was a beautiful day of driving. We ended our tour back at the Regis which is an extravagant haven for those looking for the finer things in life. I spoke intimately with Maria before dining at the critically acclaimed J&G grill where Chef de Cuisine Brad Kilgore prepared nourishing miracles to our satisfaction. The tennis player spoke candidly about giving back to the community and running businesses outside of tennis. It’s exhausting and tough but very much fulfilling she explained. “This is a really special day for me,” said Sharapova. “I have had the privilege to be associated with some of the best brands in the world, but to be partners with Porsche, is such an amazing honor!”