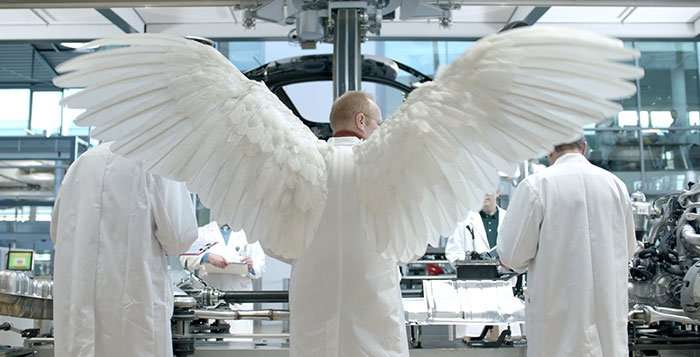 Volkswagen of America, Inc. officially kicked off advertising’s premier event with the unveiling of its new Game Day commercial. Viewers can catch “Wings” on the automaker’s YouTube® channel before it airs in the second quarter of the Big Game this Sunday. This is the fifth consecutive year that Volkswagen has advertised on Game Day.

“The Big Game is a unique chance for Volkswagen to entertain tens of millions of people and to show consumers why we have so much pride in the brand,” said Vinay Shahani, Vice President, Marketing at Volkswagen of America, Inc. “We are thrilled with this year’s creative, which highlights the enthusiasm around our brand and our vehicles’ German engineering in a humorous spot that embodies the Volkswagen spirit.”

Volkswagen’s 2014 Game Day commercial “Wings”, developed by ARGONAUT, a San Francisco-based creative agency, centers around VW’s 100,000 mile claim – that the brand has the most vehicles on the road with over 100,000 miles*.

With a legacy of human stories told simply, this year’s spot builds on the brand’s recent Game Day advertising tradition of adding a Volkswagen spin to American pop culture.

The 60-second spot follows up Volkswagen’s teaser “Algorithm,” also created by ARGONAUT. Released on January 21, 2014, the teaser gave viewers a glimpse of what the Big Game spot might have looked like if Volkswagen had handed the creative reins over to the brand’s quirky and enthusiastic German engineers. The teaser pokes fun at Volkswagen’s perfectionist culture while “Wings” celebrates our engineers’ devotion to the design of our vehicles.

As a brand that enjoyed immense success launching its spot early on YouTube with “The Force” in 2011, it is no surprise that Volkswagen is moving into the game itself with a multi-faceted digital and social campaign, concepted and produced by Edelman Digital, Volkswagen’s social Agency of Record.

The iconic German engineers featured in “Wings” will take to social media, attempting to explain the formula to create the most entertaining Game Day experience. The engineers will be featured in a series of funny videos across Volkswagen’s owned social channels. These entertaining segments will debut before the Big Game, as well as during the game itself with live video responses on the gridiron action.

Continuing to play off of the German engineers’ formulaic approach to Big Game fun, Volkswagen will launch a homepage masthead takeover on YouTube beginning February 3rd. Dubbed the “Internet-ifier 5000”, the unique online experience encourages fans to remix Volkswagen’s Game Day commercial with some of the web’s most iconic memes – such as cats and babies – to make the Big Game spot even “Internet-ier.”

Additionally, the spot provides so many comedic bits that Volkswagen has turned several of them into GIFs, which fans will be able to share online. Consumers can follow the fun by visiting: facebook.com/VW or twitter.com/vw.

*Calculation of total vehicles with over 100,000 miles per brand based on Wolfram Alpha (www.wolframalpha.com) average mileage per year data and IHS Automotive: Polk global registrations in 49 countries, as of November 2013.