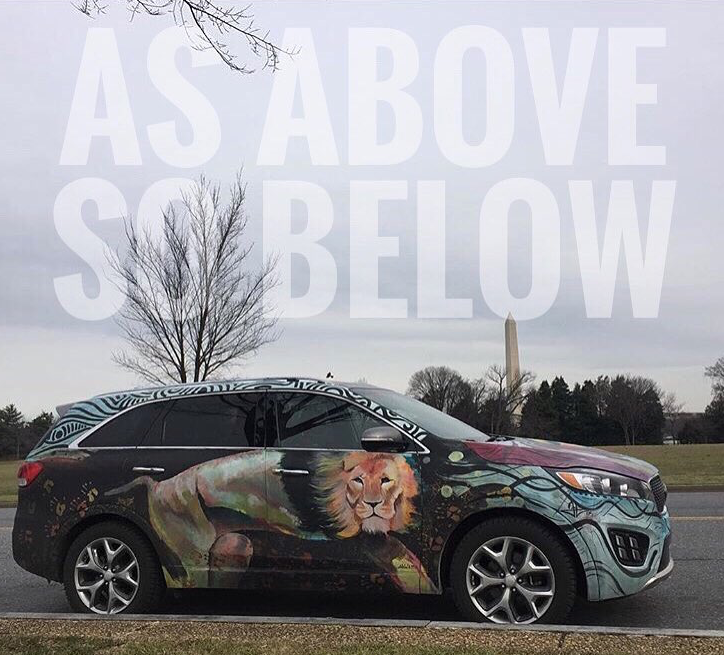 My latest Automotive Rhythms project combined my passions for automobiles and the arts. Our 2016 Kia Sorento SXL 2.0T AWD was also the canvas for artist Jamaal Newman’s creation during the ART-of-Motion (AOM) exhibit in Washington, D.C. aka As ABOVE, So BELOW.

Jamaal was one of the featured visual painters of AOM produced and executed by Automotive Rhythms during the 2016 Washington Auto Show. He painted the Sorento live during the Auto Show in just under 13 hours. Inspired by the South Korean origin of Kia Motors and his research on the Korean War, the artist wanted his creation to symbolically unify North and South Korea. As ABOVE, So BELOW features a lion from Zion on the passenger’s side representing the North while a shark on the South guards the driver’s side. Unification is represented on the hood, meshing the Korean flag with the Yin and Yang badge to signify balance in Korea. Stated Jamaal, “Through my creative vision I wanted to bring equality and unity to Korea.”

So how do you turn a new ride into a temporary canvas? Take it to a shop like Street Dreamz Customs in Maryland and have professionals wrap it first to protect the original finish. Jamaal used the same processes and materials that an artist would on canvas starting with a matte white base coat so the acrylic paint would adhere correctly. He then loosely blocked out all shapes and chose three primary colors to create the hues and shadows needed to bring the lion and the shark to life in their natural habitats. 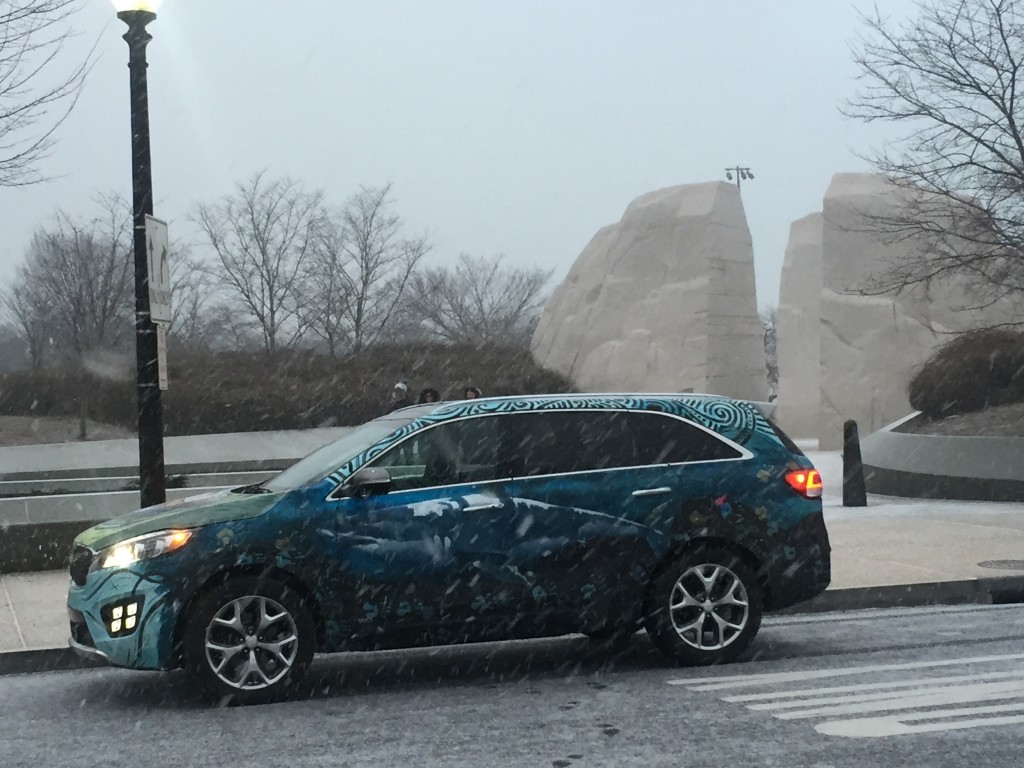 I was inspired by the As ABOVE, So BELOW theme to take the Sorento Art Car on a historical tour of Washington, D.C. Some of the locations chosen juxtapose the Sorento with national and local landmarks symbolizing the close relationship between the U.S. and South Korea and also highlight the Sorento’s beautifully styled exterior. I got a kick out of watching people react to the Kia as I drove by including lots of gawkers, thumbs up and smiles. As ABOVE, So BELOW is public art at its best.

Many of my friends and family members commented positively on the spacious and beautiful interior of Automotive Rhythms top of the line Sorento SXL 2.0T AWD. I even took my sister — D.C. Mayor Muriel Bowser — carpet shopping in the artsy SUV. We easily threaded our way through evening rush hour traffic thanks to the Kia’s responsive 2-liter turbo engine and great visibility. After she made a choice I dropped the center of the 40/20/40 rear seat and slid the Mayor’s magic carpet in the back of the Kia and continued shopping. Check out my colleague Leon Brittain’s review of the 2016 Kia Sorento SXL AWD: Family Focused Fun for a detailed look at the Sorento’s features and capabilities. 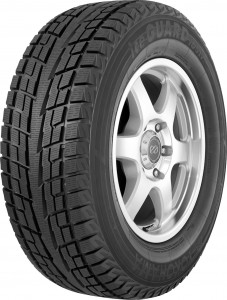 I picked up the Sorento in early February and got to enjoy it for about a month. Although I missed the blizzard of 2016, February served up snow, ice, sub-freezing temperatures and heavy rain. Luckily, my Kia was equipped with Yokohama Tire Corporation’s new iceGuard iG51v winter tires. I used to live in the mountains in Germany years ago where everyone needed a set of summer and winter tires to be safe in that heavy snow region. Back then, winter tires were noisy, rode rough and cornered poorly. The Yokohamas in stark contrast are quiet and ride and corner as well as many all-weather tires. The tires were evaluated during an early morning snow squall by coming to a full stop and then accelerating at full throttle several times with about two inches of snow on the road. The vehicle didn’t spin a tire or break adhesion due to the combination of the iceGuard iG51v winter tires and the Kia’s Dynamax fully adaptive AWD system no matter how hard I accelerated. When braking aggressively on the snow the antilock braking system stopped the vehicle quickly in a straight line with no drama. Furthermore, I found a flooded and frozen over street in a local park – what luck! Someone had already driven through the ice and broken the surface so I could see it was about three inches deep. On the first pass I drove slowly through the ice and water with no issues. On the second pass, I stopped in the middle to see if I had any wheel spin from a standing start. None. The Sorento Dynamax AWD mated with iceGuard iG51v winter tires is a perfect combination for people who live in harsh winter regions.

My times were exciting in the Art Car as I look forward to the next Korean invention from Kia.