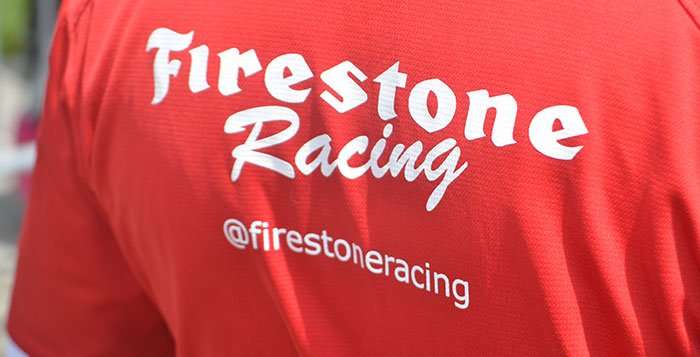 Almost everyone has a list of things they want to do before they kick the proverbial “bucket.”  Visit many countries?  Done that.  Fly an airplane?  I’ve got my wings.

But until May 25, 2014, I had never been to the greatest motorsports event in the world, the Indianapolis 500.  To visit this historic race during the 98th running was an experience I shall never forget.  It probably means a lot to the 400,000 plus folks who joined me at the “Brickyard.”

Race weekend began on Friday, May 23rd with a driver’s reception at the Indianapolis Marriot. Up close and personal were last year’s winner Tony Kanaan, three time winner Helio Castroneves, Graham Rahal, lone female driver Pippa Mann and the rest of the 2014 grid.  Attendees were able to meet the drivers and get photos with them and autographs.  Saturday morning, we had a breakfast meeting with a legend of Indy racing, Mario Andretti.  For those who don’t know, the Andretti family is automotive royalty.  Mario is a spokesperson for our race host Firestone, and does track testing for the storied tire brand (Firestone is part of the Bridgestone/Firestone tire family). And Mario is super, super cool.  He joked about my 6’9” frame, as he is typical race car driver short (5’7”).  What a treat to hear of his exploits at Indy, including him describing his 1969 victory, and how proud he is of his sons and grandsons who keep the Andretti racing legend alive.  More on son Michael, now a team owner, and grandson Marco later, as he was in the field of 33 for this year’s race.  After chatting with racing history, we headed to the Brickyard to visit team garages and witness tire preparation for the company that’s in its 13th season of exclusively providing tires for the world’s greatest race, Firestone. 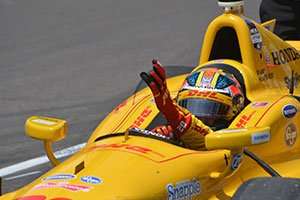 Firestone sells more than 14 million tires each year, many of them original equipment fittings for myriad manufacturers, including BMW, Chevrolet, Mercedes-Benz, Honda, Subaru and others.  Their success at Indy spurred Firestone founder Harvey Firestone to coin the phrase, “win on Sunday, sell on Monday.” And Firestone continues to use motorsports as the ultimate public laboratory, testing and perfecting newer and better technologies that improve everyday consumer tires.

In the Firestone Garage, technicians were preparing the special “Super Speedway” tires used for the 500.  Each Indy racing team gets 33 sets of tires from Firestone each month under a special lease program.  For Indy racing, the tires are mounted on special O.Z. Racing wheels by Firestone, giving each team the exact same spec tires for each race.  Firestone has several formulations for racing depending on the type of track.

After witnessing how the tires are prepped, we heard from Stu Crum, president, Bridgestone Retail Operations who shared Bridgestone/Firestone’s goal by 2020 to be a tire retailer respected like Nordstrom and Starbucks.  He didn’t elaborate on how they hope to accomplish this, but you better believe excellent quality control and customer service are high on the “must-do” list.

We then heard an enthusiastic presentation from Michael Martini, president, OE Division, Bridgestone Americas Tire Operations who stressed the importance of retaining customers, keeping them loyal to the brand when OE tires wear out.

And since all 33 entrants rolled on Firestone Tires, we had our choice of team garages to visit. We visited the Team Verizon Penske Garage of Juan Pablo Montoya, and also that of Penske Team Pennzoil’s Helio Castroneves. Both team’s cars were in various states of undress, with each component closely tested and scrutinized to withstand the rigors of an all-out 500 mile race. 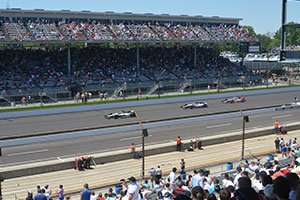 Then, Mari Hulman George, teamed with Jim Neighbors to say those famous words: “Lady and Gentlemen (only one female driver in the 2014 field), start your engines!” Historical footnote: George is the daughter of former Indianapolis Motor Speedway owners Tony and Mary Hulman, who purchased the floundering track in 1945, and raised the standard of racing there to where it is now the largest sporting event in the world. By the way, it’s called the Brickyard because the racing surface used to be all brick, and it took 3.2 million ten pound bricks to pave the two-mile oval. Now, just a three foot wide section of brick remains, the so-called “Yard of Bricks.”  It’s tradition to kiss the bricks if you are lucky enough to gain track access before the big race.

Dallas Mavericks owner Mark Cuban was the celebrity Race Starter, and dropped the Green Flag to the roar of attendees, and the roar of 33 Chevy and Honda V6 engines screaming at full throttle.  Oh the cacophony!

For nearly 3/4 of the race, there were no Yellow Flags, indicating and accident or disabled race car on the track.  Well that all changed with several cautions and a brief race stoppage (Red Flag) before Ryan Hunter-Reay outdueled Helio Castroneves on the last lap to claim the second closest victory in 500 history, just .0600 of a second! 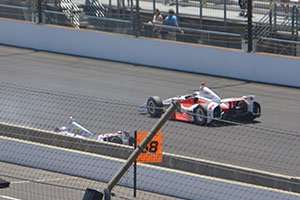 After the race, winning DHL Team Owner Michael Andretti addressed a special gathering of Firestone special guests, where he was happy to have won, but sad that he defeated his own son Marco, who led the race before finishing third. We then got a special treat when Hunter-Reay joined us and thanked engine builder Honda for a reliable powerplant and Firestone for “remarkable tires.” Firestone equipped cars have won the 500 65 times in the race’s 98 year history. He then talked about the danger of racing and how before each race he says a prayer that he will see his wife and young son again. Hunter-Reay’s 17 month-old son joined him on the podium pre-race, and sat on his fanny post race while mom and dad kissed the bricks.  It was cute and touching at the same time, considering those who have died seeking Indy immortality. Hunter-Reay then eschewed the tradition of drinking more milk, as the winner always does at Indy, and instead sprayed the crowd with champagne before having a celebratory swig. Hunter-Reay’s image will now join previous Indy 500 winners on the legendary Borg-Warner Trophy.

I don’t care if you are into racing or not.  The Indy 500 has so many events surrounding it — concerts, parades, amusements and more – so much that there’s something for everyone in the family to enjoy, from toddler to grandma and grandpa.

Do add the Indianapolis 500 to your own Bucket List!

PrevPreviousBMW i8: A Star is Born
Next2014 North American Ferrari Challenge Series: Legend of a Prancing HorseNext