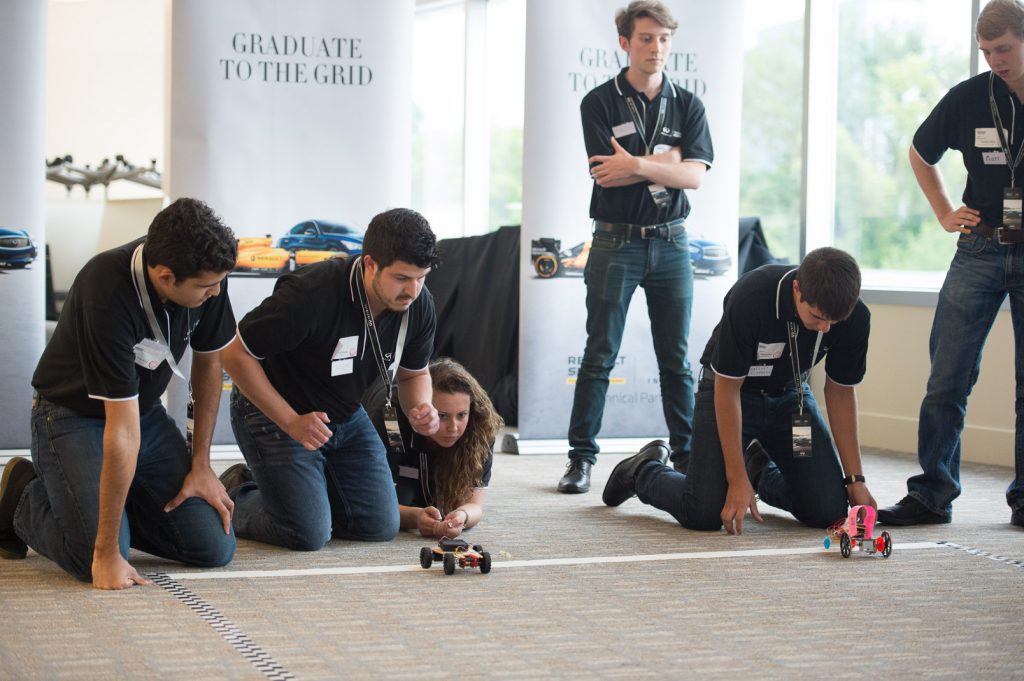 A university student from the United States has been awarded the career opportunity of a lifetime in Formula One, as Caitlin Bunt is confirmed as the US winner of the INFINITI Engineering Academy.

Beating nine other finalists from around the United States, an intense shootout event at Infiniti’s US Headquarters in Nashville saw 24-year-old Caitlin Bunt from Rockford, Illinois become the first ever female winner of the Academy.

Bunt will spend six months working at the Formula One team’s headquarters in Enstone and six months working at INFINITI’s European Technical Center in Cranfield. With F1 Technology more relevant to the automotive industry than ever, she will play a key role in the ongoing transfer of technical knowledge and expertise between the Renault Sport Formula One Team and INFINITI.

The INFINITI Engineering Academy, now in its third year, is a one-of-a-kind global search for the world’s best up-and-coming engineers. For 2016 seven placements have been made available, with one winner chosen from the USA, Canada, Mexico, Europe incl. Russia, United Arab Emirates, China and Asia–Pacific.

This unique automotive-to-motorsport training program for brilliant young engineers, possible thanks to INFINITI’s Technical Partnership with the Renault Sport Formula One Team, has attracted 4,108 registrations from 44 different countries. A number of previous winners have gone on to secure full-time careers in the automotive and motorsport industries.

After a series of interviews, ten US finalists were invited to attend the selection event in Nashville. They were put through their paces in a structured assessment day by a panel of judges from INFINITI and Renault Sport Racing.

Commenting on her win, Bunt said: “I’m ecstatic! I’m still processing it all; it is pretty surreal. I’m so excited for the opportunities ahead and the chance to work with Infiniti and Renault Sport Racing. It has always been a dream of mine to work at the pinnacle of motorsport.

“I wouldn’t be an engineer without the influence of my Dad. I got my first experiences in Motorsport working with him. I know he’ll be proud and that all of my family will be so excited to hear this news!”

Tommaso Volpe, Global Director, INFINITI Motorsport, commented: “The extraordinary level of interest in this year’s INFINITI Engineering Academy has been absolutely fantastic. Students have seen the accomplishments of our Academies graduates, who have gone on to forge successful careers in the automotive industry. This has meant that more students than ever want to use the Academy to gain vital engineering experience and launch their own careers as Caitlin will now have the chance to do.

“With F1 becoming more and more relevant to the automotive industry and an increased focus of the placements this year being on the road car development, we are training a new generation of engineers who will play a key role in the crossover between the two industries”, concluded Volpe.

Biggest positive impact in life: My parents, but particularly my Dad who has been a huge influence in my move towards a career in engineering

Most looking forward to about living/working in the UK: The chance to explore all of the historic cities

Greatest strength: I think my communication skills serve me well and helped me to win the Academy

About the INFINITI Engineering Academy:

The INFINITI Engineering Academy is INFINITI’s global search for the best and brightest engineering talent to work at INFINITI Motor Company and the Renault Sport Formula One™ Team.

In an era where automotive and Formula One™ technologies are growing ever closer, the Academy offers a unique opportunity to train young talents across the two industries. This is the third year for the academy and, with the involvement of our Renault-Nissan Alliance Partner, promises to be more exciting than ever.

The Academy offers seven students a unique opportunity to secure a once in a lifetime work placement. Selected students will go through an integrated training and mentoring programme with world leading engineers. The placement includes return travel to the UK, shared accommodation, a shared INFINITI premium executive vehicle, full salary and all necessary employment processing and permits.