Lamborghini Makes History at the 24 Hours of Daytona 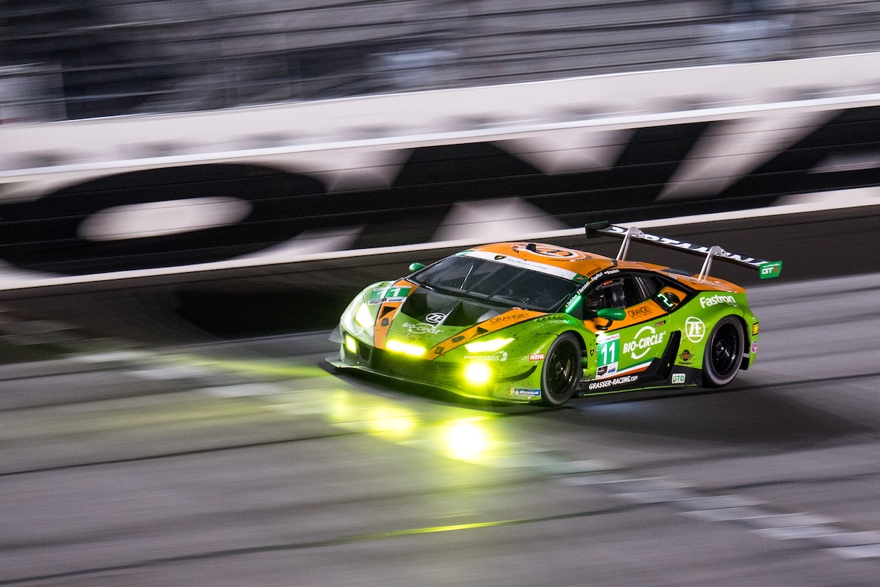 Two red flag stoppages could not stop Lamborghini taking its second successive victory in the Rolex 24 Hours of Daytona – round one of the WeatherTech Sportscar Championship season, thus becoming the first manufacturer to do so since the GTD class was introduced to the legendary race.
Despite dropping out of the top ten with a puncture four hours from the finish, GRT Grasser Racing claimed victory with Mirko Bortolotti, Rolf Ineichen, Rick Breukers and Christian Engelhart aboard the #11 Huracán GT3 Evo. As the race started at 14:35 Eastern Time, the #11 with Ineichen at the wheel made a strong start, leaping from fifth on the grid to run third early on after passing the #46 Ebimotors Huracán GT3 Evo of Giacamo Altoé.
The #11 held the lead in GTD before receiving a three-minute and 40-second stop and hold penalty for disobeying the full course caution wave-by procedure. Breukers dropped to 16th in GTD but made up a place at the unfortunate expense of Emanuele Busnelli, who was forced to bring the #46 into the pits with a technical issue.
Breukers was back in contention by the end of the seventh hour before handing over to Lamborghini Factory driver Mirko Bortolotti, who consolidated fourth position in the #11 GRT. The Italian battled hard with the leading Porsche and Mercedes to run fifth approaching half-distance.
The #48 Paul Miller Racing Huracán GT3 Evo started from last but made great progress in the opening hours to gain five positions by the time Andrea Calderelli took over the commands. Calderelli headed Bortolotti in fourth position at the end of the ninth hour. Heavy rain during the night continued in the morning, forcing the red flags to come out. Shortly before the race was halted, there was more heartbreak for the #46 Ebimotors Huracán as Taylor Proto was forced to retire after a collision with a Porsche.
At the same time, an oil leak sustained after contact prematurely ended the #48 car of Caldarelli, Corey Lewis, Bryan Sellers and Ryan Hardvick. After the lengthy red flag, action finally resumed with Bortolotti holding third place at the restart, before suffering a puncture following contact between the two GTLM leaders at the first corner.
The #11, now with Engelhart at the wheel, dropped as low as 11th in GTD but made a superb recovery to claim victory when the race was stopped again, this time permanently.
Stefano Domenicali, CEO of Automobili Lamborghini, said: “This is a historic victory for Lamborghini, a success which has rewarded the hard work of the many women and men who do their best to our company the best every day! Last year’s success was incredible, but this year will remain in the motorsport history books.”
The #7 Magnus Racing Huracán GT3 Evo (Spencer Pumpelly, Marco Mapelli, John Potter, Andy Lally) finished 11th in GTD, while the #47 Precision Performance Motorsport (Linus Lundqvist, Milos Pavlovic, Steve Dunn, Don Yount) closed in P20 after due to a clutch failure.
PrevPrevious2018 Hyundai IONIQ Electric Limited: An Autoganic Delight
Next2020 Jaguar F-TYPE Checkered Flag Limited EditionNext