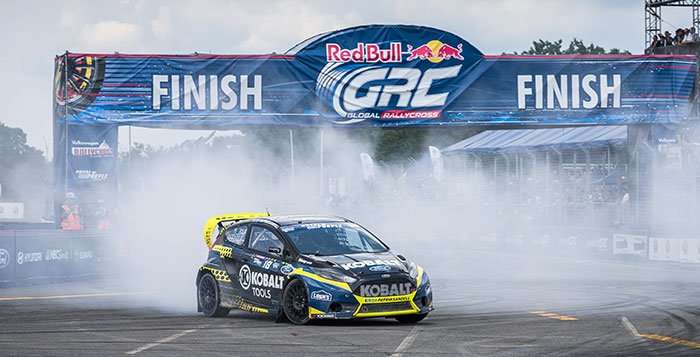 Patrik Sandell took a thrilling victory in Sunday’s Red Bull Global Rallycross event, Volkswagen Rallycross DC, held at RFK Stadium in Washington, DC. In the first motorsports event to take place in the nation’s capital in over a decade, Sandell earned his first Red Bull GRC victory by beating Nelson Piquet Jr. and teammate Joni Wiman to the finish.
“It’s absolutely perfect,” Sandell said after the event. “I felt when we came here that if I could just be smart and not make any mistakes, I could fight for the top. And I knew that the start at the final was so important, so I just tried to focus on that as much as I could. I think I took the start directly on the light, and that made me come off the line so good. That was the key to everything.” 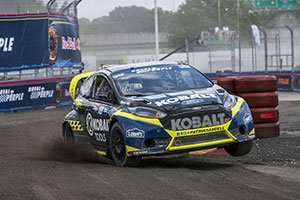 Piquet Jr. took the top seed on Saturday and won both of his heat races, as did Sandell and Wiman. Piquet Jr. and Steve Arpin won the two semifinals, while Tanner Foust earned the victory in the last chance qualifier to make it to his first final of the 2014 season despite an engine change that forced him to miss the first two heat races held on Saturday.
“Everybody gave each other enough space,” said Piquet. “Being teammates, obviously we’re going to respect each other. Obviously if I wasn’t a teammate I would have tried a little harder. But we have to work together, we have to help each other. Between races we all go into each other’s trailers and look at each other’s data, we look at videos, and we are a team. We have to act like that, and on the racetrack it shows.”
Due to a revised false start penalty, 11 cars ran in the main event of a Red Bull GRC event for the first time in series history. All 11 drivers made it through to the end of the event.
In GRC Lites, Mitchell DeJong earned his second consecutive victory over Kevin Eriksson and Nelson Piquet Jr. in an eight-car, 10-lap dash. DeJong held the advantage on Eriksson at the start and extended a lead on his OMSE teammate as Eriksson and Piquet Jr. fought for second place. 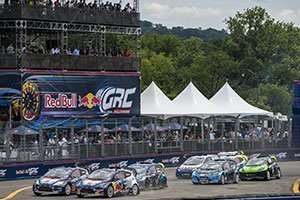 Designed to produce the fastest and most exciting racing in motorsports, Red Bull Global Rallycross pits small production-based cars against each other in door-to-door racing featuring dirt, asphalt, and table-top jumps. With enhanced engineering and safety features, the cars produce 600 horsepower and can accelerate from 0-60 miles per hour in less than two seconds, and can also withstand 70-foot jumps and other vehicle contact. For more information visit www.RedBullGlobalRallycross.com.