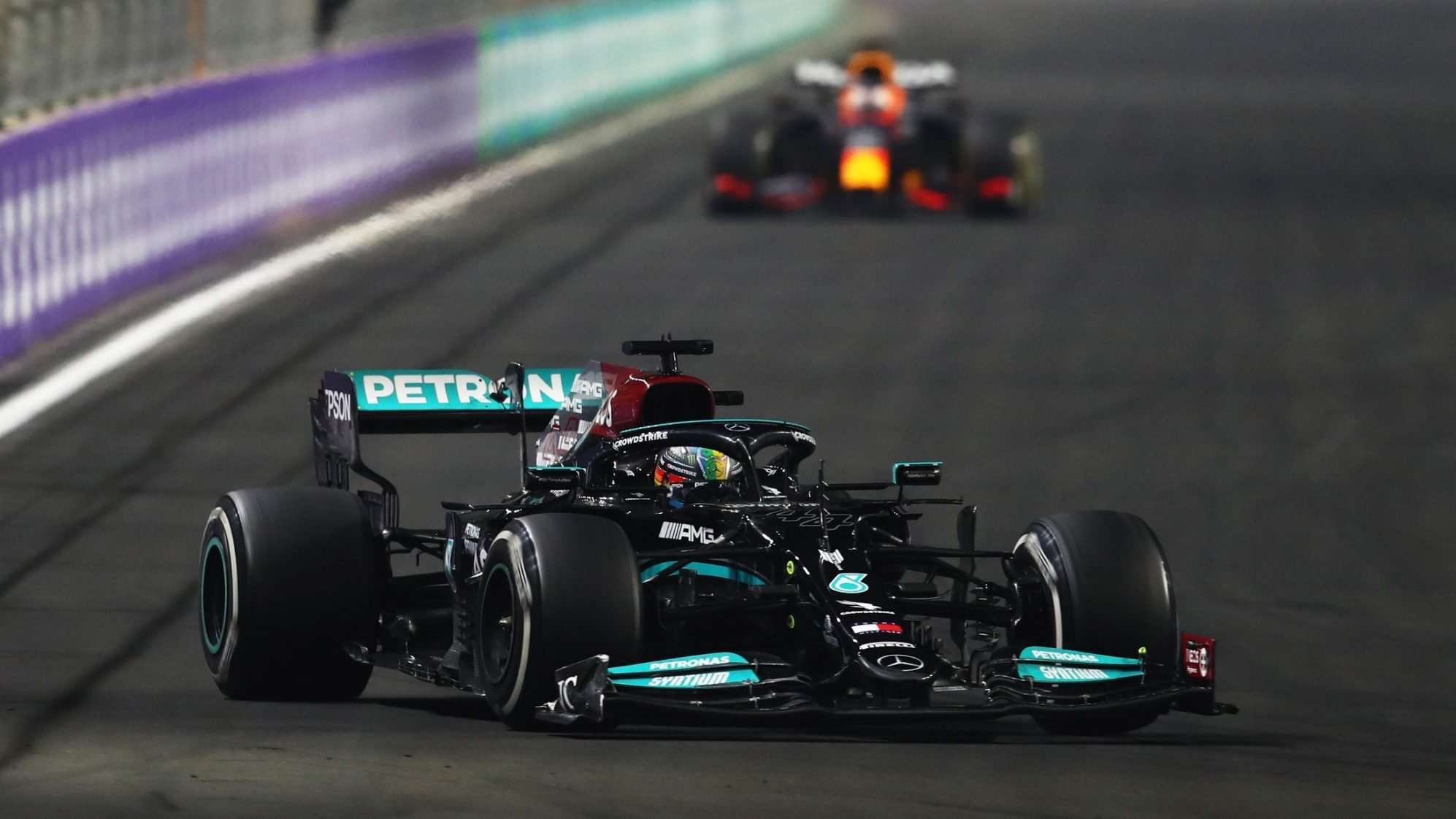 In the evening heat of the brand-new track in Jeddah, Saudi Arabia, the F1 Kings-Lewis Hamilton and Max Verstappen, dueled in the wildest F1 race I’ve ever seen in my many years following the open wheel sport.

Race start was terrific. The AMG Petronas pair, Hamilton and Bottas, started on Pole and in P2, respectively. Max Verstappen started in P3 and his usual quick start was foiled by some stout defense by Bottas, who shielded teammate Hamilton very well. After passing P4 Charles LeClerc, P5’s Sergio Perez (Red Bull)  locked his brakes in the first turn, where he was almost hit Red Bull teammate Verstappen in the rear. What a disaster that would have been. LeClerc recovered to regain P3.

On lap 3, Hamilton and Bottas were setting a blistering pace, with them swapping Fastest Lap times between laps 3-6. On Lap 6, Bottas asked his team to have Hamilton “get on it,” to increase the gap between the two, thereby decreasing turbulence from “dirty air” for Bottas.

By Lap 8, Esteban Ocon (Alfa Romeo) and Daniel Ricciardo (McLaren) had gained 2 and 3 positions, respectively, while Pierre Gasly (AlphaTauri) was down two positions.

On Lap 10, Hass’ Mick Schumacher was the first casualty of the day, crashing into a track safety barrier. Hamilton Bottas and Perez hit the pits, with Verstappen taking over P1. While Hamilton and Bottas came out of the pits in P2 and P3, Perez dropped to P8.

Lap 13, the race was “Red Flagged,” with Verstappen in the lead and having the ability to change tires during the race stoppage, a very controversial situation.

On the lap 15 restart, CHAOS! With Max in P1, Hamilton got a great start and took over P1 and Max pushed Hamilton wide and retook P1, with Ocon taking P2. Meanwhile, Russell, Mazepin and Perez were wiped out in a crazy crash, a function of the speed and blind corners on this brand-new track.

Lap 17 saw a third restart, with Ocon starting P1, Hamilton P2 and Verstappen P3. Verstappen had a perfect restart and eclipsed Hamilton and Ocon for P1, with Lewis in P2.

On a lap in the mid 20s, Kimi Raikkonen and Sebastian Vettel tangled, leaving debris all over the track. A Virtual Safety Car was called on Lap 30 to give race Marshalls time to try to clear the track. “It’s more like an obstacle course than a racetrack,” said a Sky West race announcer after more debris on the track was noted on lap 36, which led to another Virtual Safety Car.

On Lap 37, with DRS enabled, Hamilton attempted to pass Verstappen and was pushed wide, which prompted Hamilton to say “this is guy is crazy.” That led to the weirdest thing I’ve seen, where Max’s team told him to give the P1 position back to Hamilton, and Max inexplicably slowed on the track, with Hamilton plowing into the rear of Verstappen, damaging his wing.

So, Max finally let Hamilton pass, and then promptly retook the lead. Race Stewards determined that Mad Max’s track behavior was worthy of a five-second penalty, and shortly after that, Hamilton retook the lead on Lap 44.

Even with a damaged wing, Hamilton set Fastest Lap times on Laps 47-49.

At the end of the race, NUTS! Not only did Hamilton pull off a stunning win, Bottas claimed P3 on the podium with a thrilling last 100-yard pass on Ocon at the flag.

So, it’s on for all the marbles in the final race of the season in Abu Dhabi, with Verstappen and Hamilton essentially tied for the Driver’s Championship lead.

I’m not posting the current points total, as there may be additional penalties for Verstappen’s Mad Max behavior.

The final race will take place next Sunday, 12/12. 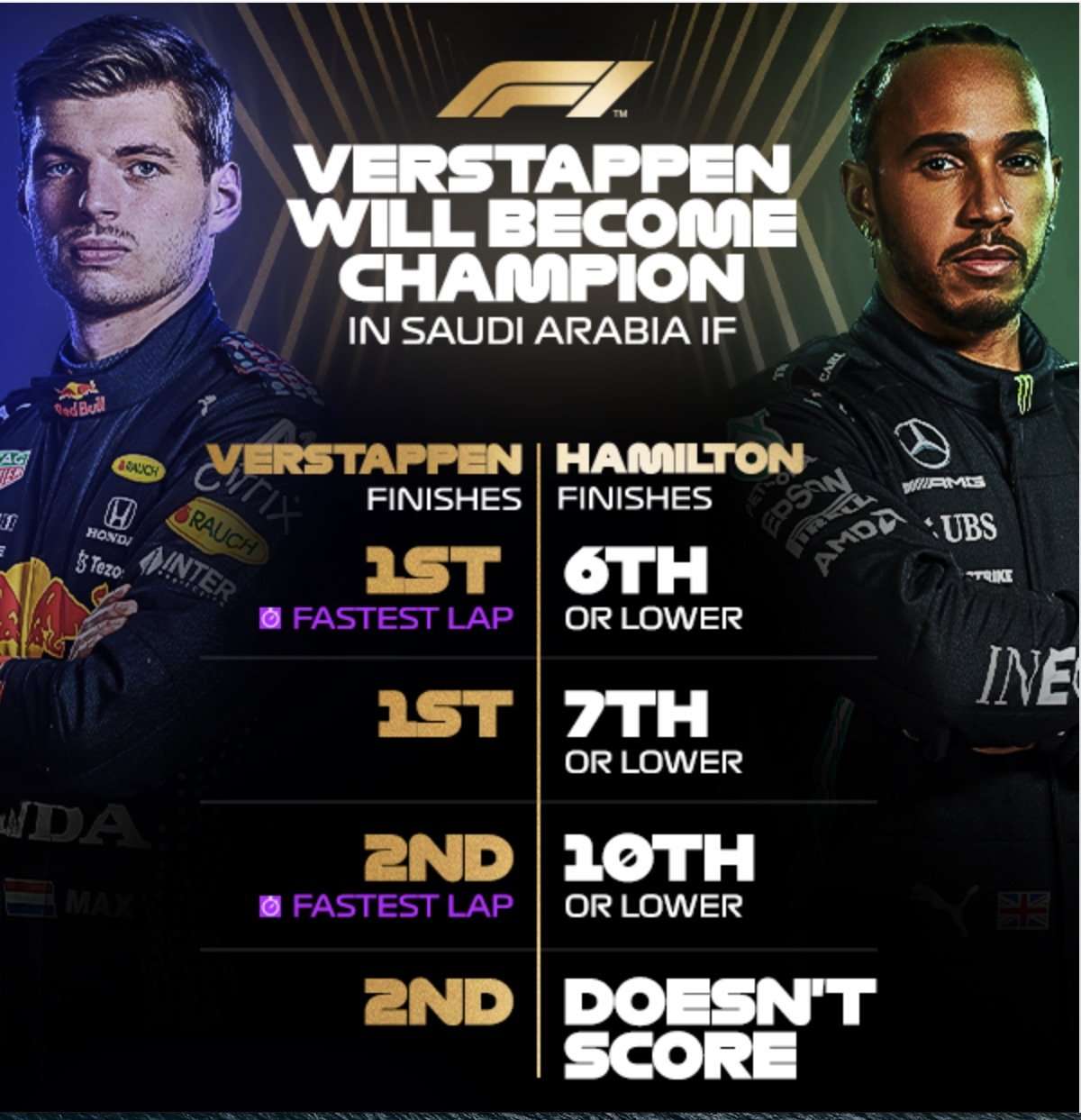