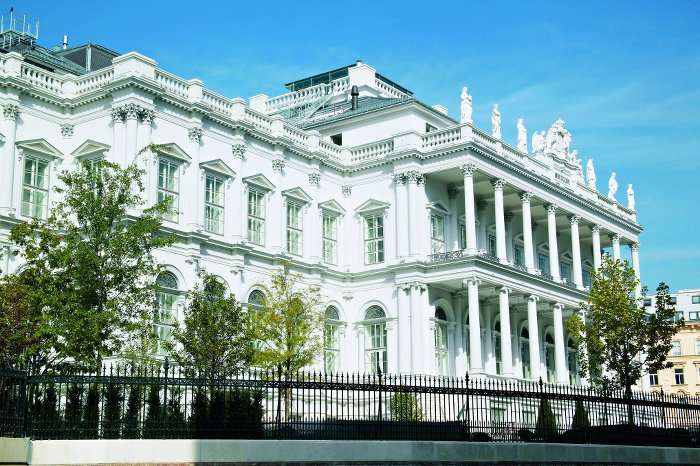 Palais Coburg was built between 1840 and 1845 in a classicist style, commissioned by Ferdinand von Sachsen-Coburg-Gotha. The grand palace was constructed atop a former bastion, the Braunbastei, whose foundations include sections of the city’s fortifications dating from the sixteenth century. In 1997 a private foundation, the POK Pu?hringer Privatstiftung, acquired the building. From 2000 to 2003, after several years of planning, they renovated, revitalized, and rebuilt the structure taking into account all available historical information. The total investments amounted to 85 million euros.

On 7 November 2003, the “new” Palais Coburg opened to the public. Six centuries of Viennese architectural history can thus be experienced in one building. The building’s unique historical fabric is also the base of the Palais’ current use, with its total area of more than 16,000 square meters.

“Preserve the past, shape the future,” is the motto of the POK Pu?hringer Privatstiftung, which has transformed the Palais Coburg into not just any “common accommodation” but a true treasure of a hotel unique on the international scene. Just a few months after opening the Coburg Hotel Residence was classified with five stars and Vienna again had a new hotel in this top category for the first time in a decade. The Palais Coburg is also the only hotel in Vienna to be accepted as member of the renowned Relais & Cha?teaux hotel association. In September 2011 the star-rating committee of the Professional Hotel Association of the Chamber of Commerce placed the Palais Coburg in the highest hotel ranking category. It makes the traditional Palais only the second establishment in Vienna to receive the prized 5-Star Superior classification. The thirty-five suites in the heart of Vienna offer a form of luxury unique in Austria until today, with the full range of services and comforts standard in all outstanding hotels.

The thirty-five highly individual retreats at the Palais Coburg Hotel accommodate the most discriminating tastes: from the elegant Imperial and Palais Suites to the City Suite through to the extravagant Loft and Penthouse Suites. Room sizes vary from 54 to 165 square meters, whereby all accommodations share maximum comfort, utmost privacy, and a vibrant relationship to the house’s history. In keeping with an authentic atmosphere, all of the suites are named for members of the Sachsen-Coburg and Gotha families. Above and beyond the exceptional ambiance, Palais Coburg offers all amenities that a guest could possibly expect from a top-class luxury establishment.

A hotel that is so unique it can hardly be classified alongside other hotels appeals to very special guests. And primarily, our guests are able to appreciate the kind of very special luxury typical of Palais Coburg and discern the value of exquisite, authentic suite designs. Guests who stay here experience the highest possible degree of individuality and service.

Duke Ferdinand Georg August of Saxe- Coburg-Gotha (1785-1851) had the Palais Coburg built between 1840 and 1845 on the Braunbastei, the “Brown Bastion”, in Vienna’s city center. The Palais Coburg has a mighty fortifying wall from the Renaissance as its foundation, and this represents one of its outstanding qualities: while the magnificent façade is a distinctive feature of the cityscape above ground, below the earth fascinating passageways lead into the depths of the city’s history. Beneath the Palais are six centuries of precious architectural fabric: the casemates of the former bastion, a labyrinth of cellars and halls, and remains of the city walls, all of which have been very carefully opened up and preserved.

Immediately following its completion in the year of the revolution, 1848, the Palais presumably stood vacant. But by 1849 – when August of Saxe-Coburg-Koháry and his wife, Princess Clémentine of Orlé- ans, daughter of Louis Philippe, the so-called “Citizen King” moved in – major redesigning projects were already underway. The magnificent ceremonial rooms were furnished with insignias of the French royal dynasty and the coat of arms of the House of Saxe-Coburg. The figures that crown the portico on the Coburgbastei were completed in 1864. The Palais remained in the possession of the family until 1978 and was occupied by Princess Sarah Aurelia of Saxe-Coburg- Koháry and her family until 1994.

The past days of the Palais were not always filled with splendor, and recent decades have taken a heavy toll on this culturally and historically important building. With the comprehensive restoration and revitalization project started in 2000, and a new dedication as a place of culinary and cultural pleasures, of creativity and science, dignity has been returned to the Palais Coburg. Devoted to the common good, the POK Pühringer Privatstiftung is committed to making an important contribution to the preservation of this historically valuable architectural monument.