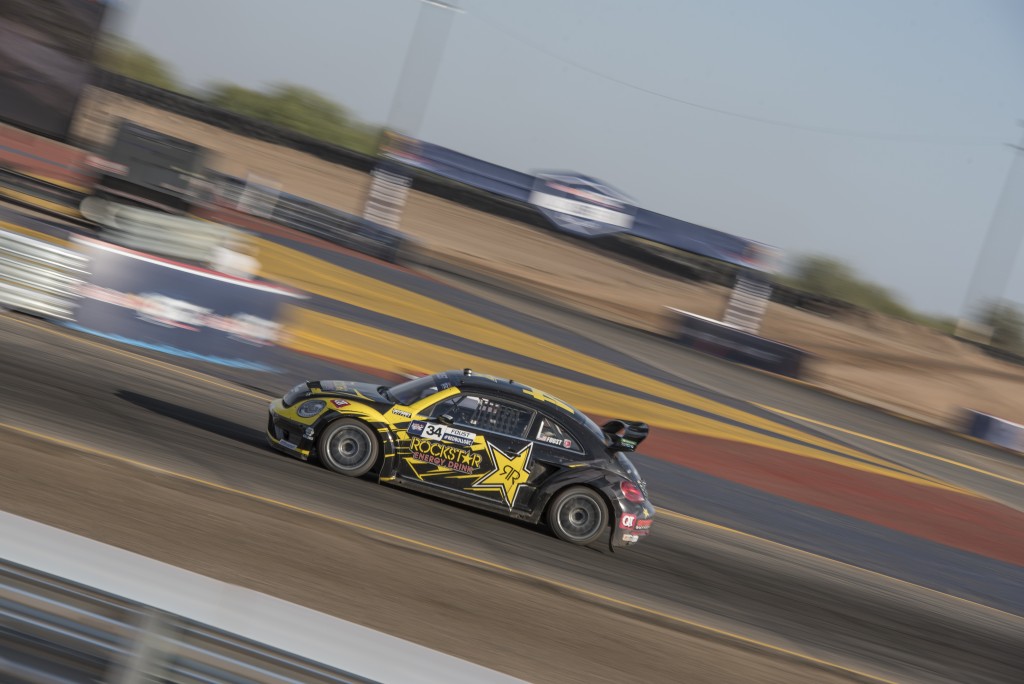 No one could touch Tanner Foust in Phoenix this weekend, as the two-time Global Rallycross champion completed a perfect weekend, setting the quickest time in each qualifying session, winning each heat and semifinal, and both main events in the season-opening doubleheader. His Volkswagen Andretti Rallycross teammate and defending champion, Scott Speed, played his part in the near-perfect weekend for the team, winning all his heat races and semifinals, as well as claiming a second-place finish on Sunday. This enabled him to earn enough points to take second place in the provisional points standings behind Foust.

The team’s incredible results belied the hard work of the Volkswagen Andretti Rallycross team to keep both cars at the front of the pack throughout the weekend. “It’s great that our weekend looked pretty straightforward from the outside,” said Foust on the podium. “Behind the scenes, however, the team absolutely worked their hardest before the semifinal. They did an hour-twenty-minute job in under an hour to change the transmission—we used literally every single minute and still won. That was all Volkswagen Andretti right there, so thank you—that was an epic thrash.”

Scott Speed battled similar issues during the doubleheader, but managed to make the most of his opportunities, hanging on for a fifth-place finish in Saturday’s final, and making it to the second step of the podium on Sunday. “It’s been a great weekend actually,” said Speed. “We just had some gremlins we needed to work through—we missed qualifying and broke in the first final, but to come away with a fifth and second with all the small issues we’ve had is really good.”

The dominance of the Beetle GRC in Phoenix validated the hard work from Volkswagen Andretti Rallycross and their German colleagues at Volkswagen Motorsport during the offseason. “Tanner had a relatively smooth weekend and really showed the field what we had,” enthused Speed. “I think that as the season goes on, you’re looking at the guys who are going to be up on the podium a lot, hopefully.” Foust also heaped praise on the team’s work during the offseason, saying, “A weekend like this is the perfect validation for everyone’s efforts. We’ve made a winning car right off the bat, and I’m extremely proud of the hard work from everyone at Volkswagen Andretti Rallycross to give us such an incredible car to start the season.”

Foust’s two wins make him the winningest driver in series history, breaking a tie he held with teammate Speed before this weekend.  The victories add to Volkswagen’s Red Bull Global Rallycross tally, bringing the manufacturer’s total race triumphs to 11 of 24 events entered and the Beetle GRC’s seventh overall victory in only its second full season of service.

The Volkswagen Andretti Rallycross team will be back in action at another new race venue in two weeks’ time at Dallas. The single race will are live on NBC Sports on Saturday, June 4 at 2:30PM (ET).