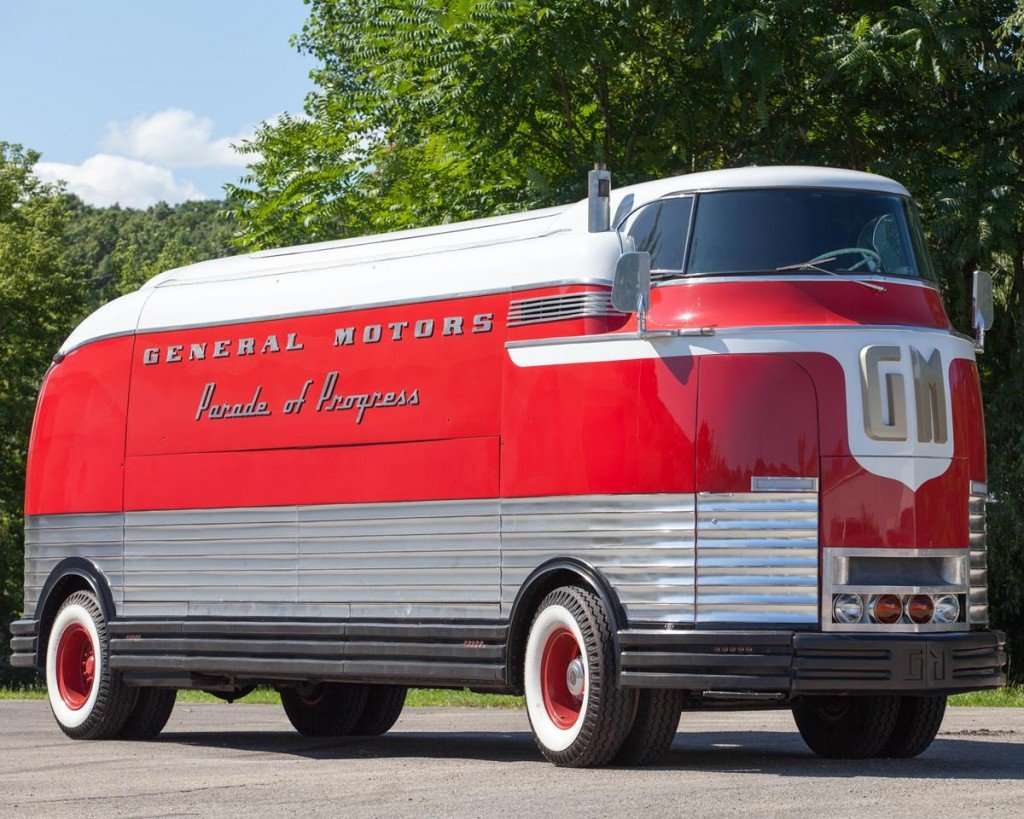 The Historic Vehicle Association (HVA) www.historicvehicle.org announced today that the 1940 General Motors Futurliner No. 10 will become the first truck to be recorded under the Secretary of the Interior’s Standards for Heritage Documentation. The documentation will be part of the HVA’s National Historic Vehicle Register and the Historic American Engineering Record (HAER) that is permanently archived in the Library of Congress.

In 1936, General Motors set out on a tour of the country with eight “Streamliners” and a fleet of support vehicles to, “present, through this Parade of Progress, a picture of America on the move toward better lives for all of us.” Inspired by the 1933 Chicago World’s Fair, the free to the public Parade of Progress featured educational exhibits known as the “circus of science.” The program was revamped in 1940 with 12 new, 33-foot long, 30,000-pound Futurliners. The Parade of Progress traveled to over 250 cities and was viewed by over 12 million people before the show was suspended due to WWII.

Visit YouTube.com ThisCarMattersFilms to learn more about the 1940 General Motors Futurliner. To view images, go to Futurliner No. 10 Images.

Futurliner No. 10 is owned by the National Automotive and Truck Museum of the United States (NATMUS) in Auburn, Indiana. It was donated to NATMUS in 1992 by Joe Bortz. In 1998, Don and Carol Mayton of Zeeland, Michigan decided to take on the vehicle restoration for NATMUS. Mayton gathered a team of more than two dozen to volunteer their efforts. Eight years later, the restoration was complete and they have kept it on the road ever since, traveling across the country to numerous automotive events.

“The National Automotive and Truck Museum of the United States is extremely thankful and appreciative of the many people who were instrumental in the sympathetic restoration of the Futurliner No. 10,” said John Pontius, President of NATMUS. “Special recognition goes to Joe Bortz for donating the vehicle to the museum and to Don Mayton and the dozens of volunteers whose vision, dedication and hard work ensured the originality of the vehicle.”

Over the coming year, the HVA will focus its efforts on documenting additional vehicles and continued work with the U.S. Department of the Interior, Heritage Documentation Programs to refine guidelines and processes to eventually support future public submission. The documentation process includes: (i) a fully referenced narrative and description of the vehicle; (ii) technical drawings of important elements of the vehicle based on 3D laser scan; and (iii) detailed photographs and film negatives for permanent archival in the Library of Congress. These standards for documentation involve the same level of care that has been used within the Historic American Engineering Record to document the Statue of Liberty and the Space Shuttle Discovery. Both domestic and foreign vehicles are considered provided they have significant American history.

Supporting the 1940 Futurliner exhibit, HVA has added two significant concept cars from GM’s 1953 and 1954 Motorama: the Buick Wildcat II and the Cadillac Le Mans The Motorama, which was held annually in conjunction with the New York International Auto Show, was a $5 million traveling exhibit that took place over a six-month period, drawing some 1.5 million visitors along the way. Lead by GM’s design chief, Harley Earl, Motorama featured both the latest models from GM and also concept cars or “dream cars” as Earl called them.

Many of the famed General Motors Motorama “dream cars” traveled with the Futurliners. One of the cars that was exhibited during the Parade’s tours included the 1954 Buick Wildcat II.

The Buick Wildcat II on display with the Futurliners was a sports coupe similar to the Corvette, featuring a fiberglass body, short wheelbases and two-seat layout. Unlike the initial offering of the Corvette, this concept came equipped with a potent V8. The Wildcat II had a 322 C.I.D. Buick nailhead topped with four carburetors. Although this concept car never went into production, it is a hallmark of the innovative and inspiring designs from General Motors during this period. The Buick Wildcat II exhibited here can be found on permanent display at the Sloan Museum in Flint, Michigan.

Cadillac built four sporty Le Mans “dream cars” in 1953 for the GM Motorama program, inspired by Cadillac’s success at the 24 Hours of Le Mans race in 1950. The open-top Le Mans concepts were performance-oriented luxury cars with fiberglass bodies, a two-seat layout and a panoramic windshield. The sleek Cadillac prototypes featured a 115-inch wheelbase, a 331 C.I.D. V8 and Hydra-Matic transmission. The convertibles were considered by GM as “an ideal of motor car enthusiasts – combining elegance with power.” Replete with a padded dash, chrome throughout and a wide assortment of jet age cues, the Le Mans was suited for the glamorous Motorama shows put on across the country by GM in the 1950s. The Le Mans on display is the third example built by Cadillac. It was sold to Mr. Floyd Akers of Capitol Cadillac in Washington, D.C. by GM in 1955. Mr. Akers’ daughter, Ms. Haugerud, drove the car until 1958. This is one of only two known to still exist and the only remaining Cadillac in the original Le Mans configuration.

“Bringing two of the most famous Motorama concept cars to the show adds an exclamation point to our feature presentation of the Futurliner and a wonderful opportunity to celebrate our automotive heritage,” said Gessler. “I believe this is a once-in-a-lifetime experience to see these three magnificent vehicles together under one roof.”