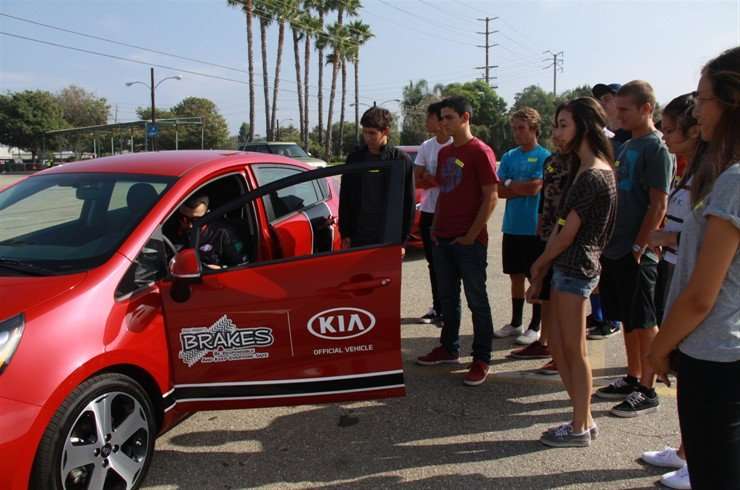 Kia Motors America (KMA) has furthered its commitment to keeping young drivers safe on the road by expanding the company’s partnership with the B.R.A.K.E.S. (Be Responsible And Keep Everyone Safe) Teen Pro-Active Driving School to help the 501(c)(3) charity offer additional classes across the country, increasing its geographic reach and the total number of teens that receive this lifesaving training.
In conjunction with National Teen Driver Safety Week, Oct. 19-25, Kia and B.R.A.K.E.S. will provide an estimated 200 teens and their parents with free, hands-on defensive driving instruction in new Kia vehicles.  These 200 students will add to the more than 12,000 teens that have already graduated from B.R.A.K.E.S.’ intensive half-day training, which includes a distracted driving exercise, emergency braking using the anti-lock braking system (ABS), evasive maneuvering and skid-control practice.  Kia is the Official Vehicle and presenting sponsor of the B.R.A.K.E.S. Teen Pro-Active Driving School.
“Kia joined forces with B.R.A.K.E.S. more than a year ago because we believe in (founder) Doug Herbert and the organization, and we support their mission to save lives through driver education,” said Michael Sprague, executive vice president of sales and marketing, KMA.  “We’ve supplied the school with a fleet of new Kia vehicles, and we’re expanding our commitment to help scale up this valuable effort.  With traffic accidents still the leading cause of fatalities among teens 14 to 18 years of age, we’re determined to help B.R.A.K.E.S. maximize their impact in communities across the country.”
Sobering statistics reveal that drivers 16 to 19 years of age have the highest average annual crash and traffic violation rates among all age groups2, and the chance of having at least one crash in the first three years of driving is 89.2 percent3.  Accidents are the leading cause of death for teens in the U.S.
“Kia’s partnership has been instrumental in raising awareness with teens and parents about the importance of responsible driving and the benefits of hands on training behind the wheel,” said Doug Herbert, National Hot Rod Association (NHRA) Top Fuel drag racer and founder of B.R.A.K.E.S. “Our training is designed to prepare teens for the situations that they will inevitably face at some point as drivers. Experience with these situations in a controlled environment helps them make good decisions when they face them on the street. And, of course, we also include classroom lessons and hands-on exercises to impress upon our students just how dangerous distracted driving is.”
B.R.A.K.E.S. has provided free safe-driving instruction for more than 12,000 students in 10 states across America.  The school offers nearly four hours of hands-on training with a low three-to-one student-to-teacher ratio to ensure personal attention, and parents participate in the courses alongside their teens to ensure proper driving techniques are reinforced following the session.  Teens with parents who set driving rules and monitor their activities are half as likely to crash, 71 percent less likely to drive intoxicated, 30 percent less likely to use a cell phone when driving and less inclined to speed4.
Upcoming training dates include Oct. 25 – 26 in Concord, North Carolina; Nov. 1 – 2 in Ocoee, Florida; Nov. 15 – 16 in Concord, North Carolina; Dec. 6 – 7 in Concord, North Carolina, and Dec. 20 – 21 in Pomona, California.  Additional schools are expected to be added soon.
The B.R.A.K.E.S. Training Curriculum includes the following –

About Kia Motors America
Kia Motors America (KMA) is the marketing and distribution arm of Kia Motors Corporation based in Seoul, South Korea.  KMA proudly serves as the “Official Automotive Partner” of the NBA and LPGA and surpassed the 500,000 annual sales mark for the second consecutive year in 2013 following the launch of seven all-new or significantly redesigned vehicles.   KMA offers a complete line of vehicles, including the rear-drive K900** flagship sedan, Cadenza premium sedan, Sorento CUV, Soul urban passenger vehicle, Sportage compact CUV, Optima midsize sedan, Optima Hybrid, the Forte compact sedan, Forte5 and Forte Koup, Rio and Rio 5-door subcompacts and the Sedona midsize multi-purpose vehicle, through a network of more than 765 dealers across the United States.  Kia’s U.S. manufacturing plant in West Point, Georgia, builds the Optima* and Sorento* and is responsible for the creation of more than 14,000 plant and supplier jobs.
Information about KMA and its full vehicle line-up is available at www.kia.com. For media information, including photography, visit www.kiamedia.com.  To receive custom email notifications for press releases the moment they are published, subscribe at www.kiamedia.com/us/en/newsalert.

fe), is a 501(c)(3) non-profit organization founded by NHRA Mello Yellow Series Top Fuel drag racer Doug Herbert in memory of his two sons, Jon and James, who were tragically killed in a car accident.  The B.R.A.K.E.S. Teen Pro-Active Driving School is a free, defensive driving program.  By training and educating teenage drivers and their parents, the program aims to promote safe driving in an attempt to prevent injuries and save lives. To volunteer, obtain more information or donate please visit www.putonthebrakes.org.