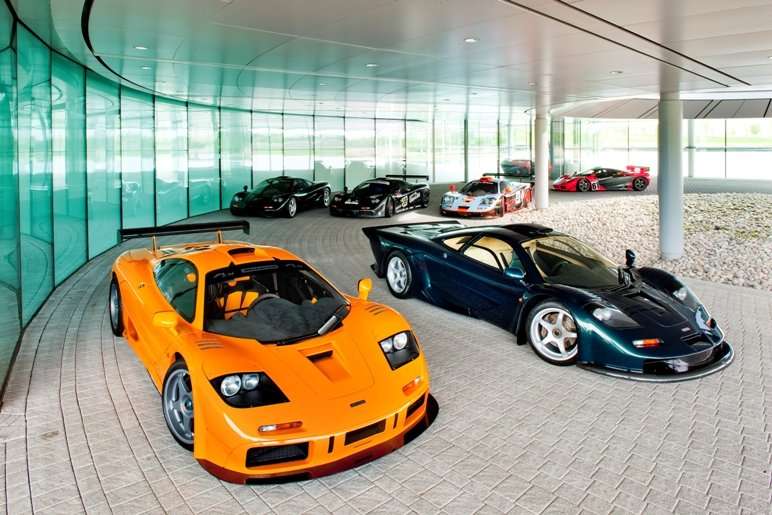 In 1988, McLaren took the decision to expand from Formula One and design and build “the finest sports car the world had ever seen”. In March 1990 the team that was to create the F1 came together for the first time.  In its 20th anniversary year, the McLaren F1 is considered by most people to be one of the greatest cars of all time.   Its exclusivity, technical innovation, racing provenance, revolutionary packaging and extraordinary driving experience have made it an icon.

Just two years later, the McLaren F1 road car was launched to the world on 28th May 1992 in Monaco, with the first production car delivered to its proud owner in December 1993.

The F1 defines the McLaren road car DNA
McLaren is a carbon pioneer. The McLaren Formula 1 team was the first team in Formula 1 to use a carbon fibre chassis in 1981. Nine years on, these Formula 1 techniques were developed to create the carbon monocoque for the McLaren F1: the resulting structure weighed just 100kg whilst offering the highest levels of strength and safety. The bare carbon fibre passenger doors weighed just 7 kg each (which included the weight of the side intrusion beam).

The F1 bristles with innovative design. The central driving position, which ensures superb visibility and no compromise on control positions for the driver; the pannier side lockers providing unprecedented levels of luggage capacity in a car of this type; the patented suspension system to provide both control and ride quality.

In October 2008, a delivery mileage F1 was sold at auction for £2.53 million, underlining the F1’s status as one of the great motoring icons.

Taking a road car to the track
In 1994, after pressure from owners, McLaren developed a racing version of the F1 road car to run in the FIA GT1 category in the 1995 season. Despite a design and development period of just 3 months, the F1 GTR swept all before it, winning not only the 1995 GT1 Championship, but also the 24 Heures du Mans on its debut. McLaren not only won, but dominated the rain-soaked endurance race, finishing in 1st, 3rd, 4th, 5th and 13th places.

The Le Mans winning F1 GTR was piloted by J.J. Lehto, Yannick Dalmas and Masanori Sekiya.  Lehto’s performance through the night on a treacherous circuit has been hailed as one of the great racing performances of all time, taking up to 10 seconds a lap off the cars in front of him. The winning car is proudly displayed at the McLaren Technology Centre in exactly the condition that it finished Le Mans in 1995.

Thus the F1 GTR secured for McLaren a unique position in motor racing history, as the only manufacturer to win the Formula 1 World Championship, the Indianapolis 500 and the Le Mans 24 Hours.

McLaren decided to celebrate the extraordinary result at Le Mans by creating 5 F1 LM road cars, one for each F1 that finished this most grueling of races. Launched in McLaren Orange, as used on Bruce McLaren’s race cars the 1960s and 70s, and with a derestricted race engine, the LM is not only the most powerful of all F1 variants, but also the most valuable. Formula 1 fans will recognize this as the car which Lewis Hamilton has set his heart on owning.

In 1997, the final iteration of the F1 road car project was built. The F1 GT was built solely to fulfil the new homologation rules for the 1997 GTR race car, of which 10 examples were produced in the same year. Both the GT road car and the 1997 GTR race cars became known as the ‘Longtail’, because of the longer front and rear overhangs for improved downforce when racing. Although McLaren only had to build one car for homologation purposes, two more were built following requests from existing F1 owners.

In 1998, with a total of 106 of all variants built and its production run complete, the McLaren F1 went on to achieve its greatest feat outside competitive motorsport.  McLaren development and race driver Andy Wallace took XP5, the fifth and final prototype F1 with some 45,000 hard test miles on the clock, to the Ehra-Lessien proving ground in Germany.  It was here on 31st March 1998 that the howling V12 propelled him to an amazing 240.1mph. Over 12 years later, this remains a world record for a naturally aspirated production car.

Back to the F1 future
On 27th April 2010, McLaren Automotive celebrated the 20th Anniversary of the start of the F1 programme by inviting F1 owners past and present to a celebration dinner at the McLaren Technology Centre in Woking, England. The following day, after an insight into McLaren Automotive’s exciting plans for a future range of high performance sports cars, the owners were treated to a display of  21 McLaren F1 road and race cars, the largest number of F1 cars ever assembled in one place.

Ron Dennis, McLaren Automotive Executive Chairman, said:
“The F1 is a technological tour-de-force and a real triumph in terms of packaging and design.  Whether endurance racing or on road, it is supremely fast, agile and yet comfortable. Its styling is enduring and will never fade. I enjoy driving mine more today than ever before because I find its technical purity highly satisfying; the F1 remains one of McLaren’s proudest achievements.”

With the launch of McLaren Automotive as a new car company announced in March 2010, the company begins production planning for an entire range of high performance sports, designed and built in-house by McLaren. The first in this range will be the MP4-12C.

The 12C shares much of the design philosophy that was applied to the McLaren F1. Starting with the new car’s MonoCell, a one-piece carbon fibre chassis that is stiff, light and ensures occupant safety, every component has been designed to ensure the car is lightweight, nimble and able to deliver ultimate performance.  When the 12C launches in 2011, it will be the first in the ‘core’ sports car sector to offer a carbon chassis, and the first road car ever with a one-piece, moulded carbon chassis.

From the outset, the 12C has been ‘designed around the driver’.  Outstanding aerodynamic efficiency and bespoke technologies including Proactive Chassis Control, Seamless Shift dual-clutch Gearbox (SSG), Brake Steer and the 12C’s unique Airbrake feature in a car which has been developed using Formula 1 simulator technology.   The new high performance sports car from McLaren will be sold initially through 35 retailers in 19 different countries around the world from Spring 2011.

McLaren’s celebration of the 20th anniversary of the F1 will continue throughout the year.  McLaren enthusiasts will have the opportunity to see both the F1 and 12C together at this summer’s Goodwood Festival of Speed, which takes place at the famous English motorsport venue from 2-4 July 2010.

Technical specifications of each McLaren F1 derivative are detailed below.