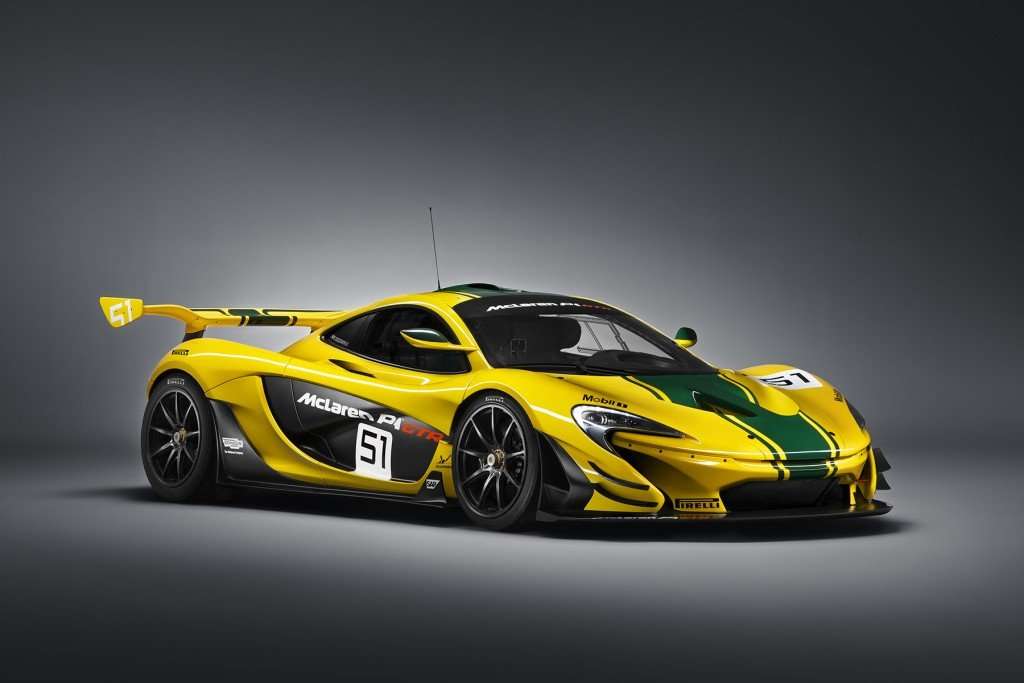 The track dedicated, 986bhp (1000PS) McLaren P1 GTR will debut at the 85th International Geneva Motor Show in limited production form with only minor modifications to the Design Concept presented just six months ago.  The most noticeable change is the livery that the Geneva show car will be sporting.  It is one which will be available to the fortunate few who will be joining the McLaren P1 GTR Driver Program that kicks off at the Circuit de Catalunya in Spain later this year. The design is homage to the yellow and green McLaren F1 GTR, chassis #06R, which has claimed its own place in history as one of the five F1 GTRs that dominated the 24 Hours of Le Mans in the historic debut by McLaren 20 years ago.

From design concept to the track

The McLaren P1 GTR has completed an extensive and intense testing schedule across the world following the unveil of the Design Concept at the Pebble Beach Concours d’Elegance last summer. This has produced enhancements to the original design to optimize aerodynamic performance and cooling.

The front track is 80mm wider than the road-going McLaren P1™ and with its aggressively profiled front splitter, the also car sits 50mm lower to the ground on center-locking 19-inch motorsport alloy wheels shod with Pirelli slick tires. The lower bodywork is trimmed with a sleek aerodynamic blade as previewed on the design concept, which cleans the flow of air along the car’s flanks.

The lightweight windscreen from the McLaren P1 road car, measuring just 3.2mm thick, has been retained, while the side windows are now motorsport-specification polycarbonate with a sliding ‘ticket window’ on the driver’s side. The chemically toughened glass panels in the roof have been replaced with carbon fiber panels to give the cabin a more enclosed, cocooned environment, as has the engine bay cover. The weight saving measures on the McLaren P1™ GTR combine to strip out 110 lbs (50kg) over the road-going model.

The rear of the track-only model is dominated, in contrast to the road-going McLaren P1, by the presence of a fixed-height wing which sits more than 400mm above the sculpted rear bodywork – an increase of over 100mm of the adjustable wing on the road car.  Working in conjunction with the front-mounted aerodynamic flaps ahead of the front wheels, the rear wing helps to increase downforce levels by more than 10 percent – meaning up to 1,455 lbs (660kg) at 150 mph. Mounted on light weight carbon fiber pylon supports, the wing retains the DRS (Drag Reduction System) of the road car, which trims the pitch from 32° to 0° at the push of the button on the steering wheel. Another bold and differentiating feature at the rear are the large twin exhaust pipes, formed from an Inconel and titanium alloy. This system saves in excess of 14 lbs (6.5kg) over the already light road-going system. 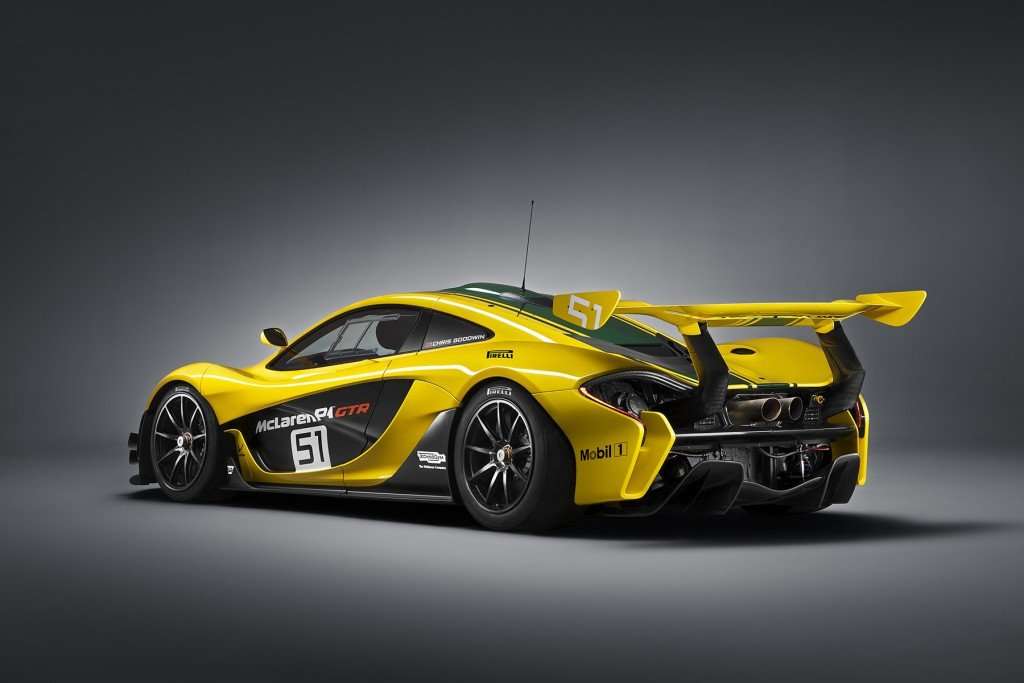 Significant updates and modifications to the IPAS powertrain have been made beneath the ‘shrinkwrapped’ carbon fiber bodywork. At its heart, the McLaren P1 GTR seamlessly integrates the 3.8-liter twin-turbo V8 gasoline engine with an enhanced lightweight electric motor. Combined, these powerplants generate 986bhp (1,000PS); 789bhp (800PS) is produced by the gasoline engine, coupled to 197bhp (200PS) available immediately from the electric motor.

The powertrain has been thoroughly revised for optimum performance on track, with key components replaced with motorsport-developed parts, more suited to the sustained high speed running the cars will be subjected to. In addition to this, features within the powertrain of the McLaren P1 designed specifically for public highway use have been removed to reduce weight.

McLaren F1 GTR chassis #06R was campaigned successfully throughout the 1995 and 1996 seasons with Mach One Racing, and is one of the longest serving examples of the McLaren F1 GTR in competition. The Harrods-sponsored #51 was famously one of seven McLaren F1 GTRs to compete at the 24 Hours of Le Mans in 1995, and was driven to the final podium position by multiple Le Mans race winner Derek Bell, his son Justin, and Andy Wallace. After this result, the team went on to win the final three races of the BPR Championship.

The following year, the team enjoyed another strong campaign. Oliver Grouillard joined Derek Bell and Andy Wallace in the line-up for the 24 Hours of Le Mans, and finished a commendable sixth. The team also claimed a win at Silverstone in the Global GT Endurance championship.

The first locations for the first McLaren P1 Driver Program have now been confirmed, and will see drivers attend an initial test session at Silverstone, England, followed by the first on-track activity at Circuit de Catalunya in Spain. These events will follow on from individual driver profiling sessions at the McLaren Technology Center. These tailored consultations will include a race seat fitting, a Human Performance Center assessment, and final discussions around the design and livery of each model with McLaren Automotive Design Director Frank Stephenson.  Each driver will also experience the McLaren P1 GTR from the simulator for the first time.

The McLaren P1™ GTR joins the road-going McLaren P1 in the Ultimate Series. This exclusive range prioritizes aerodynamics and outright performance through notable advances in weight reduction, chassis and powertrain engineering and the use of pioneering materials.

McLaren has now established a three tier naming structure of Sports Series, Super Series and Ultimate Series.  The Sports Series is the entry point to McLaren and will make its global debut at the 2015 New York International Auto Show in April. Above this sits the core McLaren Super Series, comprising the 650S, the Asia-only 625C and the recently-announced 675LT which will premiere at the Geneva Motor Show.