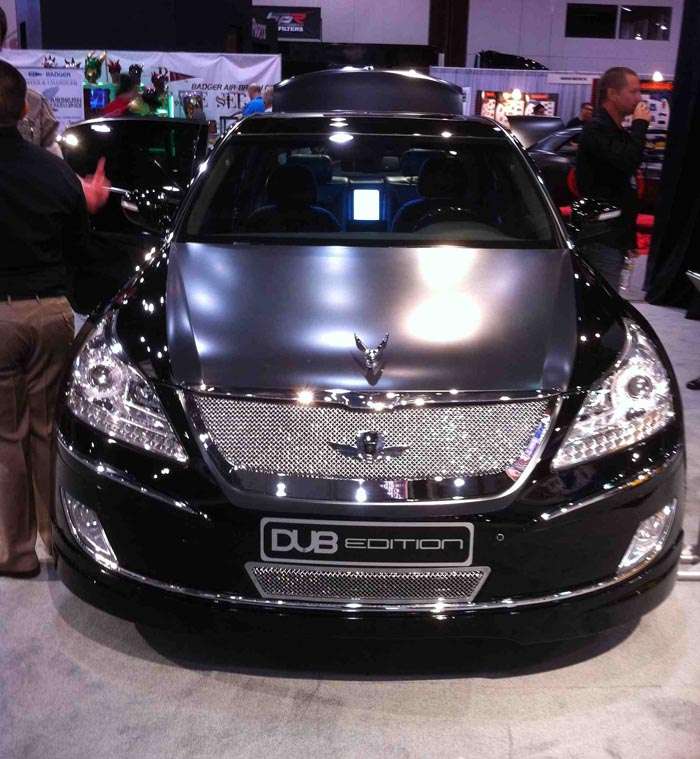 Every year during the first week of November the auto industry gets very exciting. This past week the Automotive Rhythms team had the opportunity to witness a Scion xB resembling a submarine — complete with convex windows and aquatic detailing. We spied a motorcycle with appointments like a seat made of oversized chain and wheels that looked like weapons. We also spent some time drooling over a trio of Hyundai vehicles, each a separate 2011 Equus with accessories that would rival even the most tricked out Bentley, Mercedes or Lexus. But we weren’t at the standard metropolitan auto show…we were knee-deep in aftermarket parts, accessories, technology and bling at the 2010 Specialty Equipment Market Association Show (SEMA Show) in Las Vegas, Nevada.

Spread out over nearly every inch of the Las Vegas Convention Center, and taking up all of the onsite parking and roadways for display cars, smoke shows, drifting competitions and truck jumping, SEMA had it all. From caliper covers, performance lighting and exhaust components to complete kit cars, suspension tech and wheels that make you spin around and take notice, this show was a candy store for anyone who’s ever stepped on a gas pedal or twisted a throttle.

In fact, the show was so extensive that it featured 13 separate trade show sections including Powersports & Utility Vehicles; OEM; Restoration Marketplace; Paint, Body & Equipment; Mobile Electronics & Technology; and Racing & Performance to name a handful. While you’d have to spend every waking hour at this three-day show to properly appreciate all the equipment on hand, we did our best. Here is a brief recap of items we saw and our thoughts on the products. For buyers with one market to service, or enthusiasts looking for a handful of products, the show can be managed. When you go next year we recommend starting out with a good map of the convention hall and a comfortable pair of shoes. Bring extra batteries for your camera and a backpack to carry away the literature and schwag some booths give away. Let’s get into the goods…

Hyundai – At their booth, the Korean car maker showcased a handful of vehicles, but none were as eye-catching as the three fully tricked out Equus luxury sedans. One from Rhys Millen, one from Mummbles Marketing and another from DUB Magazine. These cars had tweaks such as iPads for backseat passengers, multi-speaker sound systems, ostrich-skin seats, window curtains, intricately cut grilles and a lot more.

Chevy’s booth was a serpentine pile of power cords as they had camera crews and electric cars all over the place. They also positioned a number of Camaros and Corvettes in strategic locations to grab your eye and attention. The new Cruze LT was on display in the dead center of the booth and the Volt shared center stage.

Ford made waves by having Funkmaster Flex on hand to talk about the vehicle he designed for Snoop Dogg – a blue and white 2011 Mustang GT. Flex has done work with Ford for a handful of years and reportedly has customized an Explorer, a Fiesta, a Flex and the Taurus SHO. Ford hosted hundreds of people lining their booth because they also got Dogg and Flex to sign autographs for the crowd.

Beyond the usual suspects were hundreds of niche players…

Flash2Pass – a firm that sells kits that allow motorcyclists to operate garage door openers by just flashing their high beam (works for cars too).

Wizard’s Products – just one of about a billion cleaner companies. Detailing vehicles is a high priority these days and Wizards offers polishes, compounds and more

AirBedz – inflatable air mattresses that fit perfectly in the back of a pickup truck.

M55 Bike – a 40MPH electric bike that looks like a mountain bike.

Fist Enterprises – serving up biometric solutions for car starter access, so only the approved person can start a car with their fingerprint.

Crashed Toys – the Internet marketplace for damaged, high-mileage and non-moving vehicles—where you can consign your vehicle for sale or buy one of the vehicles listed.

Talon Motors – exhibiting the Invader three-wheeled vehicle that has a 1300cc engine and a completely futuristic design (top speed around 150MPH).

Spotlight – rechargeable LED lights that fit in your lighter socket so they’re always on hand—the Spotlight version is 25 lumens and the Rescue version throws 96 lumens.

There were also windshield repair companies, wheel dealers (too many to count), lots of tools companies, and a whole section of one hall for lighting options – both in and out of your vehicle.

Unlike most of the auto shows you might have attended, think Detroit, Chicago or New York, SEMA focuses on the nuts and bolts of the automotive world. We found booth staff easy to talk to and it seems that most left the hard-sell talk at home. Further, you can get access to the teams at the big name auto companies too, because the custom world is a whole lot more down-to-earth than some of the representatives that show up for the consumer auto shows.

So, if you’re in the market for aftermarket or if you’re a dealer, shop owner, niche restoration company or even a racer looking to mod your ride, SEMA is the place to be.

Here are some links to the companies mentioned in this article…