Shared History Adds Up to Spectacular Celebration and Extraordinary Cars 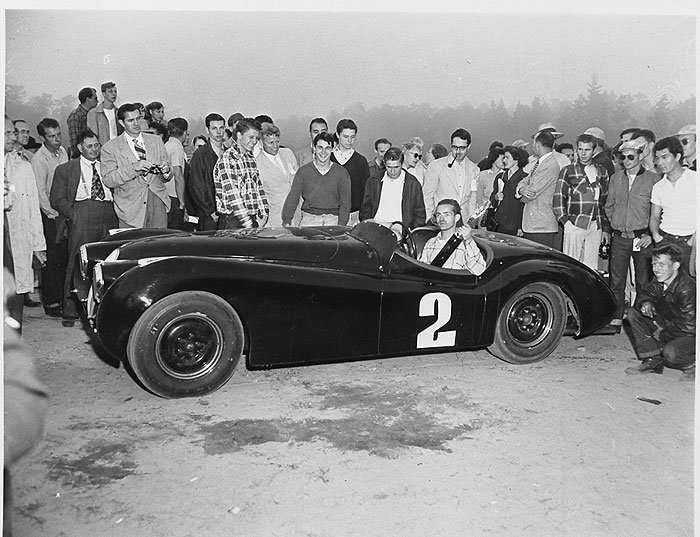 The Pebble Beach Concours began in tandem with the first Pebble Beach Road Race in 1950 when new sports cars were the focus of the burgeoning community of car enthusiasts — and Jaguars, which first appeared in 1935, were all the rage. The marque sought to marry grace with pace, just as the twin events did. Almost immediately, Jaguar, Concours, and Road Race were linked.

“The Pebble Beach Concours came about through the efforts of car enthusiasts, and it has always reflected their passions,” said Concours Chairman Sandra Button, who owns an SS100 Jaguar with her husband, Martin. “Our genuine motorsports heritage gives focus to this event—even today.”

Early publicity posters for both Race and Concours featured Jaguars posed on 17-Mile Drive, and these cars were named Best of Show at three of the first five Concours — in 1951, ’52 and ’54. Phil Hill, who later became the first American to become a Formula One World Drivers Champion, even won the first Pebble Beach Road Race driving a Jaguar XK120.

“The earliest Pebble Beach Concours had a special feeling; it was all new, and everyone participated with great gusto and style,” said Chairman Emeritus Jules “J.” Heumann, who has attended every Pebble Beach Concours to date. “People brought carpets and silver candelabras for picnicking and it wasn’t uncommon to see folks wearing cutaway coats and morning trousers.”

Heumann first competed in the Concours with a 1948 Jaguar Mark IV, winning his class in 1958: “Jaguars were the sports racing car that everyone desired. Jaguar was an important part of the Concours in those early days.”

Flash forward to Aug. 15, 2010, when the 60th anniversary of the Pebble Beach Concours d’Elegance will focus on the 75th anniversary of Jaguar. Jaguar is a featured marque this year, and many historic Jaguars will participate in the competition. Among the cars expected on the famed 18th fairway of Pebble Beach Golf Links are the 1935 SS90 that served as the prototype for the first car named Jaguar and early examples of both the SS1 and the SS100. Also on hand will be several remarkable race cars, including the first C-type sent to the U.S. — and campaigned by Phil Hill throughout the country — as well as a Le Mans–winning D-type, and the prototype XJ13. Key show cars, like the actual E-type that debuted at the New York Auto Show, will also be on display.

The company that became Jaguar began in 1922 as a manufacturer of motorcycle sidecars, established by Sir William Lyons and William Walmsley as the Swallow Sidecar Company. The Jaguar name first appeared in 1935 on a 2.5-liter saloon (sedan), and was adopted by the company as a whole in 1945. New models arrived soon after World War II, and Jaguar won the epic 24 Hours of Le Mans in 1951, ’53, ’55, ’56 and ’57 and the prestigious Monte Carlo Rally in 1956. Jaguar returned to the podium at Le Mans in 1988 and ’90. Now, as Jaguar celebrates “75 years of looking forward,” style, luxury, performance and elegance continue as hallmarks.

In addition to Jaguar, the 60th Pebble Beach Concours will feature Alfa Romeo and Pierce-Arrow, showcase Italian designer Ghia, and include special classes focusing on the 50th anniversary of the Ferrari 250 GT SWB Berlinetta, the centennial of the Indianapolis 500, Hot Rod lakesters and Bonneville racers, and Prewar American Motorcycles.