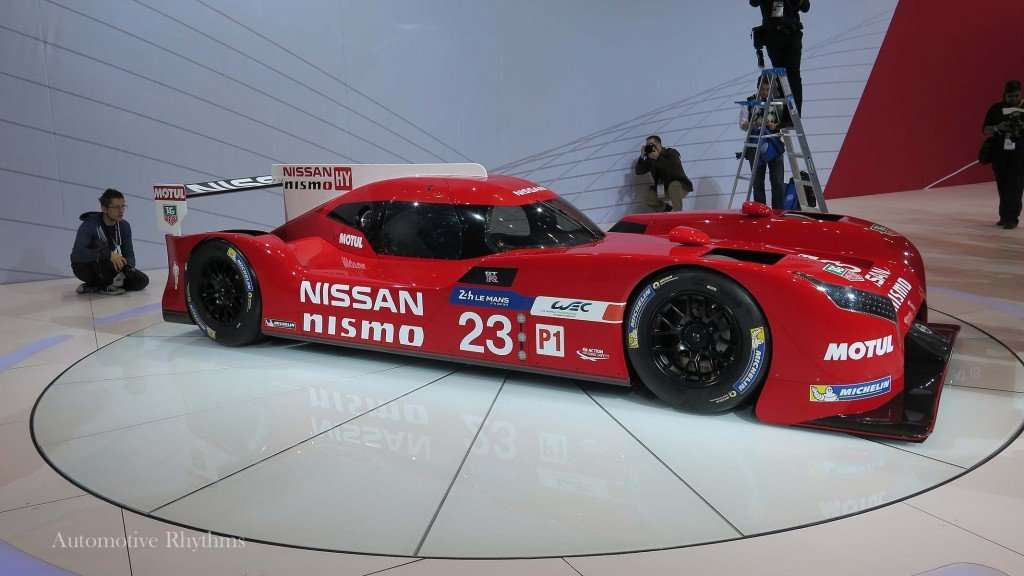 As usual it was a typical cold and wintry day in the Windy City for media day at the 2015 Chicago Auto Show which was hosted by the Chicago Automobile Trade Association and their exhibitors such as Nissan, Kia, Honda, Chevrolet, Acura, Mitsubishi, Ram, Ford, Toyota, BMW and many more. The public action commences February 14th at McCormick Place and can be socially communicated through the hashtag #CAS15.

Nissan warmed up the temperature during their welcome reception held at Venue One by unveiling the innovative Nissan GT-R LM NISMO racing car. Journalists and photographers bum rushed the makeshift stage jocking for pole position to view and shoot the electrifying vehicle. Lucas Ordóñez and Jann Mardenborough, the 2008 and 2011 Winners of GT Academy, were selected to join the Nissan NISMO LM P1 team alongside established NISMO racer Michael Krumm. “I want to show that there is a different route to the top of motorsport – than just years and years of expensive go karting – by winning at Le Mans,” said Mardenborough. “It’s an honor for me to be chosen to compete in LM P1 for Nissan. I have raced at Le Mans twice in LM P2 so I have seen the current LM P1 cars at very close quarters out on the track. To think I will be racing one this year is very exciting. The Nissan GT-R LM NISMO looks set to be an historic race car and I get to drive it.” Michael Krumm brings a dearth of technical knowledge and vehicle development to the squad and is actually the first man to pilot the GT-R LM NISMO.

“Jann and Lucas have proved their merit as professional racing drivers time and time again, not least with their Le Mans podium finishes,” said Darren Cox, Global Head of Brand, Marketing & Sales, NISMO. “What looks like an overnight success is years of incredibly hard work by Jann, Lucas and the Nissan NISMO team that develop all of the winners of Nissan GT Academy.” 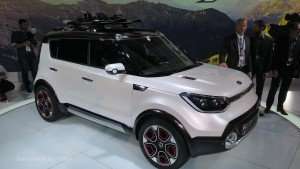 Activities got under way bright and early for the show’s first media day at the MAMA, Automotive Alliance and Chicago Auto Show breakfast where Alan Batey, General Motors’ executive vice president and president, North America engaged the audience with his love for the domestic automaker along with the keystone on why auto consumers need both trucks and electric vehicles in their lives.

Kia entered the stage with a kickoff performance by Chicago’s very own Catch Band and then showed their Super Bowl Spot with the 2016 Sorento alongside Irish actor Pierce Brosnan. With twenty record setting years Michael Sprague bragged about their twenty vehicles launched since 2009 and passing the 500,000 sales mark for the third year in a row. Everything they do is passionately designed he added. Now the Korean automaker embarks on another journey with a freedom fighting spinoff of the Soul they dub the Trail’ster Concept, which can go where no Soul has gone before. Soul owners are very active and the Trail’ster AWD will set them free. The goal was to accentuate the lightweight character of the soul with focus on key points including the retractable cloth top, Fire Red wheel accents and a hybrid powertrain that puts out 34% more horsepower than the current Soul.

Honda was up next with their all-new 2016 seven and eight-passenger Pilot CUV. I prefer the option with dual captain chairs that allow third-row occupants to walk through both seats to reach the back. Also, a one-touch button tilts and slides the second row seat forward for optimal egress and ingress. A 3.5-liter direct-injected V6 with greater power and efficiency, along with weight reduction and added length increases the utility and versatility of this now stylish CUV. 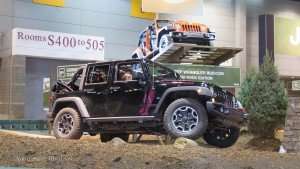 Some of the exciting activities taking place for showgoers include Jeep’s off-road course, Chrysler’s test-drive tracks, Toyota’s Indoor Camry driving experience, Ford’s mini F-150 rodeo drives for the kids, the Chrysler 200 virtual reality simulator which demonstrates the steps in building a vehicle, the Viper 1 of 1 custom program where 8,000 colors can be chosen to differentiate your super car from the rest, and Hyundai’s SEMA tuner cars and racing games. Also, don’t miss out on the Concept & Technology Garage.

One of the apexes of the Chicago Auto Show was the prolific Ford GT, which is the pinnacle of Ford Racing. The lightweight carbon machine was shown for the first time in Liquid Silver with Black racing stripes here in Chicago and stores the most powerful, naturally-aspirated engine ford builds. The company is launching seven new vehicles in the U.S. this year including the 2016 Police Interceptor Utility and Sedan which are built right in the South side of the city. Available in more than eighty countries around the world the Interceptor brand has been a leader in the police market for six decades now. 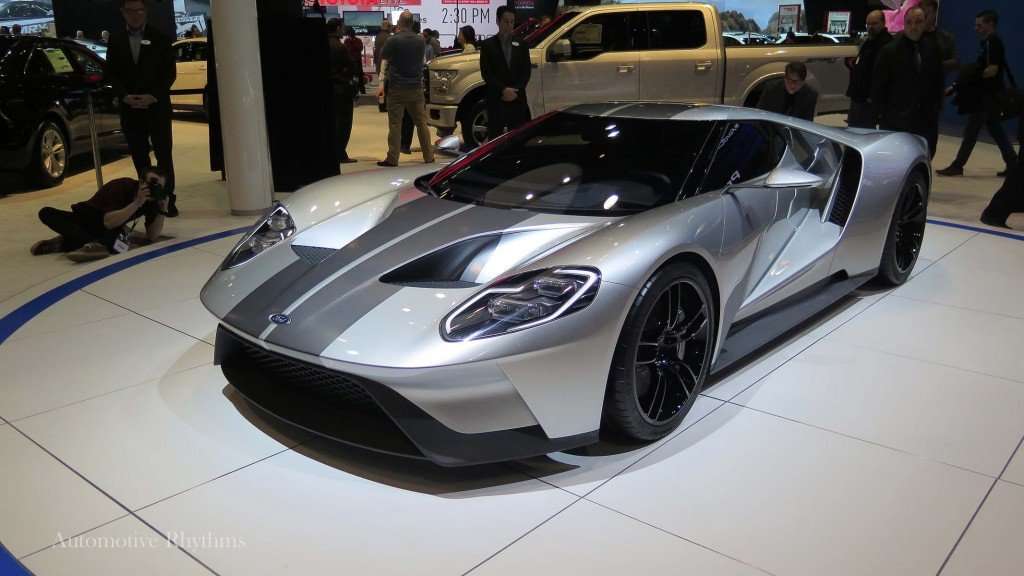 The all-new 2016 Mazda MX-5 showed off its panache with a superior variant termed MX-5 accessories design concept that will hit showrooms this summer. “There is so much MX-5 history at the Chicago Auto Show, and we wanted to continue building on that,” said Jim O’Sullivan, president and CEO, Mazda North American Operations. “The MX-5 is the soul of our company, and its enthusiast following both inside and outside of Mazda drives us to keep innovating new ideas for it and the rest of our lineup.” A few specifics include an Aero Kit, BBS Wheels, Brembo Brakes and a Luggage Rack. 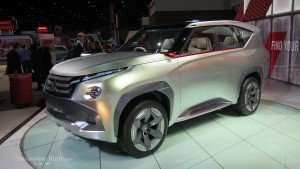 Mitsubishi joined the concept party, along with Buick and their Avenir (means “future” in French) by showboating the 25-mile electric range Concept GC-PHEV. It’s doubtful the science fiction plug-in hybrid electric vehicle (PHEV) will see the light of day as a production vehicle, but the full-size SUV does offer insight into the Japanese brand’s design future. The Concept GC-PHEV is energized by a 335-horsepower supercharged MIVEC V-6 engine/electric motor, an 8-speed automatic gearbox and Super All-Wheel Control (S-AWC) all-wheel drive. It is also instilled with “Connected Car” Technology, Pedestrian Collision Mitigating Auto-braking, Rearward Blind Spot Vehicle Warning, Unintentional Vehicle Move Off Control and Driver Monitor to name a few. “We brought the Concept GC-PHEV to Chicago because it showcases into our future technology and design themes,” said MMNA Executive Vice President, Don Swearingen. “All of our 2016 model year vehicles will be refreshed with our new brand identity, starting with the 2016 Outlander, which will make its world premiere at the New York International Auto Show in April.”

Make sure to get on down to the consumer days if you reside in Chicago. If not, then please enjoy our photo gallery.

Free2Move shakes up the car rental market in Washington D.C.!