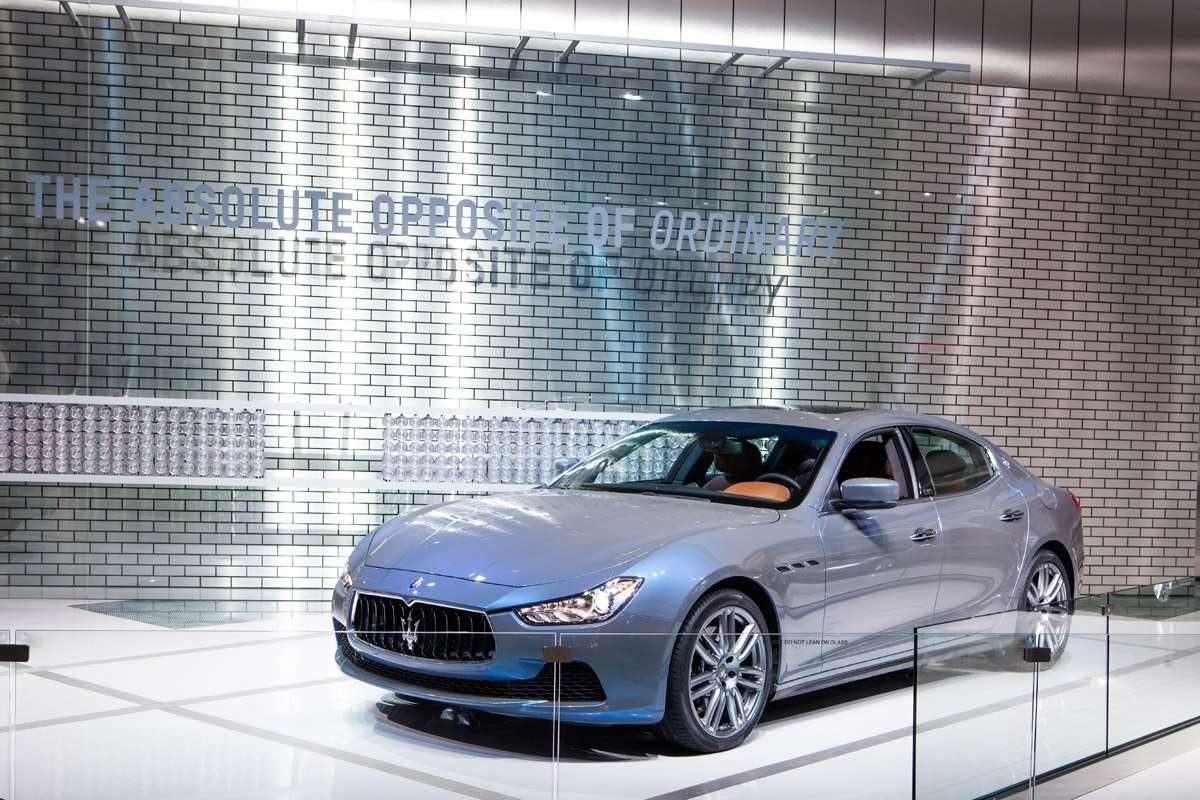 The Ermenegildo Zegna and Maserati collaboration is an extension of a partnership between these two Italian powerhouses which previously created the Quattroporte Zegna Limited Edition, which was limited to 100 examples worldwide. The newly-debuted Ghibli Ermenegildo Zegna Edition concept is based on the S Q4 version of the Ghibli and provides a first glimpse at Maserati’s possible future product line-up.

In addition to being the Trident’s best sales year on record, 2014 also marked the 100th Anniversary of Maserati, which the brand celebrated worldwide with an array of special events for its valued clients and fans. “We are proud to end 2014 on such a high note, expanding our dynamic product portfolio, entering new segments, and reinvigorating the Maserati brand,” says Harald Wester, CEO of Maserati. “We are fiercely confident in the future of Maserati design, as seen with the spectacular Alfieri and Ghibli Ermenegildo Zegna design concepts here today, as both are cues of what’s to come from the Trident. And, we are committed defining ‘the absolute opposite of ordinary’ in everything that we do, reaffirming our unique positioning in the luxury sports car market,” he concludes.

Maserati has gained solid momentum this past year, reporting a significant boost in sales worldwide and record increases North America, the Trident’s global market leader, and closed out 2014 with a record number of sales, representing the highest sales in the company’s one hundred year history.

In 2014, Maserati sold approximately 36,500 cars worldwide, an increase of 136% compared to 2013 and almost 6 times the sales figure for 2012. There was growth in all the main markets in which Maserati operates: the major milestone was achieved thanks to the sales volumes generated by the Ghibli, the brand’s first E segment executive saloon, followed by the Quattroporte, the luxury flagship saloon, and the exclusive range of GranTurismo and GranCabrio sports cars.

23,500 Ghiblis were delivered to the network, while the figure for the Quattroporte was 9,500 units. The total was completed by 3,500 units of the GranTurismo and GranCabrio models. The American market, with 14,690 units and growth of 110% compared to 2013, confirmed its status as Maserati’s biggest market in 2014, with sales boosted by the Ghibli and Quattroporte versions equipped with the 410 HP Twin Turbo engine and Q4 all-wheel drive.

The second largest market in terms of volume was China, with 9,400 units and growth of 148% compared to 2013; the best-selling Quattroporte and Ghibli versions were those with 330 HP Twin Turbo engine and rear-wheel drive. In spite of the widespread economic instability, Europe also recorded a large rise of 153% compared to 2013, with no fewer than 6,360 units sold. The market leading Quattroporte and Ghibli versions were the rear wheel drive versions with the 275 HP V6 Turbo Diesel engine.

Performance in the Asia-Pacific area (excluding China) was excellent, with 4,000 units, representing a 206% increase over 2013. The results achieved in the Middle East were also very impressive, with 2,050 units sold and a growth of 144% compared to 2013. 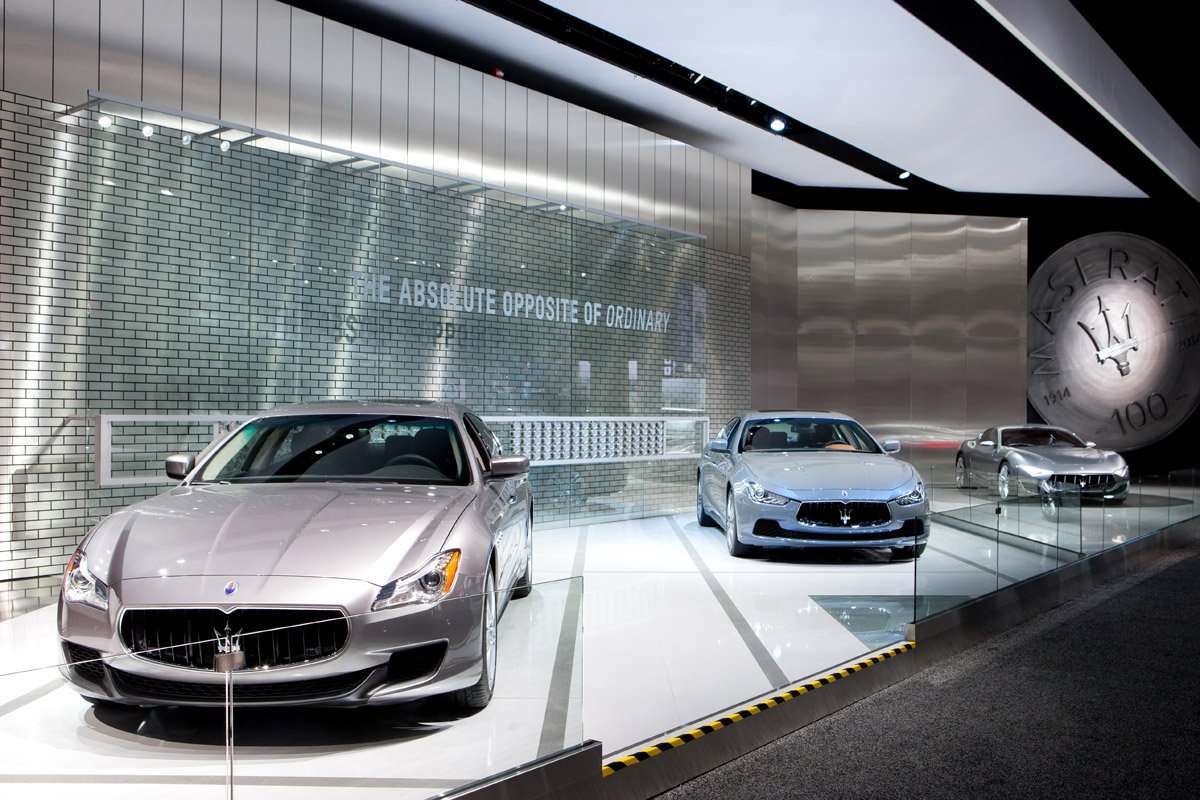 Beginning with a new exterior color, Azzurro Astro, a sinuous and specially fashioned exclusively with Zegna, the concept is a scene stealer. This special trimmed Ghibli S Q4 enhances its character to create the ultimate contemporary look. The interior features Zegna-inspired materials and trims with special contrast color combinations of the finest Italian leather and 100% Italian natural fabrics. The result is a bold and contemporary product fashioned for the detail-oriented enthusiast and tailored for connoisseurs of luxury. It pays tribute to the harmony of opposites, a stylistic synthesis between sophisticated design and technological dynamism.

The new, exclusive exterior Azzurro Astro color (triple layer of pigment) volume, shine and iridescence to the finish, which is enhanced by iridescent highlights blue and ash grey. The aluminum pigments used for this special color magnify the vehicle’s exterior lines and bring out the muscular profile of its bodywork. The car’s sculpted outline is enhanced by the color used, while the transparent top coat adds another layer of depth and high gloss shine. The exterior is further distinguished by 20” Urano design high-polished alloy wheels, with a distinctive color that was carefully conceived for this concept car named Liquid Metal. The futuristic wheel design emphasizes its sporty style, high tech appeal and luxury finishes.

The shared experience with the Quattroporte Zegna Limited Edition helped Ermenegildo Zegna create a pure silk fabric that combines its quintessential soft feel with an elegant yet technical look. The passenger compartment is dressed in leather tones and Zegna anthracite silk. The natural color leather of POLTRONA FRAU is matched with Ermenegildo Zegna’s micro-chevron silk weave. Silk, an inherently sophisticated material, is further embellished by the hand-stitched macro-chevron pattern and finished off by the seat piping. The door panels also feature matching salt and pepper silk jersey and rib embroidery. The seat cushions feature extra fine grain, natural color leather with contrast light grey stitching, which matches a silk insert with a micro-chevron weave on the central seat and backrest area, also with a special macro-chevron weave.

On the door panels, the center panel is covered with Zegna silk Jersey and embellished with a diagonal roll pattern, quite unique for the interior of a vehicle. The same fabric is used to cover the car’s roof lining, top pillars and sun shades, carrying “Ermenegildo Zegna Exclusively for Maserati” brand labels. Other sophisticated and beautifully appointed luxurious finishes include the signature Trident emblem with contrast stitching on the headrests. The sophisticated, luxury finish of the car interior is also expressed by the headrests, featuring an embroidered Trident emblem and contrasting stitching. Glossy and decorative carbon fiber inserts are applied to the massive central tunnel and door panels. Other added touches include black mat covers with special leather inserts with the Ghibli name embroidered.These are finished off by a natural color leather edge and fixed to the car floor with buttons machined from billet aluminum. The door sill plates are also crafted of billet aluminum and satin-finished with a glossy carbon fiber insert, marked by the Maserati trident logo. For the final touch, an Ermenegildo Zegna Edition plate is applied to the central pillar and tunnel between the two front seats.

The car is powered by the high-performance 410 HP V6 Twin-Turbo engine, with “Q4” all-wheel drive system, ensuring 0 to 60 mph acceleration in just 4.7 seconds, thanks to 406 ft-lbs of torque and fully capable of reaching a top speed of 175 mph.

Created to commemorate Maserati’s Centennial, the Alfieri—which takes its name from Alfieri Maserati, the most prominent of the Maserati brothers—explores the stylistic heritage of the brand and anticipates future design trends. A sleek, Italian style 2+2, today’s Alfieri is at the concept stage, yet poised for reality: it was created, designed and built with this goal in mind. Recently revealed in the U.S. at the Los Angeles Motor Show, the Alfieri has received praise from around the world.

This concept interprets Maserati’s most iconic signatures: restyled triple air ducts on the wheel arches; the Trident emblem in a central position on the front grille; the “Saetta” logo on the rear pillar; and forged wheels whose spoke design gives a nod to the Trident profile. The designers’ brief was simplicity and minimalism with a “kick of poetry” to create the comfortably sized 2+2 seat passenger compartment while emphasizing the racing nature of the brand.

Poltrona Frau aniline leather has been generously used for the interior, matched with copper, aluminum and other materials reminiscent of oxidized steel, commonly used in the racing cars of the Fifties. Vintage racing also inspires the wraparound design of the seats, offset by their futuristic look and modern structure. One of the most fascinating cars of all times designed by Pininfarina in 1954, the A6GCS proved a valuable source of inspiration for the designers of the Alfieri concept of today.

Now on sale, the 2015 Quattroporte range includes enhancements and added standard equipment for both S Q4 and GTS. The 2015 Quattroporte S Q4 – with 404 HP, state-of-the-art twin-turbo V6 engine and standard all-wheel drive the selection of options has been expanded to include three new paint finishes (Grigio, Grigio Maratea and Bianco Alpi). Two new wheels become available: 19” Apollo wheel with a diamond-smoothed, matt transparent anthracite finish and 20” GTS design wheel in silver finish. A wider selection of interior features is available including contrast stitching, red leather upholstery and Black Piano Lacquered trim. Wifi in vehicle hotspot also becomes standard on the Quattroporte range. The top of the range, Quattroporte GTS, with 523 HP from its potent twin-turbo V8 powering the rear wheels – benefits from a sportier and aggressive appearance, heightening its dominance on the road while further differentiating its position at the very top of the range.

Maserati has weathered the winter well with the all-wheel drive Ghibli and Quattroporte S Q4 performance sedans, the Trident’s top-selling vehicles in North America. The S Q4 Quattroporte keeps a firm footing with its all-wheel drive capabilities, perfect for all weather conditions, its success has helped sustained the brand’s success across the U.S. and Canada.